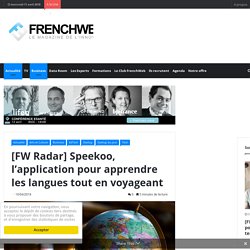 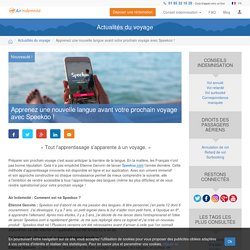 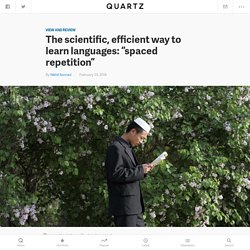 After two centuries of cranberry-free Thanksgivings, the fruit quietly became a holiday staple thanks to US general Ulysses S. Grant’s 1864 holiday feast. It slipped into lunch sacks across America by pioneering juice boxes, and craftily came to dominate the juice aisles by commingling with apple juice. In the 1990s, a little shape-shifting allowed dried cranberries to infiltrate baked goods and trail mixes. In recent years, it crept its cranberry creep over to China, nestling into the palms of health-conscious young people across the Middle Kingdom.

And now, the bitter red bog-berry finds itself in the midst of the burgeoning US-China trade war. 5 Major Disadvantages of Using Language Learning Apps. I am one of the biggest fans of digitizing the classroom and the use of language learning apps and strategies. 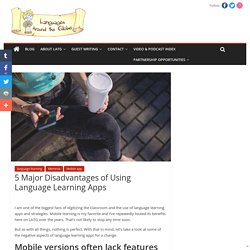 Mobile learning is my favorite and I’ve repeatedly touted its benefits here on LATG over the years. That’s not likely to stop any time soon. Why learn a foreign language? Goals, aims and motivations. There's at least a dozen reasons why you might be learning a language. 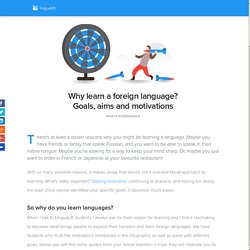 Maybe you have friends or family that speak Russian, and you want to be able to speak in their native tongue. Maybe you're looking for a way to keep your mind sharp. Or, maybe you just want to order in French or Japanese at your favourite restaurant! With so many possible reasons, it makes sense that there's not a one-size-fits-all approach to learning. Global Survey Reveals Why the World Learns Languages Online. New York, NY (PRWEB) January 20, 2016 56 percent of global users of Babbel – a market-leading language learning app – say that being able “to communicate better while traveling” is a top motivator for learning a new language. 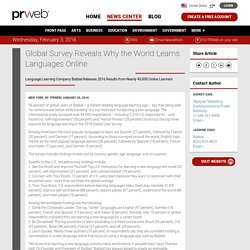 The international study surveyed over 44,000 respondents – including 2,510 U.S. respondents – and found out “self-improvement” (50 percent) and “mental fitness” (28 percent) round out the top three reasons for language learning in the 2016 Global User Survey. Among Americans the most popular languages to learn are Spanish (27 percent), followed by French (20 percent), and German (17 percent). According to those surveyed around the world, English tops the list as the most popular language learned (28 percent), followed by Spanish (18 percent), French and Italian (13 percent), and German (9 percent).

The survey includes findings broken out by country, gender, age, language, and occupation. Specific to the U.S., notable survey findings include: 1. Litreview. Top 10 Most Useful Languages, Important, Influential. Knowing a second language is a highly desirable trait in today’s world, especially if your work or hobbies have an international focus. 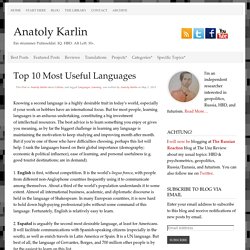 But for most people, learning languages is an arduous undertaking, constituting a big investment of intellectual resources. The best advice is to learn something you enjoy or gives you meaning, as by far the biggest challenge in learning any language is maintaining the motivation to keep studying and improving month after month. But if you’re one of those who have difficulties choosing, perhaps this list will help. I rank the languages based on their global importance (demography; economic & political influence), ease of learning, and personal usefulness (e.g. good tourist destinations; are in demand). 1. 2. File:List of languages by number of native speakers.png.

Top 10 important languages to learn. “If you talk to a man in a language he understands, that goes to his head. 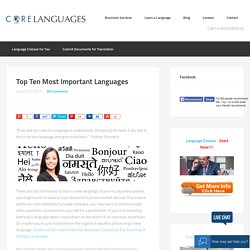 If you talk to him in his own language, that goes to his heart.” List25. If any of you have ever tried learning a foreign language you know that the hardest step is often the first – choosing which one. 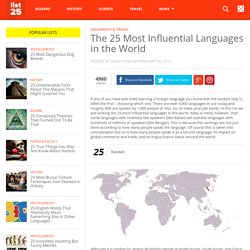 There are over 6,000 languages in use today and roughly 30% are spoken by 1,000 people or less. So, to make your job easier, in this list we are ranking the 25 most influential languages in the world. Languages for the future report. Facts & Figures - Mercator Research Centre. As defined by the European Charter for Regional or Minority Languages (ECRML), “regional or minority languages” are languages traditionally used within a given territory of a state by nationals of that state who form a group numerically smaller than the rest of the state’s population; they are different from the official language(s) of that state, and they include neither dialects of the official language(s) of the state nor the languages of migrants. 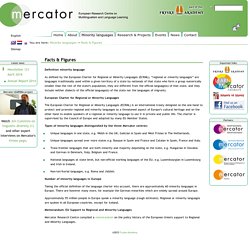 European Charter for Regional or Minority Languages The European Charter for Regional or Minority Languages (ECRML) is an international treaty designed on the one hand to protect and promote regional and minority languages as a threatened aspect of Europe’s cultural heritage and on the other hand to enable speakers of a regional or minority language to use it in private and public life. The charter is supervised by the Council of Europe and adopted by many EU Member States. Unique languages in one state, e.g. Cramlap: CRAMLAP. Langues régionales et minoritaires - Commission européenne. Chart: Europe's Second Most Useful Foreign Languages. There are 23 officially recognised languages within the European Union while there are more than 60 indigenous regional and minority languages. 54 percent of Europeans are able to have a conversation in one additional language while 25 percent can converse in two.

Read2. How to learn a new language: 7 tips from TED Translators. Knowing more than one language is great for your brain. But what’s the best way to learn? TED’s Open Translation Project volunteers share 7 tips: 1. Get real. Decide on a simple, attainable goal to start with so that you don’t feel overwhelmed. 2. The Best Method to Learn English. What is the best teaching method for learning English? According to academic research, linguists have demonstrated that there is not one single best method for everyone in all contexts, and that no one teaching method is inherently superior to the others. Also, it is not always possible – or appropriate – to apply the same methodology to all learners, who have different objectives, environments and learning needs. Applying the most appropriate method for that learner’s specific objectives, learning style and context.

An experienced professional language teacher always adopts the Principled Eclecticism approach, deciding on the most suitable techniques and applying the most appropriate methodology for that learner’s specific objectives, learning style and context. Methods of teaching English have developed rapidly, especially in the previous 40 years. How to Learn a Language. Your best starting point is to have either a pressing need, or a powerful desire to master the language. This may seem obvious, but interest combined with passion brings the best results. If you're not really enthusiastic about learning the language, then you will end up stalling or quitting. Your sustained interest is decisive - which is why courses with a teacher often work better than teaching yourself, as the structured setting and company can carry you over the inevitable slumps.

Language pedagogy. Language pedagogy[definition needed] may take place as a general school subject, in a specialized language school, or out of school with a rich selection of proprietary methods online and in books, CDs and DVDs. There are many methods of teaching languages. Some have fallen into relative obscurity and others are widely used; still others have a small following, but offer useful insights. There are three principal views: The structural view treats language as a system of structurally related elements to code meaning (e.g. grammar).The functional view sees language as a vehicle to express or accomplish a certain function, such as requesting something.The interactive view sees language as a vehicle for the creation and maintenance of social relations, focusing on patterns of moves, acts, negotiation and interaction found in conversational exchanges.

Theconversation. From busuu to Babbel, language-learning startups adapt to thrive. Best-of. Apprendre les langues étrangères. Comment Apprendre une Langue. The Glossika Blog. Oral Comprehension (listening) How many languages are there in the world? Which are the world's most influential languages? Future - The invented language that found a second life online. Do Language Apps Like Duolingo Work?

Does Duolingo Even Work. 12 Ideas For Making the Perfect Language Learning App by Fluent Language.