The Difference Between Knowledge and Experience 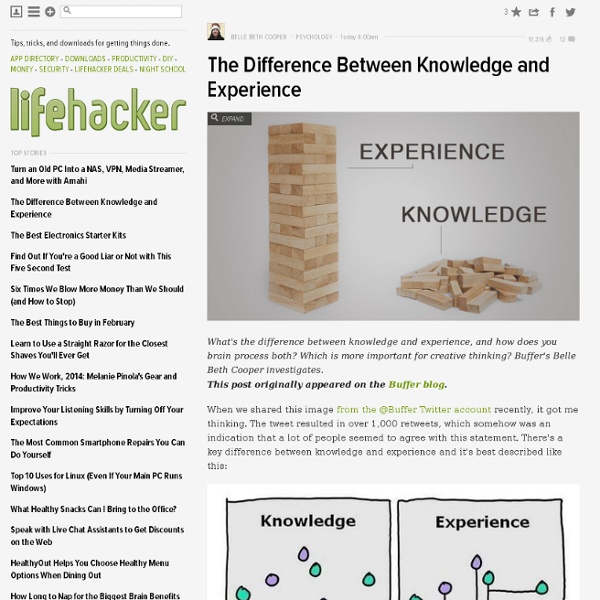 SExpandWhat's the difference between knowledge and experience, and how does you brain process both? Which is more important for creative thinking? Buffer's Belle Beth Cooper investigates. This post originally appeared on the Buffer blog. P When we shared this image from the @Buffer Twitter account recently, it got me thinking. what is this?? The original is from cartoonist Hugh MacLeod, who came up with such a brilliant way to express a concept that's often not that easy to grasp. This is a really fun, inspiring topic to read about, so I collected some quotes and advice from my favorite creative thinkers about the importance of making connections in your brain. Intelligence and Connections: Why Your Brain Needs to Communicate Well with ItselfP Research from the California Institute of Technology showed that intelligence is something found all across the brain, rather than in one specific region:P Connections Fuel Creativity: Nothing Is OriginalP Creativity is just connecting things.

Shifting to 21st Century Thinking » A Change Theory: Key Concepts for Understanding the Work of Robert Kegan General Rationale and Approach In over our heads: Robert Kegan believes that the constantly changing demands of modern life may be developmentally inappropriate for many—perhaps even most—adults. We should no more blame or punish adults for their inability to meet the challenges of their lives than we would punish an infant for not being able to turn over, or a five-year-old who had not mastered abstract thinking.

s'artiser vite_fait My mother is a self-taught painter—one of her watercolors hangs framed in our living room. I, on the other hand, can barely draw a dog. My lack of skill in the visual arts never really bothered me until I had a child. Are computers in class a scandalous waste of money? Are computers in class a scandalous waste of money? A top Australian school has banned laptops in class, warning that technology “distracts’’ from old-school quality teaching. I’m in rather furious agreement with the opening statement to the 26 March article in The Australian entitled “Computers in class ‘a scandalous waste’: Sydney Grammar head” by Natasha Brita (if the article is blocked, search for “computers are a scandalous waste”) And that is where the bulk of agreement ends. One would rather hope that “old school” teaching with its emphasis on rote learning, teacher centred practices and note taking by hand would be challenged by more student centred teaching that enables students to think, engage and explore by leveraging digital learning to gain a deeper understanding of a topic. It is quite illuminating to see the bow tied teacher in the article’s photo with the Year 7 students in their rows with the ultra short throw Interactive whiteboard (IWB) in the background.

mythe binaire by Maria Popova What Aristotle has to do with Tiger Woods and the story of the world. The dichotomy of good and evil is as old as the story of the world, and timeless in its relevance to just about everything we do in life, from our political and spiritual views to our taste in music, art and literature to how we think about our simple dietary choices. But while most of us recognize that these concepts of good and bad aren’t always black-and-white categories, we never cease to be surprised when someone or something we’ve perceived as “good” does or becomes something we perceive as “bad,” from an esteemed politician’s transgression to a beloved celebrity’s slip into addiction or scientology or otherwise socially undesirable behavior. In Out of Character: Surprising Truths About the Liar, Cheat, Sinner (and Saint) Lurking in All of Us, researchers David DeSteno and Piercarlo Valdesolo explore this curious disconnect through the rigorous lens of science.

Quotes to Provoke Technology-inspired Teaching and Learning - Read Write Respond flickr photo shared by mrkrndvs under a Creative Commons ( BY-NC-SA ) license In a recent post, Diane Kashin shared a series of quotes associated with Reggio-inspired learning. After being inspired and provoked, it got me thinking about technology and provocations that could be used to help dig deeper into digital pedagogies.

breaked cogito By Maria Popova We’ve already explored the origins of sex, the neurochemistry of heartbreak, and how drugs affect desire. But what, exactly, happens in the brain when the body belts out its ultimate anthem of sexual triumph? Count on creative duo Mitchell Moffit and Gregory Brown, better known as AsapSCIENCE — who have previously explained how music enchants the brain and what science teaches us about curing hangovers — to break down the body’s response during orgasm: But what about sexual experiences that don’t involve direct contact with a partner?

25 years of EdTech – 1997: Constructivism In 1997 web based learning was getting a lot of traction, and with it people began to look around for new models of teaching. So for 1997 I’m not focusing on a technology, but rather an educational theory because there’s education in educational technology after all. Constructivism was by no means new, dating back to Piaget, Vygostky and Bruner. The principal concept of constructivism is that learners construct their own knowledge, based on their experience and relationship with concepts. It’s a (sometimes vague) learning theory rather than a specific pedagogy, so how it is implemented varies.

interact solitons A new record for long-range, weak interactions between solitons has been reported by researchers in New Zealand. Two solitons in the same system were seen to affect each other through ultrasound waves as they travelled round a loop of fibre-optic cable. The consequences of this interaction, which caused the trailing soliton to be attracted or repelled by its leading partner, were only visible when the pulses had travelled more then one astronomical unit (AU). Astronomical speeds The researchers observed this effect in a 100-m-long loop of optical fibre. Failures in Education: Constructivism and 21st Century Skills – Missouri Education Watchdog Education is global and 21st Century skills are pursued in many countries based on theories from education reformers and non-governmental organizations. Newly trained teachers have been taught children have been mis-educated and cannot possibly compete in the global workforce. What is needed in current and future educational goals should not be decided by local communities, it should be planned by private organizations such as Council of Chief State School Officers (CCSSO) here in the United States or by such organizations as the Global Education Reform Movement (GERM). The NGOs insist their educational involvement and direction will raise educational attainment and help ensure a work-ready citizenship. The standards and changes in teaching (teachers becoming ‘guides on the side’ instead of traditional lecturers) touted by professional development trainers will unleash learners’ desire to learn and the student will experience knowledge and insight which that student believes is true.

School technology not delivering as promised – is it actually more of a distraction than a help? – Missouri Education Watchdog The difference between promise and delivery for technology in the classroom today is causing teachers to have to span an impossibly wide gap. Two years ago Superintendents were asked to sign a Future Ready technology pledge which asked them to do everything they could to bring technology into their schools. The vision that pledge created was of students diligently working on some sort of device not only learning core subject material in an exciting and innovative way, but also becoming little technology experts themselves. Digital Natives, Yet Strangers to the Web When Reuben Loewy took up his first teaching gig in 2012, he had a major revelation: The digital revolution has dramatically transformed the way that kids perceive reality. Perhaps that makes the 55-year-old teacher sound like a dinosaur. What he discovered is, after all, one of the most obvious realities shaping education policy and parenting guides today.

7 Digital Learning Theories and Models You Should Know While pursuing our teaching degrees we were introduced to various learning theorists and their insights about how people learn best. Some familiar names, included Piaget, Bandura, Vygotsky, and Gardner. Although understanding these theories is still important, we also need to become familiar with theories, models, and approaches, which provide us insight on how technology, social media, and the Internet impact our learning. Digital learning theories and approaches, such as RAT, SAMR, TPACK, Digital Blooms, Connectivism, Design Thinking and Peeragogy, help teachers develop curricula that gets students to use technology to research, curate, annotate, create, innovate, problem-solve, collaborate, campaign, reform and think critically.

EdTech Research - Where to Publish, How to Share (Part 1): Journal Overview - AACE You have implemented and evaluated an educational technology project, engaged in the Scholarship of Teaching and Learning, conducted an empirical study, written a literature review, or undertook an ethnographic journey of discovery. Whatever your research endeavor, at some point you will be contemplating if, how and where to share your insights. Oftentimes, the best place to start is a conference presentation, blog post or online report. After refining the presentation based on peer feedback, many researchers will consider submitting their work to a journal for wider dissemination in scholarly circles.