Matt Taibbi on Politics and the Economy 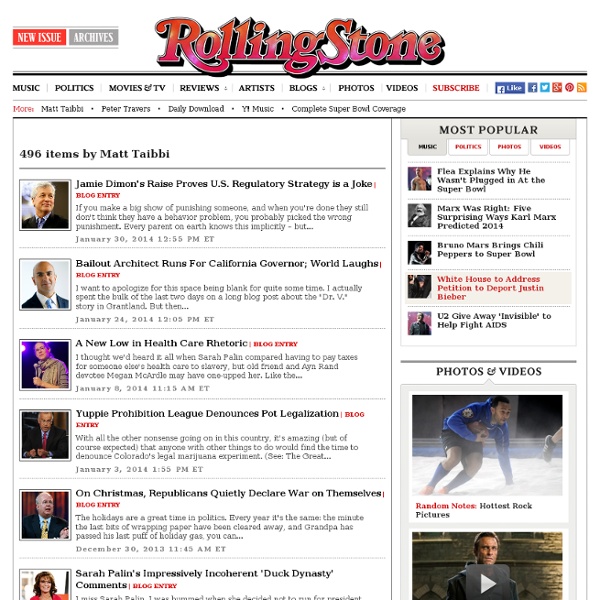 Thank You, Rolling Stone | BLOG ENTRY Today is my last day at Rolling Stone. As of this week, I’m leaving to work for First Look Media, the new organization that’s already home to reporters like Glenn Greenwald, Jeremy Scahill and Laura Poitras. I’ll have... February 20, 2014 10:35 AM ET Ex-Morgan Stanley Chief Jams Foot in Mouth, Complains of CEO Abuse | BLOG ENTRY There's a ton of interesting stuff going on in the Wall Street sphere of late – I'm trying to find some time to do a proper write-up of the extraordinary lawsuit just filed by the Better Markets... February 13, 2014 5:30 PM ET The Vampire Squid Strikes Again: The Mega Banks' Most Devious Scam Yet | ARTICLE Call it the loophole that destroyed the world. It's 1999, the tail end of the Clinton years. Democrats Must Stop Ted Cruz's Hollywood Ending | BLOG ENTRY Having lived in the former Soviet Union for 10 years, I will forever have plastered to the back of my cerebellum the commemorative bumper sticker: "WWSD?"

Chris Hedges, Columnist Chris Hedges Chris Hedges, whose column is published weekly on Truthdig, has written 11 books, including the New York Times best seller “Days of Destruction, Days of Revolt” (2012), which he co-authored with the cartoonist Joe Sacco. Some of his other books include “Death of the Liberal Class” (2010), “Empire of Illusion: The End of Literacy and the Triumph of Spectacle” (2009), “I Don’t Believe in Atheists” (2008) and the best selling “American Fascists: The Christian Right and the War on America” (2008). His book “War Is a Force That Gives Us Meaning” (2003) was a finalist for the National Book Critics Circle Award for Nonfiction. Hedges previously spent nearly two decades as a foreign correspondent in Central America, the Middle East, Africa and the Balkans.

In 2000, Too Many Liberals Told Themselves Election Didn't Matter. Will The Same Thing Happen In 2012? The presidential election of 2000 still makes me angry. Mostly that’s because of the grotesque way it ended, with five Republican-appointed Supreme Court justices shutting down the Florida recount. But partly that’s because of the liberal apathy that first put the outcome into doubt. Economy of Singapore Singapore could thus be said to rely on an extended concept of intermediary trade to Entrepôt trade, by purchasing raw goods and refining them for re-export, such as in the wafer fabrication industry and oil refining. Singapore also has a strategic port which makes it more competitive than many of its neighbours in carrying out such entrepot activities. Singapore has the highest trade to GDP ratio in the world, averaging around 400% during 2008–11.[24] The Port of Singapore is the second-busiest in the world by cargo tonnage.

The Official Paul Krugman Web Page News!! I am starting up my Princeton web site. It is at www.wws.princeton.edu/~pkrugman/ It's only partial, but eventually all files will move. I'm back! Monaco Monaco i/ˈmɒnəkoʊ/, officially the Principality of Monaco (French: Principauté de Monaco (French pronunciation: ​[prɛ̃sipoted(ə) mɔnaˈko]); Monégasque: Principatu de Múnegu; Italian: Principato di Monaco; Occitan: Principat de Mónegue), is a sovereign city-state, located on the French Riviera in Western Europe. It is bordered by France on three sides; one side borders the Mediterranean Sea. Monaco has an area of 2.02 km2 (0.78 sq mi) and a population of 36,371; Monaco is the second smallest and the most densely populated country in the world. Monaco has a land border of 4.4 km (2.7 mi), a coastline of 4.1 km (2.5 mi), and a width that varies between 1,700 and 349 m (5,577 and 1,145 ft).

Katha Pollitt What should we call the position that the woman who is pregnant should decide whether she keeps the pregnancy or ends it? My column on Planned Parenthood’s semi-retirement of the word “pro-choice” got a lot of responses. Pro-rights, pro-woman, pro-freedom, pro-liberty, plus some thumbs-up for pro-choice—after all, we already know what it means. Here’s a selection of e-mail responses and comments I received when I sent my column out to my usual list, but forgot to use bcc, sparking a lively discussion (and a few irate demands to be left in peace). Lindsay Beyerstein, lead writer, Sidney Hillman Foundation I’m a pragmatist. Austerity Works As Greece, and now Spain and Italy, struggle with the crushing burden of debt brought on by the modern welfare state, perhaps we should shift our gaze some 1,200 miles north to see how austerity can actually work. Exhibit #1 is Estonia. This small Baltic nation recently had a spate of notoriety when its president, Toomas Ilves, got into a Twitter debate with Paul Krugman over the country’s austerity policies. Krugman sneered at Estonia as the “poster child for austerity defenders,” remarking of the nation’s recovery from recession, “this is what passes for economic triumph?” In return, President Ilves criticized Krugman as “smug, overbearing, and patronizing.” Twitter-borne tit-for-tat aside, here are the facts: Estonia had been one of the showcases for free-market economic policies and had been growing steadily until the 2008 economic crisis burst a debt-fueled property bubble, shut off credit flows, and curbed export demand, plunging the country into a severe economic downturn.

James Fallows This morning I had the privilege of giving the commencement address at the University of Vermont—UVM, home of the Catamounts, in Burlington. My wife Deb and I, and our colleague John Tierney, visited UVM several years ago and wrote about it in our American Futures series, notably with John’s piece about the school’s emergence as a “public Ivy.” Seven Days, the financially-and-journalistically successful weekly based in Burlington (which I’ve also written about), has a story about today’s commencement, here. The University’s story is here. Since the talk drew on various themes that recur in this “American Futures” thread, I’m attaching the text, below.

It's the Money Supply, Stupid During the 1992 presidential campaign, former President Clinton’s rallying cry was “It’s the Economy, Stupid.” He sang it to perfection and won the election. Today, the smart politicians (and economists) should realize that “It’s the Money Supply, Stupid.” One doesn’t have to delve deeply into the mysteries of money to realize that money matters. Naomi Klein Published at The Intercept Now that it seems virtually certain that Donald Trump will withdraw the United States from the Paris climate accord, and the climate movement is quite rightly mobilizing in the face of this latest dystopian lurch, it’s time to get real about something: Pretty much everything that is weak, disappointing, and inadequate about that deal is the result of U.S. lobbying since 2009. The fact that the agreement only commits governments to keeping warming below an increase of 2 degrees, rather than a much safer firm target of 1.5 degrees, was lobbied for and won by the United States. The fact that the agreement left it to individual nations to determine how much they were willing to do to reach that temperature target, allowing them to come to Paris with commitments that collectively put us on a disastrous course toward more than 3 degrees of warming, was lobbied for and won by the United States.

Gold Backed Currency, Gold Bullion is a Freedom Fighter Lecture by Ferdinand Lips, Zürich (translated from German) The context I will start my talk with an allegation. You have gathered here for a specific reason. John Nichols Protesters in Wisconsin, 2011, where communities are voting to amend the constitution. (Darren Hauck/Reuters) Even as the US Supreme Court attempts to expand the scope and reach of the already dangerous dominance of our politics by billionaires and their willing servants, Americans are voting in overwhelming numbers against the new politics of dollarocracy. The headline of the week with regard to the campaign-finance debate comes from Washington, where a 5-4 court majority has—with its McCutcheon v.

The remarkable story of Chile's economic renaissance Thirty years ago, Chile was a basket case. A socialist government in the 1970s had crippled the economy and destabilized society, leading to civil unrest and a military coup. Given the dismal situation, it’s no surprise that Chile’s economy was moribund and other Latin American countries, such as Mexico, Venezuela, and Argentina, had about twice as much per-capita economic output. Today, by contrast, Chile has passed Argentina to become the richest nation in all of Latin America. For three decades, it has been the fastest-growing economy in the region. Poverty has fallen dramatically, and living standards have soared.