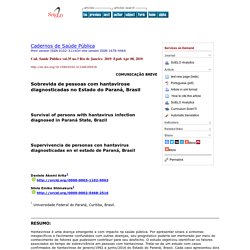 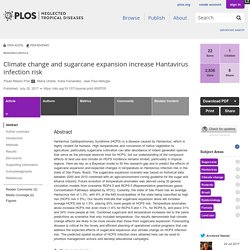 High temperatures and conversion of native vegetation to agriculture, particularly sugarcane cultivation can alter abundance of rodent generalist species that serve as the principal reservoir host for HCPS, but our understanding of the compound effects of land use and climate on HCPS incidence remains limited, particularly in tropical regions. Here we rely on a Bayesian model to fill this research gap and to predict the effects of sugarcane expansion and expected changes in temperature on Hantavirus infection risk in the state of São Paulo, Brazil. The sugarcane expansion scenario was based on historical data between 2000 and 2010 combined with an agro-environment zoning guideline for the sugar and ethanol industry. 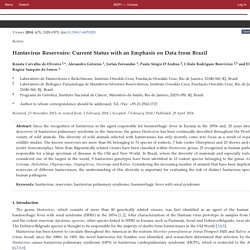 Rodents There are nearly 2200 rodent species worldwide, which represent approximately 42% of all mammalian species [37]. Rodents exhibit an extraordinary variety of ecological and physiological adaptations to almost all terrestrial environments; it can live in high elevations, extreme climates, regions with extensive vegetative cover and regions that are barren. Some species are considered synanthropic because they associate with humans. In urban and rural environments with economic activity, commensal synanthropic species are predominant, as well as some wild species that occasionally invade human dwellings.

Although each hantavirus is predominantly associated with a specific rodent and a particular location, infections in other hosts by the same virus can occur by “spillover” or interspecific transmission. PLOS 25/10/16 Landscape, Environmental and Social Predictors of Hantavirus Risk in São Paulo, Brazil. Abstract Hantavirus Pulmonary Syndrome (HPS) is a disease caused by Hantavirus, which are negative-sense RNA viruses in the family Bunyaviridae that are highly virulent to humans. 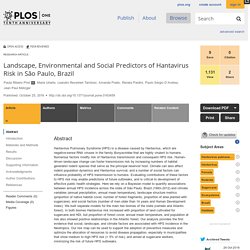 Numerous factors modify risk of Hantavirus transmission and consequent HPS risk. Human-driven landscape change can foster transmission risk by increasing numbers of habitat generalist rodent species that serve as the principal reservoir host. Climate can also affect rodent population dynamics and Hantavirus survival, and a number of social factors can influence probability of HPS transmission to humans. Evaluating contributions of these factors to HPS risk may enable predictions of future outbreaks, and is critical to development of effective public health strategies. 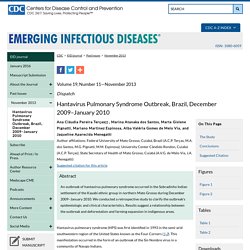 Hantavirus pulmonary syndrome (HPS) was first identified in 1993 in the semi-arid southwestern region of the United States known as the Four Corners (1,2). HPS is associated with American wild rodents of the family Cricetidae. In Brazil, areas of deforestation and environmental change, which have resulted from economic growth and agricultural production in the past 20 years, has had an effect on the number of HPS cases (8,9). Cases occurred equally in male and female patients. Acknowledgment Figures. CDC EID - Volume 20, Number 9—September 2014. Au sommaire notamment: Rio Mamore Virus and Hantavirus Pulmonary Syndrome, Brazil.

Suggested citation for this article To the Editor: Hantavirus pulmonary syndrome (HPS) is an acute, severe, frequently fatal disease associated with cardiopulmonary failure; it is caused by hantaviruses naturally hosted by wild rodents. 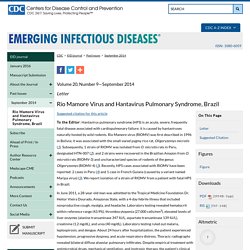 Rio Mamore virus (RIOMV) was first described in 1996 in Bolivia; it was associated with the small-eared pygmy rice rat, Oligoryzomys microtis (1). Subsequently, 1 strain of RIOMV was isolated from O. microtis rats in Peru, designated HTN-007 (2); and 2 strains were recovered in the Brazilian Amazon from O. microtis rats (RIOMV-3) and uncharacterized species of rodents of the genus Oligoryzomys (RIOMV-4) (3). Recently, HPS cases associated with RIOMV have been reported: 2 cases in Peru (4) and 1 case in French Guiana (caused by a variant named Maripa virus) (5). We report isolation of a strain of RIOMV from a patient with fatal HPS in Brazil. 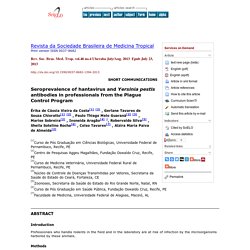 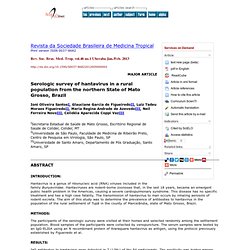 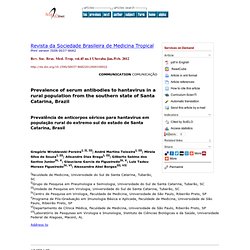 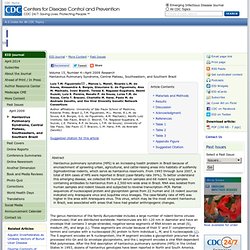