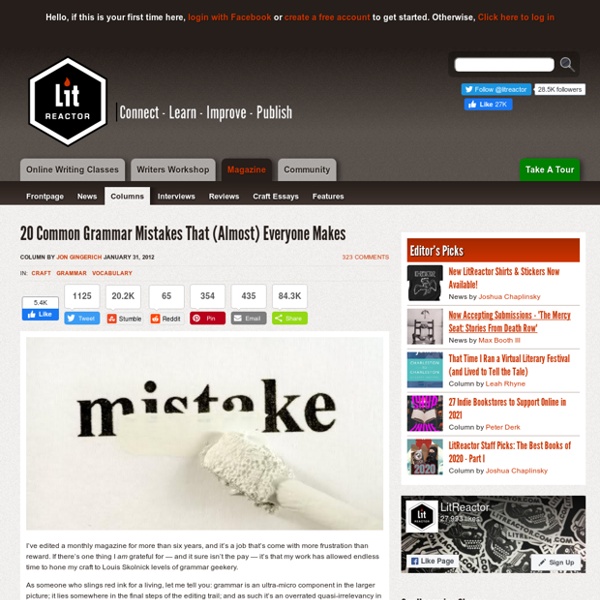 I’ve edited a monthly magazine for more than six years, and it’s a job that’s come with more frustration than reward. If there’s one thing I am grateful for — and it sure isn’t the pay — it’s that my work has allowed endless time to hone my craft to Louis Skolnick levels of grammar geekery. As someone who slings red ink for a living, let me tell you: grammar is an ultra-micro component in the larger picture; it lies somewhere in the final steps of the editing trail; and as such it’s an overrated quasi-irrelevancy in the creative process, perpetuated into importance primarily by bitter nerds who accumulate tweed jackets and crippling inferiority complexes. But experience has also taught me that readers, for better or worse, will approach your work with a jaundiced eye and an itch to judge. While your grammar shouldn’t be a reflection of your creative powers or writing abilities, let’s face it — it usually is. Who and Whom This one opens a big can of worms. Which and That Lay and Lie Moot Nor

25 Terrific Online Games for English Language Learners - Online College Courses English language learners fall into two categories — native speakers and those pursuing it via ESL/EFL instruction (or self-instruction!). But both demographics can build up their skills, no matter their age or proficiency, through game-based learning. The Internet, in its infinite providence, does not disappoint when it comes to hosting effective resources for teaching and reviewing the core components of the English language. Here’s a few particularly useful games or, more accurately in most cases, suites of games. Expressions & Sayings Index If you prefer to go directly to the meaning and origin of a specific expression, click on its relevant entry in the alphabetical list below. Use this alphabet to speed up your search: A B C D E F G H I J K L M N O P Q R S T U V W X Y Z

100 Most Often Mispronounced Words and Phrases in English There are spelling rules in English, even if they are difficult to understand, so pronouncing a word correctly usually does help you spell it correctly. Here are the 100 most often mispronounced English words ("mispronunciation" among them). Several common errors are the result of rapid speech, so take your time speaking, correctly enunciating each word. Careful speech and avid reading are the best guides to correct spelling. Need more help with these common errors? Check out the YourDictionary Battle of the Commonly Misspelled or Misused Words infographic for an easy-to-understand visual explanation of the most commonly confused words. Writing The Perfect Scene Having trouble making the scenes in your novel work their magic? In this article, I’ll show you how to write the “perfect” scene. Maybe you think it’s impossible to write the perfect scene.

How to Plot and Write a Novel: Plan Your Novel Writing with the Snowflake Method Many novelists mull over story ideas, letting them ripen and develop over time. When the story is ready to be told, instead of just sitting down and starting to type, try the Snowflake Method. This step-by-step way to write a novel begins with essential elements and becomes more detailed with each step.

Expressions for Agreeing and Disagreeing This page is about words and phrases that we use when we agree or disagree with someone in English. Stating an opinion In my opinion...The way I see it...If you want my honest opinion....According to Lisa...As far as I'm concerned...If you ask me... Asking for an opinon What's your idea?What are your thoughts on all of this?

Recently published titles 82nd & Fifth The Metropolitan Museum of Art (2013) "Abraham Lincoln: The Man (Standing Lincoln): A Bronze Statuette by Augustus Saint-Gaudens": Metropolitan Museum Journal, v. 48 (2013) Tolles, Thayer (2013) Afghanistan: Forging Civilizations along the Silk Road Aruz, Joan, and Elizabetta Valtz Fino (2012) Fluent LandTop 9 Tips to Self Study English Effectively It’s time to ask yourself: How confident are you? Your answer should be: Totally confident. And if this is true, you know you can definitely learn English by yourself, right? That’s great!

Tension Hook Your Readers With Tension By Laura Backes, Write4Kids.com Tension. Without it, life would be—let's face it—boring. So would fiction. Tension works with conflict to raise the emotional level of the text to a boiling point. It forces the reader to become invested in the story. 25 Things You Should Know About Word Choice - StumbleUpon 1. A Series Of Word Choices Here’s why this matters: because both writing and storytelling comprise, at the most basic level, a series of word choices. Words are the building blocks of what we do. They are the atoms of our elements. happy English is a West Germanic language that was first spoken in early medieval England and is now a global lingua franca. Named after the Angles, one of the Germanic tribes that migrated to the area of Britain that would later take their name, England, both names ultimately deriving from the Anglia peninsula in the Baltic Sea. It is closely related to the Frisian languages, but its vocabulary has been significantly influenced by other Germanic languages, particularly Norse (a North Germanic language), as well as by Latin and French.[6] English has developed over the course of more than 1,400 years. The earliest forms of English, a set of Anglo-Frisian dialects brought to Great Britain by Anglo-Saxon settlers in the 5th century, are called Old English.

Valoel and harshrrao...I'm happy these grammar tips helped you. They sure helped me! by larryberezin Feb 13