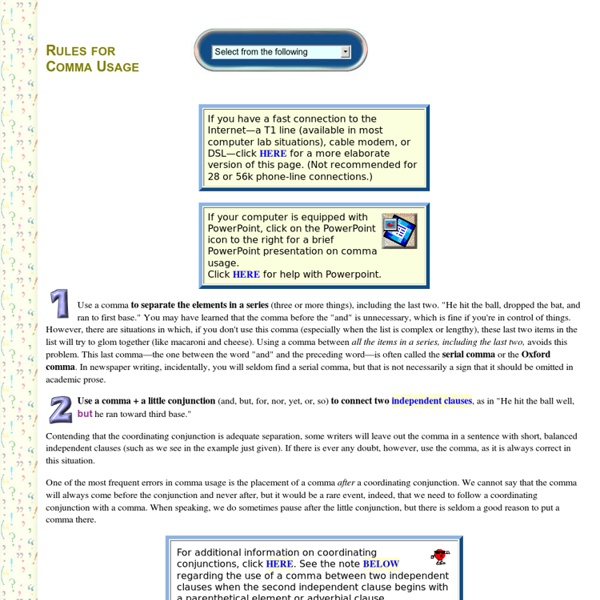 Use a comma to separate the elements in a series (three or more things), including the last two. "He hit the ball, dropped the bat, and ran to first base." You may have learned that the comma before the "and" is unnecessary, which is fine if you're in control of things. However, there are situations in which, if you don't use this comma (especially when the list is complex or lengthy), these last two items in the list will try to glom together (like macaroni and cheese). Use a comma + a little conjunction (and, but, for, nor, yet, or, so) to connect two independent clauses, as in "He hit the ball well, but he ran toward third base." Contending that the coordinating conjunction is adequate separation, some writers will leave out the comma in a sentence with short, balanced independent clauses (such as we see in the example just given). One of the most frequent errors in comma usage is the placement of a comma after a coordinating conjunction. Use a comma to set off quoted elements. Related:  labarrios

How to Punctuate Quotations in Statements To write proper English, you need to follow all the punctuation rules, even the illogical ones. Punctuation with quotations gives many people problems. Here you look at the proper punctuation for statements in quotations with and without speaker tags. Quotations with speaker tags Dumb rule 1: When the speaker tag comes first, put a comma after the speaker tag. The gang remarked, “Lola’s candidate is a sure bet.” Lola replied, “He's not my candidate.” Dumb rule 2: When the speaker tag comes last, put a comma inside the quotation marks and a period at the end of the sentence. “Lola’s candidate isn’t a sure bet now,” the gang continued. “I support a different candidate,” screamed Lola. Now you know the first two (of far too many) quotation rules. Sometimes a speaker tag lands in the middle of a sentence. “I think I’ll sue,” Betsy explained, “for emotional distress.” “You can’t imagine,” she added, “what I felt.” In each of these sample sentences, the speaker tag interrupts the quotation.

Exercises for simultaneous These exercises and more can be found in Conference Interpreting - A Students'Companion, A Gillies, 2001, (p80-83) and are reproduced with the kind permission of Tertium Krakow). More exercises can be found in the 2004 revised eidtion of this book, Conference Interpreting - A New Students' companion. VI Practice exercises for SIMULTANEOUS INTERPRETING The exercises below are designed to further skills in specific areas of interpretation technique, some may argue that in doing this we encourage inaccurate interpreting, however, I remind you that the goal here is not accuracy or fidelity but the activation that skill required to perform the exercise (that skill being one of the component parts of interpretation). Having mastered each of the component parts of interpretation we can later combine them as single package. The exercises I suggest below do not cover all of what might be held to be the component elements of the skill of simultaneous interpreting. Delivery General Knowledge WHY ?

Discourse Markers In your writing, you will want to spend some time ensuring that your work has a sense of variety. In order to do this, you might think of the following : Use conjunctions as well as/instead of sentence connectors. Use conjunctions at least some of the time. It can also be helpful to omit discourse markers if they do not serve any useful purpose. Try joining two clauses together by making one subordinate to the other. Remember, it can be tedious to read a piece of writing which has too many discourse markers. Grammar Rules and Grammar Tips 9shares Grammar Rules and Grammar Tips 11 Rules of Grammar 5 Most Common Grammatical Errors Ain't Isn't a Four Letter Word Are Base Words and Root Words the Same? Definite and Indefinite Articles English Grammar Rules for Possessive Plurals Grammar Tools for English How to Formally Write the Date Irregular Plurals Rules for Possessives Rules for Writing Numbers What Are Basic English Grammar Rules?

How to Punctuate Dialogue December 8, 2010 by Fiction Editor Beth Hill last modified April 18, 2016 The PDF Punctuation in Dialogue ($0.99) and The Magic of Fiction (available in paperback and PDF) both contain expanded and updated versions of this material. Dialogue h as its own rules for punctuation. Only what is spoken is within the quotation marks. Dialogue begins with a capitalized word, no matter where in the sentence it begins. Only direct dialogue requires quotation marks. Direct: “She was a bore,” he said.Indirect: He said [that] she was a bore. Here are some of the rules, with examples. Single line of dialogue, no dialogue tagThe entire sentence, including the period (or question mark or exclamation point) is within the quotation marks. “He loved you.” Single line with dialogue tag (attribution) following The dialogue is enclosed in quotation marks. Because the dialogue tag—she said—is part of the same sentence, it is not capped. “He loved you,” she said. She said, “He loved you.” “He loved you?” “He loved y—“

The amazing brains of the real-time interpreters One morning this summer I paid a visit to the sole United Nations agency in London. The headquarters of the International Maritime Organization (IMO) sits on the southern bank of the Thames, a short distance upstream from the Houses of Parliament. As I approached, I saw that a ship’s prow, sculpted in metal, was grafted like a nose to the ground floor of this otherwise bland building. Inside I met a dozen or so mostly female IMO translators. They were cheerful and chatty and better dressed than you might imagine for people who are often heard but rarely seen. I walked upstairs to a glass-fronted booth, where I prepared to witness something both absolutely remarkable and utterly routine. Let’s unpick what she did that morning and itemise its components. As the delegate spoke, Pinkney had to make sense of a message composed in one language while simultaneously constructing and articulating the same message in another tongue. Intriguing region Humorous pitfalls Some speakers talk too fast.

OWL Writing Exercises Welcome to the updated OWL exercise pages. For the past year and a half, we have been working on updating the OWL page design and OWL navigation based on our OWL Usability Project findings. As part of this process, we have also been working on correcting and updating our exercises. To navigate the OWL exercises, please use the navigation bar on the left. If you cannot find an exercise you have used in the past, or if you have a suggestion for adding an exercise, please let us know. Note: Users may notice that the OWL exercises no longer offer the dropdown option.