The Science Behind Foldit 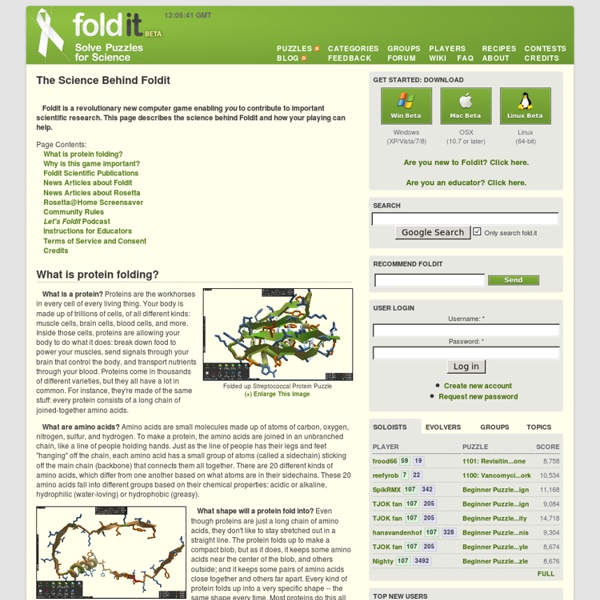 Foldit is a revolutionary new computer game enabling you to contribute to important scientific research. This page describes the science behind Foldit and how your playing can help. What is a protein? Proteins are the workhorses in every cell of every living thing. Your body is made up of trillions of cells, of all different kinds: muscle cells, brain cells, blood cells, and more. What are amino acids? What shape will a protein fold into? Why is shape important? What do proteins do? Proteins are present in all living things, even plants, bacteria, and viruses. Photosystem I is a collection of proteins in plants that captures sunlight for photosynthesis.Luciferase catalyzes the chemical reaction that makes fireflies glow.Hemagglutinin helps the influenza virus invade our cells. You can find more information on the rules of protein folding in our FAQ. What big problems is this game tackling? How does my game playing contribute to curing diseases? Firas Khatib, Seth Cooper, Michael D. Related:  medicine & health

malariacontrol.net GAME FOR SCIENCE | creo GAME FOR SCIENCE speaks to young people in a language they understand, taking its inspiration from popular MMOGs (Massively Multiplayer Online Games). Players are free to explore this world according to their own interests—health, aeronautics, genomics, international development, environment, engineering, etc.—and they can use an avatar to interact with their friends. In the thematic lands of GAME FOR SCIENCE, players encounter entertaining games, fascinating information, and engaging videos, all of them science-related. Info Target audience: 9–17 years old Partner: Canada Media Fund Technologies used: ActionScript 3.0, Flash, Smartfox Server, PHP/MySQL. Online and constantly changing: www.gameforscience.ca

FiND@Home 2,906,889 tasks After the huge crash of the database, everything is fixed and ready to go. 2,906,889 more WUs! Edit: The transitioner need to catch up 23 Feb 2015, 16:42:17 UTC · Comment Project down this weekend I stopped the BOINC server. 8,310,176 WUs New batch! I increased the predicted running time for this batch. New WUs I just put 3 192 552 more WU! Have fun :) 13 Jan 2015, 11:23:52 UTC · Comment FightMalaria@Home data now available online Hi all volunteers, We have made a results website for easy access to the data we generated using the FM@H BOINC server. We're still doing the last repeat calculations for the remaining MMV19k and other datasets, the results of which we'll add to this website. I had hoped to get the publication out prior to releasing this 'raw' data, but this is taking longer than I'd hoped. Thanks again for your generous contributions to this project.

125 Great Science Videos: From Astronomy to Physics & Psychology Astronomy & Space Travel A Brief, Wondrous Tour of Earth (From Outer Space) - Video - Recorded from August to October, 2011 at the International Space Station, this HD footage offers a brilliant tour of our planet and stunning views of the aurora borealis.A Universe from Nothing - Video - In 53 minutes, theoretical physicist Lawrence Krauss answers some big enchilada questions, including how the universe came from nothing.A Year of the Moon in 2.5 Minutes - Video - The Lunar Reconnaissance Orbiter has been orbiting the moon for over a year. The footage gets compressed into 2 slick minutes.A Day on Earth (as Seen From Space) - Video - Astronaut Don Pettit trained his camera on planet Earth, took a photo once every 15 seconds, and then created a brilliant time-lapse film.Atlantis's Final Landing at Kennedy Space Center - Video - After more than 30 years, the space shuttle era comes to a close. Physics Biology & Chemistry Environment, Geology and & Ecology Psychology & Neuroscience

Generic vs Brand Name Medicines Generic name. Each medicine has an approved name called the generic name. A group of medicines that have similar actions often have similar-sounding generic names. The brand name is usually written most clearly on any packaging. The colour, size, shape, etc, of brands of the same medicine may vary depending on which company makes it. Some tablets or pills contain a combination of medicines. Doctors are encouraged to prescribe by using the generic name. The generic name is the one doctors are trained to use. A few medicines, however, are always prescribed by the specific brand. In the UK there are strict quality controls before a product licence is granted for brand (trade) named or generic versions of medicines. Check with your pharmacist if in doubt about the use of a medicine.

The Linnean Society of London | Education Resources Welcome to our education page! We hope you enjoy exploring our activities and resources. The Linnean Society of London is the home of Carl Linnaeus in the UK. To learn more about him, his science and our collections, visit the 'Who was Linnaeus?' Teachers, parents and students can click on the other categories to view our targeted education resources, linked to the National Curriculum.

Ebola: The race for drugs and vaccines 11 February 2015Last updated at 10:44 ET Many organisations are working together to find suitable medicines The race is on to find ways to prevent and cure the Ebola virus - a disease that has killed more than 8,000 people in Sierra Leone, Guinea and Liberia. There are no proven treatments for Ebola or vaccines to prevent individuals becoming infected. However, progress is now being made on an unprecedented scale. Trials, which would normally take years and decades, are being fast-tracked on a timescale of weeks and months. Vaccines in development The aim is to use the lowest dose of vaccine possible that provides protection Vaccines train the immune systems of healthy people to fight off any future infection. Three potential immunisations are frontrunners, having been rushed from promising animal studies into human trials. And the third to enter human testing is made by Johnson and Johnson together with the company Bavarian Nordic. The real test comes next as trials start in Liberia.

Citizen Sort Nanobots Could Remove Arterial Plaque The concept of tiny robots swimming through the bloodstream has existed for decades. The idea was made famous by the 1966 film Fantastic Voyage, in which a human team is shrunk to fit into a submarine measuring one micrometer to dissolve a patient’s blood clot. Nanotechnology expert Chris Phoenix even floated the idea of replacing blood with a network of robots known as the vasculoid. They system could hypothetically replicate the function of blood while staving off infections and cancer, and eliminating vascular diseases such as atherosclerosis. Less far-fetched is a Ukrainian research project that proposes using nanobots to attack atherosclerotic plaque. A nanotechnology-based system could overcome these hurdles by making the procedure non-invasive. The technology leverages work from Eric Drexler, PhD, who came up for the word nanotechnology in the 1980s. The researchers estimate that the technology is at least a decade away from commercialization.

Marijuana On June 6, 2005, the Supreme Court ruled that the federal government has the power to prohibit and prosecute the possession and use of marijuana for medical purposes — even in the 20 states (Alaska, Arizona, California, Colorado, Connecticut, Delaware, Hawaii, Illinois, Maine, Massachusetts, Michigan, Montana, Nevada, New Hampshire, New Jersey, New Mexico, Oregon, Rhode Island, Vermont and Washington) and Washington, D.C., where it is currently legal. The decision overturned a 2003 ruling by a federal appeals court that shielded California's Compassionate Use Act, the medical-marijuana initiative adopted by the state's voters nine years ago, from federal drug enforcement. The appeals court had held that Congress lacked constitutional authority to regulate the noncommercial cultivation and use of marijuana that did not cross state lines.

The Placebo Effect A placebo (or dummy pill) is an inert substance, typically a tablet, capsule or other dose form that does not contain an active drug ingredient. For example, placebo pills or liquids may contain starch, sugar, or saline. Physical placebo, or “sham” treatments have also been used, such as inactive acupuncture devices. Placebos are often used in clinical trials as an inactive control so that researchers can better evaluate the true overall effect of the experimental drug treatment under study. Conducting a double-blind, placebo-controlled clinical trial helps to eliminate any bias that might occur due to knowledge of who receives which treatments. What is the placebo effect? Research has shown that a placebo treatment can have a positive therapeutic effect in a patient, even though the pill or treatment is not active. A nocebo effect is the opposite of the placebo effect - a negative psychological effect of a treatment with no pharmacologic activity. References 1. 2. 3. 4.

PNIRS - Home Ted Kaptchuk of Harvard Medical School studies placebos | Harvard Magazine Jan-Feb 2013 Two weeks into Ted Kaptchuk’s first randomized clinical drug trial, nearly a third of his 270 subjects complained of awful side effects. All the patients had joined the study hoping to alleviate severe arm pain: carpal tunnel, tendinitis, chronic pain in the elbow, shoulder, wrist. In one part of the study, half the subjects received pain-reducing pills; the others were offered acupuncture treatments. And in both cases, people began to call in, saying they couldn’t get out of bed. The pills were making them sluggish, the needles caused swelling and redness; some patients’ pain ballooned to nightmarish levels. “The side effects were simply amazing,” Kaptchuk explains; curiously, they were exactly what patients had been warned their treatment might produce. Although Kaptchuk, an associate professor of medicine, has spent his career studying these mysterious human reactions, he doesn’t argue that you can simply “think yourself better.” To Dr.

Nocebo - Placebo In the strictest sense, a nocebo response is where a drug-trial's subject's symptoms are worsened by the administration of an inert, sham, or dummy (simulator) treatment, called a placebo. In its original application, nocebo had a very specific meaning in the medical domains of pharmacology, and nosology, and aetiology. It was a subject-oriented adjective that was used to label the harmful, injurious, unpleasant or undesirable reactions (or responses) that a subject manifested - thus, nocebo reactions (or nocebo responses) - as a consequence of the administration of an inert, dummy drug, in cases where these responses had not been chemically generated, and were entirely due to the subject's pessimistic belief and expectation that the inert drug in question would produce harmful, injurious, unpleasant or undesirable consequences.