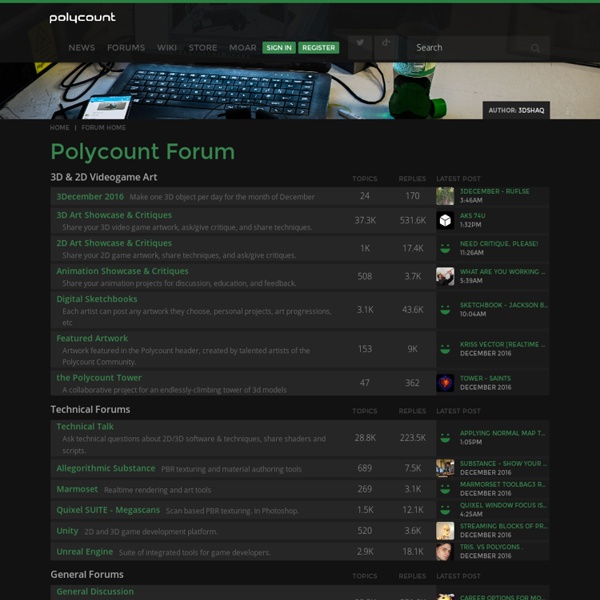 Company job boards - polycount Company job boards From polycount Jump to: navigation, search Websites that post game jobs. From the Polycount Forum thread Company job boards. Contents September 2007 Wallpaper from the Top Cows, Comic Book version of Witchblade. The series originally starred Sara Pezzini, a NYPD homicide detective who comes into possession of the Witchblade, a supernatural, artifact with immense destructive and protective powers. Through the Comicbook series Sara struggles to hone the awesome powers of the Witchblade and fend off those with a nefarious interest in it.

Orb - Crasher Update! video and brush on page 5! Hello polycounters, i recently finished working on a little game called "Crasher". We were 2 environment artists, using the Unity engine. Careers Main « Ready At Dawn The better the team the better the game. Ready At Dawn is looking for talented and passionate developers to help us push the boundaries of gameplay, art and story-telling. We are in the pre-production phase of an exciting new AAA third-person action console title, based on a brand new original IP we are creating. In addition, we are also in full production on a cutting edge VR experience, in partnership with Oculus. Our team is growing, so come join one of the preeminent independent video-game developers in the world.

Heavenly Sword Weapon, Character and Environment Concept Art By – August 14, 2007Posted in: Heavenly Sword, PlayStation 3, Screenshots, Sony About the Author Matt Litten is a 28 year old from-the-womb gamer turned video game reviewer/blogger and current editor/owner/operator of VGBlogger.com. Pirate Castle First, thanks everyone for your comments ! now i'll try to answer to questions but before i start, i must give some precisions : when i started the project i didn't intend to make an optimized map. The main purpose of this work was to make a beauty shot maps, so i hope you won't be too disappointed about the poor optimization

VFX Jobs, Animation Jobs, Video Game Jobs, TV & Film Jobs, Software Jobs - CG Job site Post production Office Recruiting 3D Generalist 57 Views0 Likes Post Production Office recruiting fulltime 3D Generalist (Shanghai)We are looking for a mid/senior level 3D Generalist to join our VFX team in Shanghai. Creature Spot - The Spot for Creature Art, Artists and Fans I did this in the spring on commission. Pretty large size for me, so it was a real challenge balancing the amount of detail and keeping a good flow moving throughout the image without creating a nightmare for myself. It was for an office environment, so I tried to keep the creatures rather humanesque and benign in nature.

Tower Wars I've been saying I was going to make a thread for this project forever now, so here it is! Tower Wars is an Indie game that myself and 8 others have been working on for the past couple years off and on. Its a game we all believe in and think will be really fun. Animation/VFX/Game Industry Job Postings › Openings "The Descendent" Los Angeles California United States