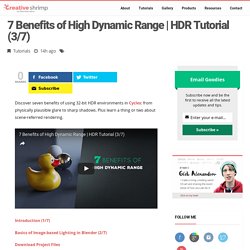 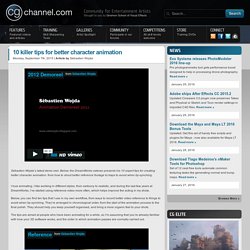 Below, the DreamWorks veteran presents his 10 expert tips for creating better character animation: from how to shoot better reference footage to traps to avoid when lip-synching. 5 Tips for Better Materials. Shading (the process of setting up materials) is an often over-looked step in the CG pipeline. 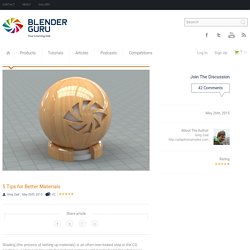 I used to just play with the material settings until it looked a bit like what I was trying to make, and then move onto texturing thinking that that was all there is to it. A wood texture slapped on a diffuse shader. Bleh. Lighting tips from the Masters. What do I know about lighting after all? 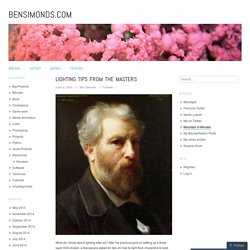 After my previous post on setting up a three layer SSS shader, a few people asked for tips on how to light their characters to best show them off. As it happens, this something I’m rather interested in, and I’ve had a blog post on the subject brewing for a while, so I’ve finally found the motivation to finally write it up. I didn’t want to spend too much time talking about specific settings for this tutorial, so instead you can download this blendfile from BlendSwap.com for some ideas on the specifics of how to set up your scene.

Lighting in portraits is key to how you want your character to be seen. The exact same character with the same pose and expression can be seen in completely different ways depending on how they are lit. Blender Lighting Tutorial - Blender Guru. Ever find yourself placing lamps randomly in the hopes your scene will look good? 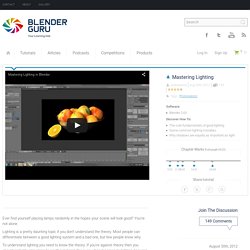 11 Useful Blender Tricks You May Not Know. Like with any other graphical applications, Blender is equipped with hotkeys and keyboard shortcuts that users can utilize for various purposes – the majority of which is to speed up access. 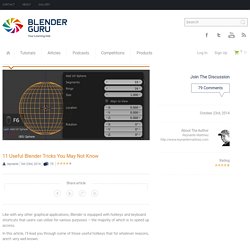 In this article, I’ll lead you through some of those useful hotkeys that for whatever reasons, aren’t very well known. #1: Hide Everything Except the Selection In complex scenes, this can be very useful as it reduces the clutter and mess when working on you’re scene so you can focus on just these objects in the meantime. Hotkey: SHIFT+H. #2: Quad View This allows you to quickly and simultaneously check your scene on all the common axes and is similar to Maya’s default view. 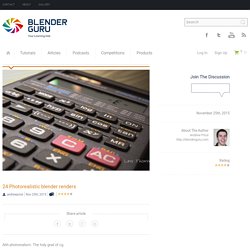 The holy grail of cg. There’s nothing better than fooling an audience into believing that what you’ve made is a photo. Especially when that audience is 3d users. Over the years we’ve seen some crazy photorealistic images made using Blender. Let’s pay a homage to the images that blew our minds… 1. Everything is a Remix Part 3. Using Toys and Forced Perspective to Get Professional, Low-Budget Visual Effects. While working on a feature film called The Grind, filmmaker Vashi Nedomansky had to come up with a way to shoot a flashback scene, complete with Humvee, in the desert of Iraq. 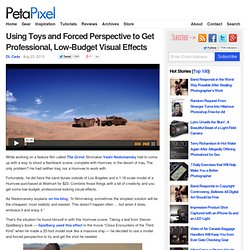 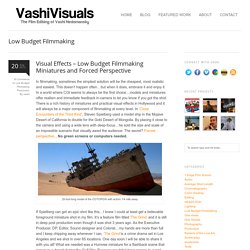 This doesn’t happen often…but when it does, embrace it and enjoy it. In a world where CGI seems to always be the first choice…models and miniatures offer realism and immediate feedback in-camera to let you know if you got the shot. There is a rich history of miniatures and practical visual effects in Hollywood and it will always be a major component of filmmaking at every level. In ‘Close Encounters of the Third Kind’, Steven Spielberg used a model ship in the Mojave Desert of California to double for the Gobi Desert of Mongolia. By placing it close to the camera and using a wide lens with deep-focus…he sold the size and scale of an impossible scenario that visually awed the audience. 20-foot long model of the COTOPOXI with actors 1/4 mile away. Understanding the 12 Principles of Animation.

August 11, 2014 4:45 am Mark Masters The 12 principles of animation are the most crucial techniques you must master as an animator. 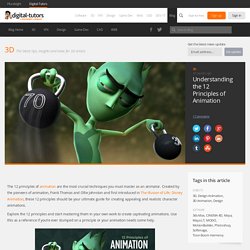