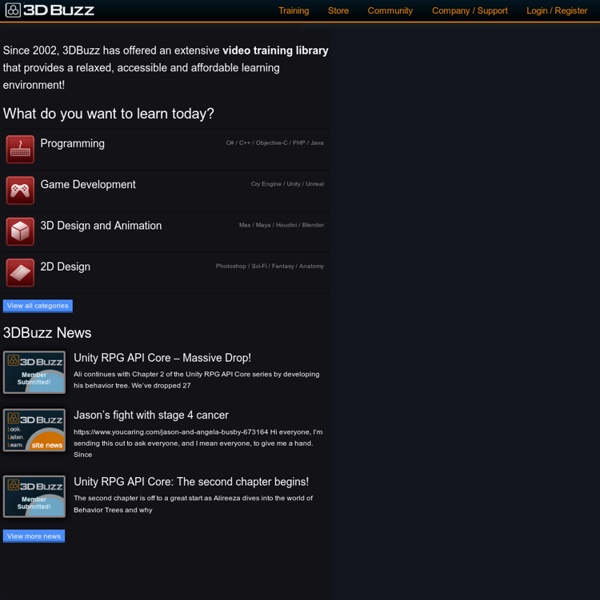 Resource for Photoshop tutorials, textures, brushes, and actions Unity 4.x Cookbook Matt Smith Matt Smith is senior lecturer in computing at the Institute of Technology Blanchardstown, Dublin, Ireland (www.itb.ie). In 1980 (you do the math) Matt started computer programming (on a ZX80) and has been programming ever since. In 1985, Matt wrote the lyrics, and was a member of the band that played (and sang, sorry about that by the way) the music on the B-side of the audio cassette carrying the computer game Confuzion (wikipedia.org/wiki/Confuzion). Matt holds a bachelor's degree in Business Computing (Huddersfield University, UK), and as that was a bit boring, he went on to get a masters in Artificial Intelligence (Aberdeen University, Scotland), and a PhD in Computational Musicology (Open University, UK). Chico Queiroz Chico Queiroz is a multimedia designer from Rio de Janeiro, Brazil. Sorry, we don't have any reviews for this title yet.

3D CAD Browser - Home Advanced Coroutines (inner workings) | Unity Gems Motivation You should read this article if you really want to know what is going on behind the scenes in coroutines. It will be very useful if you are following the FSM tutorial and you want to get the grimy details on how we can create interruptable coroutines that can be later resumed. This is an advanced subject and you don't really need to know this if you just want to use coroutines. If you are building systems and frameworks, or you are just curious then read on! If you want to know when coroutines are called and how to use them to create powerful sequences then you should read the Coroutines article, that's really got some useful tools in it too. Coroutines So a coroutine is basically an interruptable routine that can later be resumed. It's obvious that yield is a part of the C# language - so what is it really for? Code Based Enumerators A while back the designers of the CLR decided that it would be a really good idea if you could enumerate over things that were created by code.

Stop Current Coroutine, Then Restart It Trying to trigger a coroutine loop at random intervals, but before it starts, it needs to interrupt and exit the previous instance of it, so only one instance of the loop is running at a time: while (x == true){ Do_Action_Over_A_Number_Of_Frames(); yield;} Tried a bunch of different methods with no luck. I could disable and enable the script that contains the above coroutine but that seems like overkill. I feel like I'm missing something really simple but scoured the Forums and Answers with no luck. how to restart coroutine on event Okay, I got this working now with a mixture of the two: a coroutine carrying a timestamp of its own invocation and the parent class carrying a timestamp of the last invocation of its coroutine. When the function gets invoked, it will set both the class timestamp and its own timestamp to be the same. Before each action, it will check whether the two are identical, i.e. if in the meantime another one was invoked. For robustness, the timestamp doesn't store the actual time but the order of invocation.The stamp is big enough for 1000 invocations every second for about 1.5 months... Note that this specific example is bound to a parent class.

Coroutines with IEnumerable and yield return | Smellegant Code There was a brief flurry of excitement about the fancy yield return syntax when the C# 2.0 specification was first published some years ago, and the idea of it being used for creating coroutines. This quickly died down, as far as I can see anyway. Either people forgot the idea, or it became such boringly standard practice that no one ever thinks to discuss it anymore. I don’t know which, but I think it deserves more attention either way. There were a few people at the time saying that it was a shame that C# appeared to only support coroutines in a special case where the function returns some weird IEnumerable<T> thing, and wouldn’t it have been better if it was more general? But that’s a misunderstanding. Aside: A word about threads. Supposing you own the code for a lengthy algorithm, and you want to break it up into steps that can be executed one at a time, allowing you to keep interacting with the user. And I might call it like this: Here’s CoroutineOnEnumerable.cs: Like this:

Clock, a Unity C# Tutorial In this tutorial we'll write a small C# script to animate the arms of a very simple clock. You'll learn to create an object hierarchy;create a script and attach it to an object;access namespaces;use the Update method;rotate stuff based on time. You're assumed to already have a basic understanding of Unity's editor. If you've played with it for a few minutes you're good to go. Creating the clock We start by creating a new Unity project without any packages. We need an object structure to represent the clock. We'll use simple boxes to visualize the arms of the clock. Animating the clock We need a script to animate the clock. First, we indicate that we want to use stuff from the UnityEngine namespace. This gives us a minimal class that can be used to create components. To animate the arms, we need access to their Transform components first. using UnityEngine; public class ClockAnimator : MonoBehaviour { } Next, we'll add an update method to the script. Improving the clock This works! Downloads

why am i interested in cybersecurity?
You can feel good about your work knowing that you're helping protect peoples' livelihoods and privacy.
You might also find great satisfaction in a job
that requires you to be on your toes and that keeps your mind engaged. This is an important, exciting field. by thomas3221 Apr 24