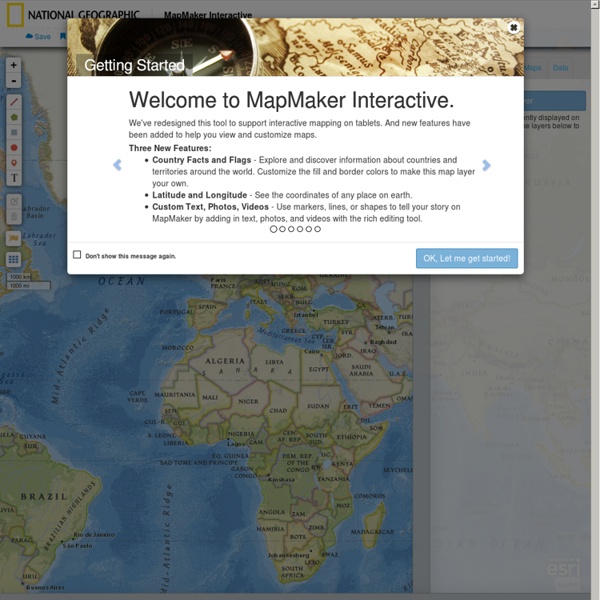 Atlas for the End of the World Précis On May 20, 1570, Abraham Ortelius, book collector and engraver from Antwerp, published the Theatrum Orbis Terrarum (Epitome of the Theater of the World), the world's first atlas… Read more Essay: Atlas for the End? Whereas Ortelius marked out modernity's territorial beginnings, this atlas — by focusing on the remaining habitat in the world's 36 biodiversity hotspots — rakes over its remains. Google Apps and sites Sites and Apps for Education Mappe Concettuali, Aggregatori di lezioni, Repository Thinglink Mindomo

Keezy Share: Description: Two child-friendly music Apple apps. A sound sampler which record sounds and play them back to make interesting ‘music’, the other is drum machine. Supply your own earplugs!Website: keezy.coSound Sampler Apple App: itunes.apple.com/gb/app/keezy/id605855595?mt=8Drummer Apple App: itunes.apple.com/gb/app/keezy-drummer/id933630069? 40 maps that explain the world By Max Fisher By Max Fisher August 12, 2013 Maps can be a remarkably powerful tool for understanding the world and how it works, but they show only what you ask them to. So when we saw a post sweeping the Web titled "40 maps they didn't teach you in school," one of which happens to be a WorldViews original, I thought we might be able to contribute our own collection. Some of these are pretty nerdy, but I think they're no less fascinating and easily understandable. A majority are original to this blog, with others from a variety of sources.

Ordnance Survey This is because your web browser needs updating. Please try again using a more current web browser or check TLS v1.1 and 1.2 are enabled in your settings. Why has this happened? Support for TLS 1.0 across the internet is being discontinued following the widespread availability of its more secure successors, TLS 1.1 and TLS 1.2, to resolve internet security issues and comply with modern standards. In order to mitigate possible security issues and conform to our own policies, Ordnance Survey has disabled the use of TLS 1.0 across our public website. TLS is used by a wide variety of everyday applications, including email, secure web browsing, instant messaging, internet telephony, etc.

How We Share the World This interactive graphic shows how the world is divided according to six different socioeconomic variables. The land area of each country represents its share of the worldwide total. Click on a circle to reshape the map For attribution and data sources, scroll to the bottom. I have been having fun experimenting with cartograms lately. As maps go, they have their shortcomings.

Europe Map with Countries, Map of Europe, European Countries Map Europe HistoryEurope was first inspired by the Classical Greek culture of the 8th-century B.C.It had a powerful influence on the Roman Empire that spread to Northern and Mediterranean Europe. The Romans had a profound impact on the growth of rich culture and architecture. After the collapse of Roman Empire in the west, Byzantine Empire emerged and survived (285-1450) in the east. Loopy Makes It Easy to Create Animated Simulations Loopy is a free tool for creating your own animated simulations or illustrations of a concept. This free animation tool is designed to showing relationships between two or more parts of a system. It's perfect for showing cause and effect or for showing a workflow system.

TerraClues TerraClues is the ultimate Google Maps scavenger hunt game! Follow clues to find hidden locations on the map Create your own hunts for others to play A fun game that makes you think! Add your own unique clues. Take people on a hunt around the world. Test your friends knowledge with world trivia. Order your own t-shirts, coffee mugs, and other TerraCritter items to show off to your friends or get a unique fun gift for the TerraClues fan.