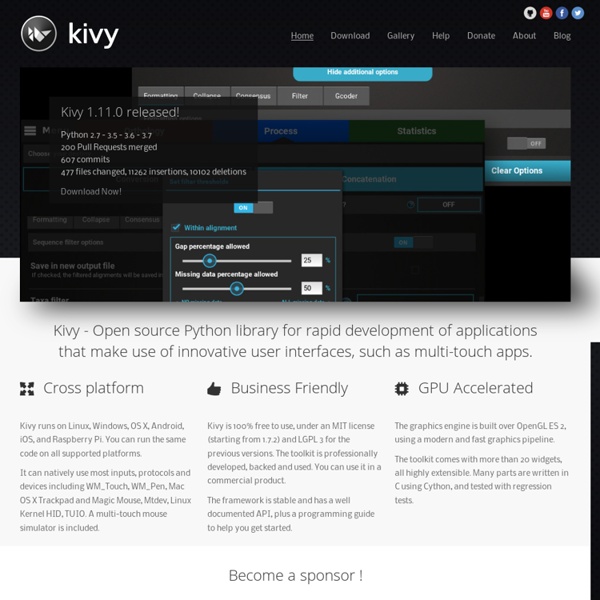 High quality patterns for your next web project Nothing like a field of beautiful flowers. Download Download These lovely water-colorful dots will make your designs pop. Download TkInter Tkinter is Python's de-facto standard GUI (Graphical User Interface) package. It is a thin object-oriented layer on top of Tcl/Tk. Tkinter is not the only GuiProgramming toolkit for Python. It is however the most commonly used one. CameronLaird calls the yearly decision to keep TkInter "one of the minor traditions of the Python world." The Tkinter wiki: Let's build a simple Android app, part 2 In the last exciting installment of “Let’s Build a Simple Android App”… We went through the process of creating a basic app that asked a question and let you give a response. It was cooler than it sounds – it had a nice color palette and everything. In part 2, we’ll be building on that starting point and adding some more advanced functionality.

Anti-Patterns in Python Programming - Constantine Lignos This page is a collection of the most unfortunate but occasionally subtle issues I've seen in code written by students new to writing Python. It's written to help students get past the phase of writing ugly Python code and understand some of the most common idioms. The simplifications employed (for example, ignoring generators and the power of itertools when talking about iteration) reflect its intended audience. There are always reasons to use some of these anti-patterns, which I've tried to give those where possible, but in general using these anti-patterns makes for less readable, more buggy, and less Pythonic code. If you're looking for broader introductory materials for Python, I highly recommend The Python Tutorial or Dive into Python. If you have comments or wish to use this work in way other than what the license allows, feel free to get in touch with me by e-mail.

Slicebox - A fresh 3D image slider with graceful fallback Slicebox is a jQuery 3D image slider plugin that makes use of CSS 3D Transforms and provides a graceful fallback for older browsers that don't support the new properties. View demo Download source With the CSS 3D Transforms we can create some neat effects by transforming elements in three-dimensional space. Slicebox makes use of the 3D transforms properties and allows different kind of effects. The main idea is to create three-dimensional image slices that will rotate and reveal the next image as another side of the 3D object.

GuiProgramming Python has a huge number of GUI frameworks (or toolkits) available for it, from TkInter (traditionally bundled with Python, using Tk) to a number of other cross-platform solutions, as well as bindings to platform-specific (also known as "native") technologies. Cross-Browser Frameworks Cross-Platform Frameworks The major cross-platform technologies upon which Python frameworks are based include Gtk, Qt, Tk and wxWidgets, although many other technologies provide actively maintained Python bindings. Platform-specific Frameworks GUI Design Tools and IDEs

OpenFace Free and open source face recognition with deep neural networks. 2016-01-19: OpenFace 0.2.0 released! See this blog post for more details. OpenFace is a Python and Torch implementation of face recognition with deep neural networks and is based on the CVPR 2015 paper FaceNet: A Unified Embedding for Face Recognition and Clustering by Florian Schroff, Dmitry Kalenichenko, and James Philbin at Google.

Why Every Language Needs Its Underscore - Hackflow (This is an adaptation of a talk I gave at PyCon and DevDay. Slides and video are available in russian) Do you know what underscore is? Goodbye, Object Oriented Programming – Charles Scalfani I’ve been programming in Object Oriented languages for decades. The first OO language I used was C++ and then Smalltalk and finally .NET and Java. I was gung-ho to leverage the benefits of Inheritance, Encapsulation, and Polymorphism. Using Python in TideSDK - TideSDK Documentation Author: David Pratt Preface This documentation applies to TideSDK 1.3.1. MINICRAFT 3D canvas raymarching demoscene 256b HTML5 minecraft raycasting notch Tribute to MINECRAFT, voxel flyby in 252 bytes of HTML5. Motivation About one year ago Notch wrote a Minecraft flyby in JavaScript in 4kb with procedural textures, camera, fog, ... It was really cool and fast. The code was mostly optimized for speed, so surely with some efforts it could fit in 2 or maybe even 1kb.