Squares around the world 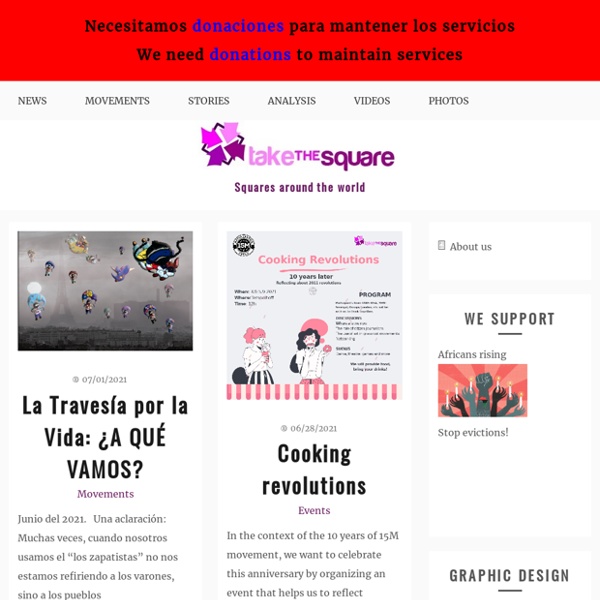 The people of Aysén strongly demonstrated again in the streets on Thursday after the government made conditional the dialogue to restore public order in the area. The people of the region, which since… www.european-resistance.org Come all you good workers, Good news to you I’ll tell Of how the good old union Has come in here to dwell. Which side are you on? Which side are you on?

Occupy Europe: How a generation went from indifferent to indignant The most significant current youth movement in Europe started with a tweet on Justin Bieber, the boyish Canadian crooner. On May 15, following a rally against education cuts at Madrid's main square, a cluster of 40 students stayed on, talking into the night. Spain, like Greece and Italy, faces huge public deficits. The government has been cutting outlays for basic services like schools, health care, and social welfare. While college attendance in Spain is a success story, youth unemployment has risen to a horrific 44 percent.

2012 international road to dignity Road subject to changes. Camino sujeto a cambios. About these ads Decentralize the web with Diaspora We're fully funded! Check out some of the other great projects on Kickstarter Diaspora - the privacy aware, personally controlled, do-it-all distributed open source social network We are four talented young programmers from NYU’s Courant Institute trying to raise money so we can spend the summer building Diaspora; an open source personal web server that will put individuals in control of their data. What is it? Globalizing Dissent, From Tahrir Square to Liberty Plaza The winds of change are blowing across the globe. What triggers such change, and when it will strike, is something that no one can predict. Last Jan. 18, a courageous young woman in Egypt took a dangerous step.

Welcome In July we launched Lively in Google Labs because we wanted users to be able to interact with their friends and express themselves online in new ways. Google has always been supportive of this kind of experimentation because we believe it's the best way to create groundbreaking products that make a difference to people's lives. But we've also always accepted that when you take these kinds of risks not every bet is going to pay off. That's why, despite all the virtual high fives and creative rooms everyone has enjoyed in the last four and a half months, we've decided to shut Lively down at the end of the year.

Occupy protests around the world: full list visualised "951 cities in 82 countries" has become the standard definition of the scale of the Occupy protests around the world this weekend, following on from the Occupy Wall Street and Madrid demonstrations that have shaped public debate in the past month. We wanted to list exactly where protests have taken place as part of the Occupy movement - and see exactly what is happening where around the globe. With your help, adding events in our form below, we've been able to show 750 Occupy events world wide. As we wrote this week:

[International Network for Peace] With the tech landscape taking shape in this century, there is an urgent need to invest in a wide array of devices. Most of the technically savvy minds often invest in gadgets that include laptops, smart phones and desktops among others. The advantage with these gadgets is that they get you going; however, the flipside is that they may make you get confused.

Occupy Wall Street: The Most Important Thing in the World Now Published in The Nation. I was honored to be invited to speak at Occupy Wall Street on Thursday night. Since amplification is (disgracefully) banned, and everything I said had to be repeated by hundreds of people so others could hear (a.k.a. “the human microphone”), what I actually said at Liberty Plaza had to be very short. With that in mind, here is the longer, uncut version of the speech. Springpad Works Like Pinterest, But Smarter Smart notebook Springpad is morphing into a smart Pinterest. The app is launching a redesign Wednesday that lets users make notebooks public, follow other users' public notebooks and "spring" specific items to their own notebooks. Since launching about three years ago, Springpad has registered 3 million users for its list-enhancing service. It uses more than 150 services' APIs to automatically add actionable information to lists. In a list of movies, for instance, it might add movie showtimes, reviews and DVD release dates.

What do we want again? Occupy Wall St takes hold of Australia "Tens of thousands" expected soon "It's not radicals - just ordinary people" Australians prepare own occupations IT'S the protest movement that may not exactly know what it's protesting about - and may not have much chance of achieving it. Demontrators enraged by "corporate greed" plan to spread their message in capital cities across Australia tomorrow as part of the Occupy Wall Street movement.