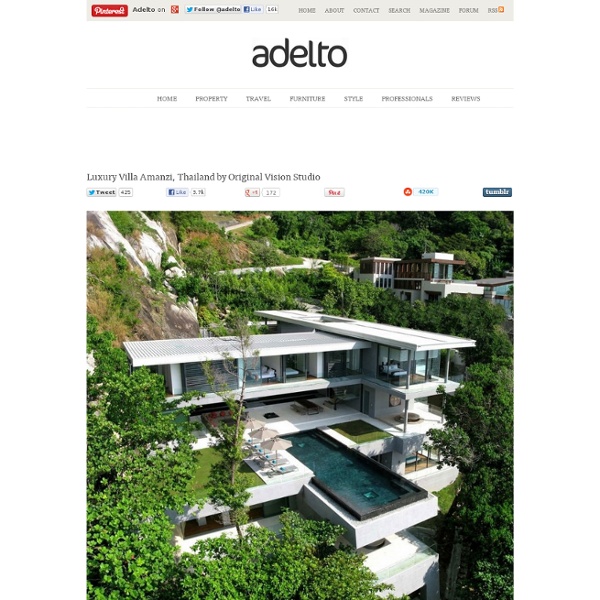 Luxury Villa Amanzi, Thailand by Original Vision Studio The Villa Amanzi by Architect firm Original Vision Studio is a stunning modern vacation residence located in the exclusive Cape Sol on the West coast of Phuket, Thailand. Villa Amanzi is a stunning six bedroom residence with a 15m infinity pool and breathtaking views over the Andaman Sea. This luxury villa enjoys a spectacular headland location along Kamala’s exclusive Millionaires Mile and captures cool gentle breezes all year round with uninterrupted sea views from every vantage point, in one of the most breathtaking locations Phuket has to offer. The contemporary design features ultra modern architecture and interiors that combine to provide guests with the optimal environment to relax and unwind in unspoilt luxury. Photograpghy by Marc Gerritsen & Helicam Asia Aerial Photography About Richard Barker Love Interior Design & Exotic Travel? May 19, 2011 | Phuket Thailand Travel | View comments

Gothic Architecture Pictures All text and pictures © QT Luong. See conditions for use of pictures. There are 28 pictures on this page out of 228 pictures of Gothic Architecture. Flavonoid Molecular structure of the flavone backbone (2-phenyl-1,4-benzopyrone) Isoflavan structure Neoflavonoids structure Flavonoids (or bioflavonoids) (from the Latin word flavus meaning yellow, their colour in nature) are a class of plant secondary metabolites. My, Phantasy Star Online 2, Don't You Look Nice Phantasy Star Online is actually closer to Diablo than anything else. Phantasy Star Universe is much more like Guild Wars. But I suppose it's worth noting that there are some similarities between the formulae for them - both are not MMOs, as they only ever allow a small number of people to play together at a time, and Guild Wars/PSU only allow large groups of players to assemble in visual chat lobbies that also have mundane shops in them, for supplies and whatnot (whereas in PSO and Diablo, you have to use a portal and return to town to do that). Oh how I wish though, that Sega and Sonic Team were smart enough to approach the game with more of a Borderlands model: Sell us a base game, of which we can access all of its content from the get-go, and then sell us $10 DLC packs periodically that add new areas and story missions and whatnot.

Indoor Swings: Hours Of Fun And Therapy Have you seen these fun Indoor Swings? I don’t know about you, but I would love to put one in my home? They would make for hours of fun and therapy! Why not bring the outside into your home? Marlins Park in Miami, Baseball’s Newest Stadium Lumbering and dizzyingly white in the Florida sun, the new Marlins Park is an elliptical concrete, steel and glass boulder looming above the low-rise houses and empty lots of the Little Havana neighborhood. With retail on the outside and a public plaza in front, it’s designed partly to gin up some street life. Economic development is supposed to follow — that was the rationale for the public financing that covered most of the $634 million project ($515 million for the park itself) and contributed to the recall of Miami-Dade County’s mayor. Cities are always building new stadiums with the justification that they’ll catalyze the local economy. They rarely do.

Spectacular Architecture in Spain [17 HDR Photos] Plaza Zorrilla, Valladolid (Spain)Spectacular architecture HDR photo: marcp_dmoz Some photographers like Marc love to take photos and then process them to generate HDR (high dynamic range) images. He’s from Spain and has an amazing eye and talent for capturing architecture. Here are 17 gorgeous examples that Marc took in the last year to help us take a virtual tour of Spain and admire the architectural beauty that can be found there. [17 Pictures] Hint: Use “J” and “K” keys to navigate from picture to picture. Pharmos Sells Cannabinoid Program to Reperio To Our Faithful Current.com Users: Current's run has ended after eight exciting years on air and online. The Current TV staff has appreciated your interest, support, participation and unflagging loyalty over the years. Your contributions helped make Current.com a vibrant place for discussing thousands of interesting stories, and your continued viewership motivated us to keep innovating and find new ways to reflect the voice of the people. We now welcome the on-air and digital presence of Al Jazeera America, a new news network committed to reporting on and investigating real stories affecting the lives of everyday Americans in every corner of the country.

Traditional Turf Houses In Iceland In Iceland The Icelandic turf house was the product of a difficult climate, offering superior insulation compared to buildings solely made of wood or stone, and the relative difficulty in obtaining other construction materials in sufficient quantities. Due to the lack of transport and Iceland’s remoteness, importing foreign timber was not very common and mostly reserved for ship and church building. However, Iceland did have a large amount of turf that was suitable for construction. photo source The turf houses are made of flat stones, and upon this was built a wooden frame which holds the load of turf.

Four Story Townhouse With Very Cosy Interior Design – 5th Street by TBHC The renovation of this 4 story townhouse in center Park Slope is one of the first projects by The Brooklyn Home Company. It’s a great example how cool could be combination of vintage and modern elements in the one interior. The main color theme in this interior is a combination of white and natural wood of different hues. It works very well and everything looks very cosy and livable. The home is flooded with natural light through double hung windows.

Overlooked Feminist Architect Gets Her Due It was a cold January day in 2011 when I had last seen the Hotel Lafayette, the grand French Renaissance Revival styled brick that sits on the corner of Washington and Clinton Streets in downtown Buffalo, New York’s Lafayette Square. Built between 1901 and 1904, it was originally designed by Louise Blanchard Bethune (1856-1913), lead architect on the project with her firm Bethune, Bethune & Fuchs, which included her husband Robert Bethune and former apprentice William L. Fuchs. Louise Bethune carries the mantle of being the first woman in the United States to be recognized as a professional architect, with her inclusion in the Western Association of Architects in 1885, and then in 1888, when she became the first woman member of the American Institute of Architects (AIA) and then the first to become a Fellow, (FAIA), in 1889. Since Spring, 2010, the seven story dark red brick building with its distinctive white glazed terra cotta decorative trim had been closed for business.