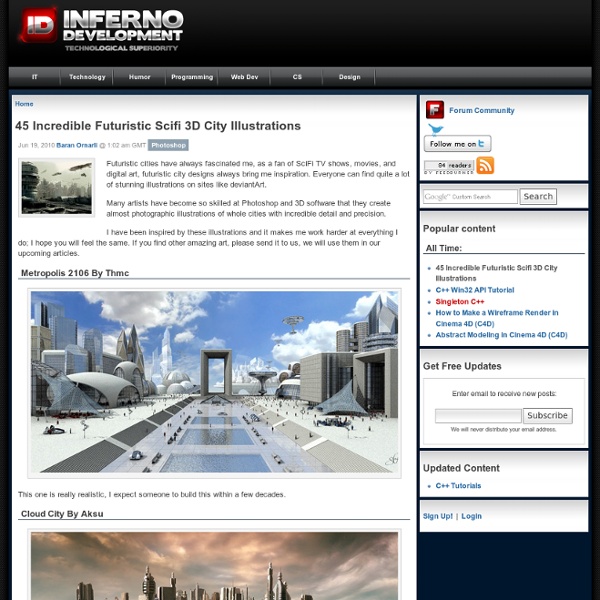 Futuristic cities have always fascinated me, as a fan of SciFi TV shows, movies, and digital art, futuristic city designs always bring me inspiration. Everyone can find quite a lot of stunning illustrations on sites like deviantArt. Many artists have become so skilled at Photoshop and 3D software that they create almost photographic illustrations of whole cities with incredible detail and precision. I have been inspired by these illustrations and it makes me work harder at everything I do; I hope you will feel the same. Metropolis 2106 by thmc This one is really realistic, I expect someone to build this within a few decades. Cloud City by aksu I've always wanted to live in a city like that. Atmosphere Emitters by sittingducky This one has an eerie feel to it, makes me think of a futuristic civilization that Steven Hawkins described in his documentary show. Star Wars 1 by JJasso This one was created for the Star Wars The Old Republic cinematic. Phoenix Rising by tigaer 3001 by sanfranguy

I Have a Dream' - Martin Luther King Jr. (audio only) I am happy to join with you today in what will go down in history as the greatest demonstration for freedom in the history of our nation. Five score years ago, a great American, in whose symbolic shadow we stand today, signed the Emancipation Proclamation. This momentous decree came as a great beacon light of hope to millions of Negro slaves who had been seared in the flames of withering injustice. serious | information visualized Click here to see original size on flickr Authors: Creative Direction: Donato Ricci, Concept development: Gaia Scagnetti, Visualizer: Mario Porpora, Artist: Michele Graffieti, Designer: Luca Masud

A Timeline of Timelines This is an expanded version of a timeline tha­t appeared in Cabinet's "Histories of the Future" issue. Daniel Rosenberg's introduction to the timeline can be found here. Although we have not been able to preserve the horizontal design, we have added additio­nal entries for this web version. If there are omissions or errors, we'd love to hear from you. Please email Cabinet at this e-mail address. Jewish scholar José ben Halafta calculates the exact length of time between Creation and the destruction of the Second Temple. ca. 325 In his Chronicle, Eusebius of Caesarea innovates a tabular system to coordinate events drawn from several distinct historiographic traditions. ca. 415 Augustine’s allegorical interpretation of the biblical chronology forms a framework for interpreting human history according to the “six ages of man.” Scythian monk Dionysius Exiguus introduces the convention of dating events anno Domini. ca. 530 Rule of St. 10th CENTURY 12th CENTURY 12–13th CENTURY 13th CENTURY ca. 1500 H.

16 Infographic Resumes, A Visual Trend (It’s actually up to 18 now.) A number of designers have attempted to design a visual, infographic resume, and while this is certainly not mainstream (yet), it is gaining some momentum. I wanted to highlight some of the great examples available on the web, but the line between an infographic resume and a designer resume is tough not to cross. I’ve tried to stay true to only infographic versions here, and didn’t include many good illustrated resumes that didn’t include any visualizations. Michael Anderson’s 2008 concept on an infographic resume (above) is probably the most well known. I decided to update my résumé with a different perspective on the typical time-line theme. I do agree it’s more of an overview and less of a project-experience-oriented resume, but I’ve been thinking a lot about (and looking at) resumes lately, and I feel like what you really need to do is grasp someone’s attention first. I am currently in the process of remaking my portfolio. Which ones do you like? Randy

Dream Worlds Revealed On Canvas Along with some magnificent dreams, Jacek Yerka finds inspiration for his masterful paintings from his childhood memories: the places, remembered feelings and smells of 1950′s Poland. He studied fine art and graphic design before becoming a full time artist in 1980… and we’re glad he did. His paintings will take you through incredible worlds of imagination, bending reality in captivating and clever ways fit to inspire a novel or film. See many more examples of his find paintings at yerkaland.com. See Also ENDEARING MONSTER DRAWINGS POP FROM THE SCREEN Via: hypeness.com.br

Amazing Droste Effect Photos that will Twist Your Mind Nov 09, 2010 / Category : Photography / 1 Comment The technical term for this illusion is the "Droste effect" named after a 1904 package of Droste brand cocoa. A picture exhibiting the Droste effect depicts a smaller version of itself in a place where a similar picture would realistically be expected to appear. This smaller version then depicts an even smaller version of itself in the same place, and then goes on and on... A perfect example of the Droste effect can be simply produced by placing two mirrors in front of each other. Another technique would be to shoot one's own television with a video camera, while showing the output of the video camera on the same television.

Amazing Illustrations Art By Chinese Artist An amazing illustration art is a displayed visualization form presented as a drawing, painting, photograph or other work of art that is created to elucidate or dictate sensual information (such as a story, poem or newspaper article) by providing a visual representation graphically. Peony Yip, also known as The White Deer, is an illustrator from Hong-Kong, China. Her artwork encompasses a lot of women portraits, animals drawings, and sometimes both of them in one. Peony’s art reflects sensuality and femininity.Today, there is a growing interest in collecting and admiring original artwork that was used as illustrations. here we showcase amazing illustrations by Chinese artist you see this post and comments about this post.

ArcelorMittal Orbit Orbit was designed by Turner-Prize winning artist Sir Anish Kapoor and Cecil Balmond of engineering Group Arup. Announced on 31 March 2010, it was expected to be completed by December 2011. The project came about after Mayor of London Boris Johnson and Olympics Minister Tessa Jowell decided in 2008 that the Olympic Park needed "something extra". Designers were asked for ideas for an "Olympic tower" at least 100 metres (330 ft) high, and Orbit was the unanimous choice from proposals considered by a nine-person advisory panel. The project was expected to cost £19.1 million, with £16 million coming from Britain's richest man, the steel tycoon Lakshmi Mittal, Chairman of the ArcelorMittal steel company, and the balance of £3.1 million coming from the London Development Agency. The ArcelorMittal Orbit closed after the 2012 Olympic and Paralympic Games, while the South Plaza area of the Park (in which Orbit is positioned) underwent reconstruction. History[edit] Design[edit] Interpretation[edit]

Lessons Drawspace Pro Lessons are designed for artists of all levels and educators, and are logically organized into resources and activities. Eventually, all lessons and E-books authored by Brenda Hoddinott will be available here: four to eight brand new lessons and newly-revised older lessons are being added every month! Upgrade Now: Download all 246 lessons and 4 e-books! Try for Free: Download lessons marked as "Free"! Free 1.1.R1 Glossary Of Art Terms Definitions of art-related terms used in the resources and activities of Drawspace Curriculum (updated February 2013) Download 1.1.R2 Travelling Back in Time with Graphite A few fun tidbits of information about the history of graphite $1.49or Upgradeto access all files 1.1.R3 Examining Graphite and Grades Understanding the differences between H and B grades of graphite $0.99or Upgradeto access all files 1.1.R4 Seeing Grades in Drawings Graphite drawings demonstrate the visual qualities of H and B grades of pencils $1.49or Upgradeto access all files

Retro Futurism Retro Futurism Frank R. Paul was an illustrator of US pulp magazines in the science fiction field. He was born in Vienna, Austria… Frank R. Paul was influential in defining what both cover art and interior illustrations in the nascent science fiction pulps of the 1920s looked like. Many many years ago (~1940), Frank R. 7th of July 2010 Probably Related Retro Futuristic Illustrations by Klaus Bürgle Tavis Coburn’s Amazing Retro Program Covers #7 by disonyando Retro Style Recovery Kits Travel Status Back home since 54 days Currently in: Switzerland Oh dear, do you realise how old your browser is?