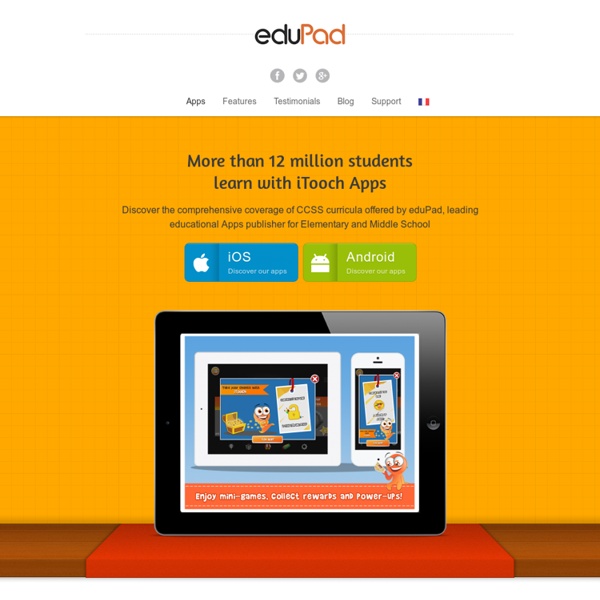 Tablets and Smartphones are changing the way we learn. They are intuitive and ubiquitous and they blur barriers between school and home, work and personal life, play and study. Features Loaded with thousands of questions, apps cover official educational curricula & comply with Common Core State Standards. This app creates great game dynamics and incentives so that the user always wants to progress further in the application. Apps embed a blackboard and a calculator for students to write and calculate directly on the screen without having to leave the app.

Apple TV in the Classroom « PeorBust For the last 6 months I have been trialling the use of an iPad in school. I have tried as much as possible to do everything on the iPad from producing presentations, editing and uploading movies, emailing and browsing, video analysis, score keeping and even my registers. But the biggest change to my teaching was the introduction of an ATV unit into my classroom. This little black box took no time to install and hooked into the school network easily. Virtually straight away I was mirroring my iPad screen through the projector onto the white board and with no cables in sight!

New UN iPhone Application Highlights Role of Ecosystems in Tackling Climate Change Abu Dhabi (United Arab Emirates) / Nairobi, 13 December 2011 - How many mangroves does it take to offset a transatlantic flight? What consumer actions can we take to reduce damage to rainforests? Answers to these questions and many more are provided by a new iPhone application launched by the United Nations Environment Programme (UNEP) at the Eye on Earth summit in Abu Dhabi today. The UNEP application draws attention to the critical role played by ecosystems such as salt marshes, mangroves, tropical forests and seagrasses in tackling climate change. Users of the application can calculate their personal carbon footprint for journeys taken by air, train or road. They will then be shown the equivalent area of a particular ecosystem (such as a tropical forest) that can store this amount of carbon dioxide.

iPhone and iPod apps for Schools I recently decided to investigate other apps that might be useful for teachers and schools. As well as finding some wonderful new applications, I also found lots of really useful iPhone+education related sites: World Maths Day 2010 has a dedicated application which you can use to practise your Maths skills. iPhone for Kids is a wonderful blog which shares ideas and advice for ‘iParents’… those parents who want to give children opportunities to use their iPhones. It shares useful applications and offers advice, much of which will also be helpful for teachers.There are lots of language applications which would be useful for MFL classes. eduTecher – A wonderful tool which lets teachers find (and share) useful resources and web tools that can be used in the classroom.Many schools are now developing their own applications for teachers, parents and pupils to use.

Visually Beautiful Recipe Curation Site Gojee Adds Drinks To The Mix Foodie favorite Gojee, which curates recipes from food bloggers around the web in a visually beautiful way, is branching out today to beverages, and will offer drink recipes (including both alcoholic and non-alcoholic drinks). As we wrote in our earlier review of the site, Gojee lets you search for recipes by ingredient, either via ‘cravings’ or by one ingredient you have in your pantry. You can also input your dislikes or allergies and Gojee will make sure to surface recipes without these ingredients. If you has leftover beets in your pantry, you that query and Gojee will show youa ll the recipes that include that ingredient from the many food blogs it curates data from. The site presents a beautiful image of the food along with a list of what else is included in the dish, a short description of the dish, and a link to the full recipe on the food blog. You can also star the recipe to save it to your favorites.

iPad - tablette - ce que ça fait et fait pas/Dos and don'ts The following User Guides and Resource Links are provided to support staff using a University iPad. This information may be useful for personally owned iPads or other Apple devices running iOS software (eg. iPod Touch, iPhone) but is provided as a guide only. Students and staff are responsible for the backup of data on their personal devices.

Autodesk Ecotect Sustainable Building Design Software Effective March 20, 2015, new licenses to Autodesk® Ecotect® Analysis software will no longer be available for purchase. Autodesk will integrate functionality similar to Ecotect Analysis into the Revit® product family. This change will allow Autodesk to shift resources, maximizing development efforts on BIM and cloud-based solutions for building performance analysis and visualization. Logistics - iPad pilot program @ Oberlin College Applications for Fall 2010 semester are no longer being accepted. Applications are due Friday, August 27 and will be evaluated by staff in OCTET and CTIE (Center for Teaching Innovation and Excellence). Participants will be chosen such that there is a broad representation of disciplines and pedagogical styles. Participants will be selected and contacted by September 1, 2010.

Richard Dawkins’ “The Magic of Reality” is an educational iPad app Richard Dawkins, a British evolutionary biologist and bestselling author of books like The Selfish Gene and The God Delusion, recently launched his latest book The Magic of Reality in the form of an interactive app for the iPad. Expertly illustrated by Dave McKean, the book presents the reader with 12 questions and their answers. It first goes through the answers provided for those questions in cultural and religious myths and traditions and then lays out the modern scientific explanations that we know now. The book was released on Sep. 15 in the UK and is going to be launched on Oct. 4 in the United States. 50 Education Technology Tools You Can Start Using Today 6 Time-Saving Writing Apps For Students 8.22K Views 0 Likes For anyone who has ever had to write a paper, you know that getting the ideas down when they come to you is important.

Using Dropbox in the Classroom When I mention Dropbox to friends and colleagues, I usually get one of two responses – a knowing smile and nod, or a puzzled and quizzical look. Whether you know what the program is, you have likely heard the name. But really, what is Dropbox? Dropbox is many things — a multifaceted tool that’s so powerful, you’ll continue to discover new ways to use it. But the short and sweet of it is this: you can use it to store and sync documents and files across computers, tablets, and smart phones.

AirServer – 30 Apple TVs for the price of One (and instant sharing and engagement in the Classroom) This is not a Plug. I actually happily used AirServer’s competitor, Reflector, before I discovered AirServer, and it has some features AirServer lacks ( namely the ability to record the iPad screen in action on your computer). I also am a happy owner of an AppleTV at home. What is your tech of choice for getting groups of children interacting with technology? Interactive Whiteboards? I was a big fan early on.