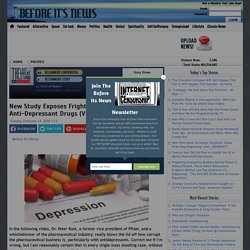 Peter Rost, a former vice president of Pfizer, and a whistleblower of the pharmaceutical industry. really blows the lid off how corrupt the pharmaceutical business is, particularly with antidepressants. CBI-Knowledgebase for Addiction Related Genes. LSD and Ego Dissolution. I'd been itching for some time to try a larger lsd dose (8 hits, each most likely of a pretty typical strength for the U.S.) than I had in the past and a four-day weekend provided the opportunity. 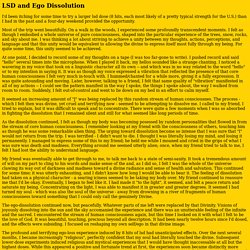 Most of the trip went beautifully. On a walk in the woods, I experienced some profoundly transcendent moments. I felt as though I embodied a whole universe of pure consciousness, shaped into the particular experience of the trees, snow, rocks, and sky about me. I was thinking a lot about striving to achieve a unity between my thoughts, actions, perceptions, and language and that this unity would be equivalent to allowing the divine to express itself most fully through my being. For quite some time, this unity seemed to be achieved. How Kappa Opioid Receptors Drive Anxiety. A cellular mechanism has been discovered by which kappa opioid receptors (KORs) drive anxiety. 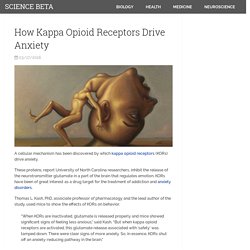 These proteins, report University of North Carolina researchers, inhibit the release of the neurotransmitter glutamate in a part of the brain that regulates emotion. KORs have been of great interest as a drug target for the treatment of addiction and anxiety disorders. Thomas L. Kash, PhD, associate professor of pharmacology and the lead author of the study, used mice to show the effects of KORs on behavior. The Chemical Synapse. 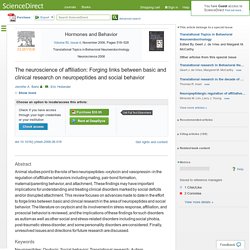 McCarthy Mount Sinai School of Medicine, One Gustave L. Received 16 May 2006, Revised 15 June 2006, Accepted 21 June 2006, Available online 1 August 2006 Choose an option to locate/access this article: How does science explain feelings and emotions? What happens in our body, how do they help us? - Quora. Emotional Biochemistry. Pilar Gerasimo · Like it or not, emotions share some very real biochemical links with your nervous, endocrine, immune and digestive systems. 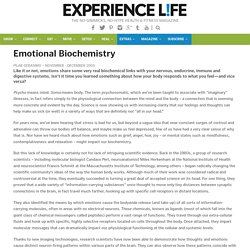 Isn’t it time you learned something about how your body responds to what you feel—and vice versa? Psycho means mind. Soma means body. Temporary disconnects shed light on long-term brain dysfunction. Will we ever be able to understand the cacophonous chatter taking place between the 80 million neurons in our brains? 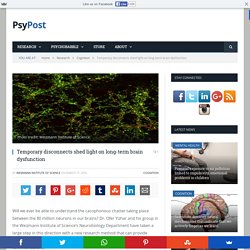 Dr. Ofer Yizhar and his group in the Weizmann Institute of Science’s Neurobiology Department have taken a large step in this direction with a new research method that can provide scientists with targeted control over vital parts of the brain’s communications. Yizhar works in the relatively new field of optogenetics, in which scientists use genetic engineering and laser light in thin optical fibers to investigate the living brain. With these tools, scientists can modulate and control the activities of nerve circuits in the brain, and thus begin to unravel the networks of links and nodes in the brain’s communications systems. How and Why Transtheoretic Transdiagnostic Psychotherapy Works. Two blogs ago I explain why cognitive behavior therapy works. 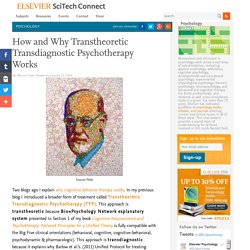 In my previous blog I introduced a broader form of treatment called Transtheoretic Transdiagnostic Psychotherapy (TTP). This approach is transtheoretic because Bio«Psychology Network explanatory system presented in Section 1 of my book Cognitive Neuroscience and Psychotherapy: Network Principles for a Unified Theory is fully compatible with the Big Five clinical orientations (behavioral, cognitive, cognitive-behavioral, psychodynamic & pharmacologic). The disused connections are eliminated pruning pdf. Calcium reveals connections between neurons. A team led by MIT neuroscientists has developed a way to monitor how brain cells coordinate with each other to control specific behaviors, such as initiating movement or detecting an odor. 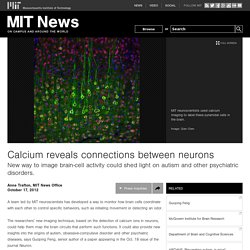 The researchers’ new imaging technique, based on the detection of calcium ions in neurons, could help them map the brain circuits that perform such functions. It could also provide new insights into the origins of autism, obsessive-compulsive disorder and other psychiatric diseases, says Guoping Feng, senior author of a paper appearing in the Oct. 18 issue of the journal Neuron. “To understand psychiatric disorders we need to study animal models, and to find out what’s happening in the brain when the animal is behaving abnormally,” says Feng, the James W. and Patricia Poitras Professor of Neuroscience and a member of the McGovern Institute for Brain Research at MIT. Lead author of the Neuron paper is McGovern Institute postdoc Qian Chen. 3D brain map reveals connections between cells in nano-scale. Scientists have created an unprecedented high-resolution map of the brain that reveals structures as small as those found in individual nerve cells. 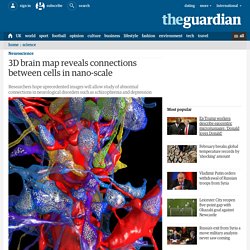 They produced the 3D map from a compilation of images taken with nanoscale resolution, making it possible to pick out features measured in millionths of a millimetre. Researchers plan to use the tool to study the abnormal connections between brain cells that underlie debilitating neurological disorders such as schizophrenia and depression. “We’re talking about imaging close to the level of a molecule,” said Narayanan Kasthuri, a neurobiologist at Harvard University, who led the team behind the map. Kasthuri and colleague Jeff Lichtman’s team built a system that automatically slices a subject brain into thousands of thin sections. After staining the slices to pick out different tissues, an electron microscope was trained to take a pictures of each slice. We put the fun in funiculus. Many behaviors occur at food sites, such as aggregation, courtship, and egg-laying site selection. 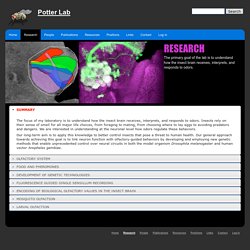 However, the odorants that influence these behaviors at food sites is not clear. We discovered a new olfactory pathway in Drosophila that links food-odor perception to pheromone signaling. By using a large arena 4-field olfactory assay, in which dozens of flies are simultaneously stimulated with an odor, we found that male flies, when stimulated with food-odors such as apple cider vinegar, banana, and yeast paste, deposit a pheromone onto their surroundings.

This pheromone acts like a tag to link food-odor perception to social communications. How the brain can distinguish good from bad smells. Scientists from Max Planck Institute for Chemical Ecology in Jena, Germany, have found that in fruit flies, the quality and intensity of odors can be mapped in the so-called lateral horn. They have created a spatial map of this part of the olfactory processing system in the fly brain and showed that the lateral horn can be segregated into three activity domains, each of which represents an odor category. Whether an odor is pleasant or disgusting to an organism is not just a matter of taste. Often, an organism's survival depends on its ability to make just such a discrimination, because odors can provide important information about food sources, oviposition sites or suitable mates. 'Big data' drills down into metabolic details - Scienmag. HOUSTON – (March 9, 2016) – Rice University bioengineers have introduced a fast computational method to model tissue-specific metabolic pathways.

Their algorithm may help researchers find new therapeutic targets for cancer and other diseases. What are Endorphins? Not only are endorphins thought to block the sensation of pain, but they also work to lower stress levels and support the immune system. Some studies have indicated that they can cause certain cells, called natural killer cells, to be triggered. Once those cells are stimulated, they work to fight cancer cells. As a result, some researchers believe that chemicals may be used to lower the likelihood of developing cancer or to help fight the disease.

ELECTROMAGNETIC ENERGY FLOW 4D BRAIN IMAGING prototypeV0125. A Functional Cartography of Cognitive Systems in @PLOSCompBiol. #KeepItWhite because our unity would shake the very Earth. SNEAKER PIMPS - "Spin Spin Sugar" (Armand's Dark Garage Mix) Why People with Down Syndrome Invariably Develop Alzheimer’s Disease. A new study by researchers at Sanford-Burnham Medical Research Institute reveals the process that leads to changes in the brains of individuals with Down syndrome—the same changes that cause dementia in Alzheimer’s patients.

The findings, published in Cell Reports, have important implications for the development of treatments that can prevent damage in neuronal connectivity and brain function in Down syndrome and other neurodevelopmental and neurodegenerative conditions, including Alzheimer’s disease. The Sapir-Whorf Hypothesis: Language in the Brain. Quotes About Science Neurology (1 quote) Understanding Traumatic Brain Injury. Damaged Brain Nerve Fibres. How is our perception shaped. Studies reveal brain circuits that shape perceptions. How Our Brains Overrule Our Senses - 12/07/2015. Depression. Watch this Oliver Sacks interview from 1989. Recreational Drugs. Brain Posts. Judith Horstman Explores the Aging Brain and Scientific Advancements. Gene mutation linked to reckless drunken behaviour. The Scripps Research Institute - News and Views. THE BRAIN FROM TOP TO BOTTOM. Mechanism that Controls When We Sleep and When We Wake Discovered. Составившее их, возникновение структуры.

In other words: inside the lives and minds of real-time translators. Julie Holland Vault : Julie Holland's Presentation at 2010 Psychedelic Science in the 21st Century. Ergot fungus. Brain's habenula signals how bad things could be. Dopamine and schizophrenia. Dopamine is a neurotransmitter. Why Addiction is NOT a Brain Disease - Mind the Brain. Serotonin - Receptors and effects - Pharmacorama. Serotonin Keeps You Sad and Sleepy » Writing Program. Neurotransmitters and Sleep Regulation.