Theconversation. People have long dreamed of being smarter, stronger, faster. 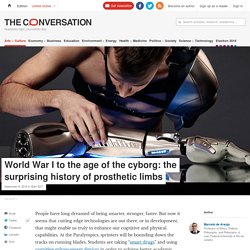 But now it seems that cutting edge technologies are out there, or in development, that might enable us truly to enhance our cognitive and physical capabilities. At the Paralympics, sprinters will be bounding down the tracks on running blades. Students are taking “smart drugs” and using cognitive enhancement devices in order to achieve better academic performance. These recent advances in science and technology have led to much discussion on the ethics of human enhancement, giving the impression that this is an era-defining moment, one in which the very definition of what it is to be “human” is being challenged.

But such concerns over human enhancement are not new. As thousands of soldiers returned from World War I with severe physical disabilities, engineers, physicians and politicians had to figure out how to enable the ex-combatants to return to the workforce. Supermen? … or automatons? 21st century enhancement. Why STEM subjects and fashion design go hand in hand. The fashion industry evokes images of impossibly beautiful people jet setting around the world in extravagant finery. 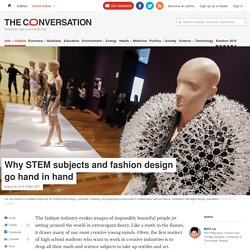 Like a moth to the flames, it draws many of our most creative young minds. Often, the first instinct of high school students who want to work in creative industries is to drop all their math and science subjects to take up textiles and art. As a fashion and textile designer myself, I would like to explain how this is a bad strategy and how the future of fashion requires science, technology, engineering and mathematics (STEM skills) more than ever. Beneath the glamorous façade, the fashion industry is undergoing disruptive changes due to rapid advances in technology. We take it for granted that you can use your Iphone to watch a fashion runway show on YouTube, Google the garment to find an online retailer like Net-A-Porter, pay for it using PayPal and then upload a selfie onto Snapchat. Materials that were theoretical thirty years ago have become pervasive. Ray Kurzweil on the Future of Nanotechnology. Nicholas Negroponte: Nanobots in Your Brain Could Be the Future of Learning.

Transcript Nicholas Negroponte: I gave a talk at the first TED in 1984 that was two hours long and it had five predictions in it that more or less all came true. 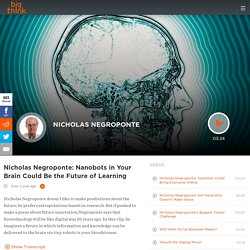 And people called them predictions but they really weren’t predictions. They were extrapolations. The reason I talked for two hours is not because I was Fidel Castro and I was giving a rally. It’s because I had 15 years of research stored up and was about to open the media lab and it was real easy to talk about what we were gonna do and some of it even seemed old hat even though in retrospect people thought, oh, this is amazingly predictive. 30 years later, they say make a prediction as if I had made predictions the first time which I hadn’t. Because if you inject tiny robots into the bloodstream they can get very close to all the cells and nerves and things in your brain, really close.

Around 100 years ago a father and his son in north England conducted an experiment that would revolutionise the way scientists study molecules. 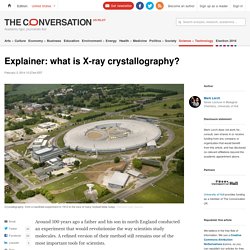 A refined version of their method still remains one of the most important tools for scientists. To achieve this feat, William Henry Bragg and his son William Lawrence Bragg used table salt (sodium chloride). They prepared a clean crystal of salt and shone X-rays on it, which created a beautiful geometric pattern on a photographic paper placed behind it. Others had done similar things before, but the Braggs made an intuitive leap. Synchrotron: how it works [video infographic] Synchrotron technology. Theconversation. Science is like high-performance racing: today’s Formula One machine is all too soon the jalopy of tomorrow. 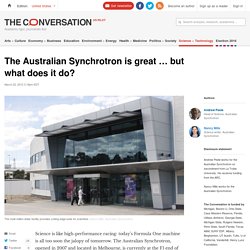 The Australian Synchrotron, opened in 2007 and located in Melbourne, is currently at the F1 end of the spectrum. Needless to say, its 120 staff and thousands of active researchers would like to keep it that way. What is a synchrotron? A synchrotron is an extremely powerful source of X-rays. 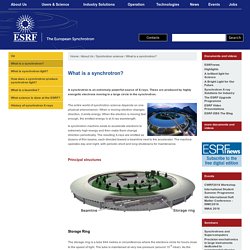 These are produced by highly energetic electrons moving in a large circle in the synchrotron. The entire world of synchrotron science depends on one physical phenomenon: When a moving electron changes direction, it emits energy. When the electron is moving fast enough, the emitted energy is at X-ray wavelength. A synchrotron machine exists to accelerate electrons to extremely high energy and then make them change direction periodically. Nobelprize.org. Welcome to DST Group - Defence Science and Technology Group. Airbus, a leading aircraft manufacturer.

On the top menu, click on News, Events and Publications. There are fact sheets, case studies, information booklets and more to download. – karenmalbon