The Chemistry of Caffeine

Caffeine: Facts, Usage, and Side Effects. Caffeine is the most widely used psychoactive substance on the planet. 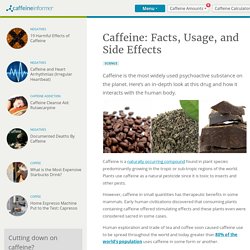 Here’s an in-depth look at this drug and how it interacts with the human body. Caffeine is a naturally occurring compound found in plant species predominantly growing in the tropic or sub-tropic regions of the world. Plants use caffeine as a natural pesticide since it is toxic to insects and other pests. However, caffeine in small quantities has therapeutic benefits in some mammals. Caffeine. Listen It's almost midnight and Aaron has already had a full day of school, work, and after-school activities. 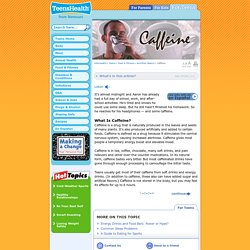 He's tired and knows he could use some sleep. But he still hasn't finished his homework. What Caffeine Does To Your Brain. Your Brain On Coffee. Chemistry in every cup. Coffee has a conflicting reputation - is it a guilty pleasure or a life saving elixir? 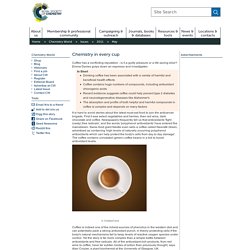 Emma Davies gulps down an espresso and investigates In ShortDrinking coffee has been associated with a variety of harmful and beneficial health effectsCoffee contains huge numbers of compounds, including antioxidant chlorogenic acids Recent evidence suggests coffee could help prevent type 2 diabetes and neurodegenerative diseases like Alzheimer's The absorption and profile of both helpful and harmful compounds in coffee is complex and depends on many factors. The Chemistry of Caffeine - www.ChemistryIsLife.com. Chemistry's Role When you consume caffeine, a chemical reaction occurs in your brain. 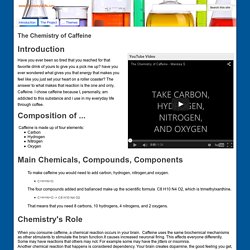 Caffeine uses the same biochemical mechanisms as other stimulants to stimulate the brain function.It causes increased neuronal firing. This affects everyone differently. Caffeine! What Is Caffeine and How Does It Work? By Anne Marie Helmenstine, Ph.D. 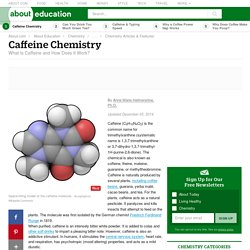 Updated December 05, 2014. Caffeine (C8H10N4O2) is the common name for trimethylxanthine (systematic name is 1,3,7-trimethylxanthine or 3,7-dihydro-1,3,7-trimethyl-1H-purine-2,6-dione). The chemical is also known as coffeine, theine, mateine, guaranine, or methyltheobromine. Caffeine is naturally produced by several plants, including coffee beans, guarana, yerba maté, cacao beans, and tea. For the plants, caffeine acts as a natural pesticide.