Dear Data. 19 Very Real And Emotional Struggles Of Having A Fitbit (Or Does Your Fitbit Have You?) Something I learned very quickly about Fitbits: You do not own your Fitbit—your Fitbit owns you. 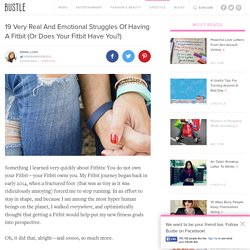 My Fitbit journey began back in early 2014, when a fractured foot (that was as tiny as it was ridiculously annoying) forced me to stop running. In an effort to stay in shape, and because I am among the most hyper human beings on the planet, I walked everywhere, and optimistically thought that getting a Fitbit would help put my new fitness goals into perspective. Oh, it did that, alright—and sooooo, so much more. I know a lot of people are convinced that Fitbits and other tracking devices are just a fad, but for some of us, they quickly became a religion: I started setting my alarm before the crack of dawn, rolling into DC for an internship two hours before I was supposed to get in, and spent my mornings manically jog-walking around monuments while trying not to make eye contact with other Fitbit slaves—er, I mean, users—for three straight months.

This happy smile haunts your dreams. Diabetic Charts A Year's Worth Of His Health Data. The Measured Man. Larry Smarr, an astrophysicist turned computer scientist, has a new project: charting his every bodily function in minute detail. 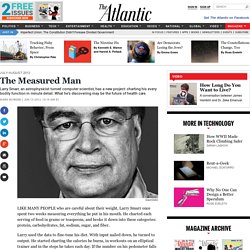 What he’s discovering may be the future of health care. Grant Delin Like many people who are careful about their weight, Larry Smarr once spent two weeks measuring everything he put in his mouth. The Woman vs. The Stick: Mindfulness at Quantified Self 2012. “Mindfulness” may be Quantified Self’s best-kept secret. 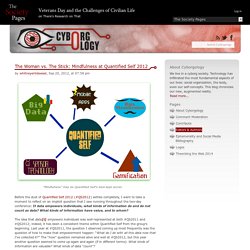 View From Nowhere. Franz Kline, Suspended, 1953 On the cultural ideology of Big Data. 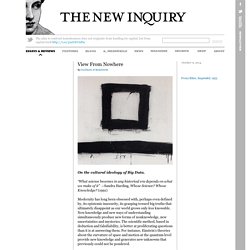 “What science becomes in any historical era depends on what we make of it” —Sandra Harding, Whose Science? Whose Knowledge? The Qualified Self: health and wellbeing services for older people. This project explores how customised technology services can support older people through personal insights rather than numerical data. 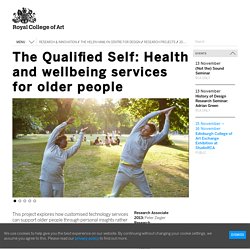 When a person ages, they have a different relationship with their bodies - managing health and wellbeing becomes more complex - and they have a different relationship with technology too. The United States of Metrics. Photo The map of the United States that appeared on Nerve.com this year was in many ways similar to the maps that pop up on the Internet during election seasons. 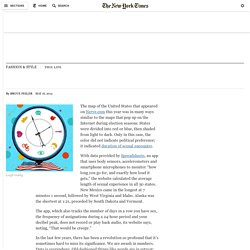 States were divided into red or blue, then shaded from light to dark. Only in this case, the color did not indicate political preference; it indicated duration of sexual encounter. With data provided by Spreadsheets, an app that uses body sensors, accelerometers and smartphone microphones to monitor “how long you go for, and exactly how loud it gets,” the website calculated the average length of sexual experience in all 50 states. New Mexico came in the longest at 7 minutes 1 second, followed by West Virginia and Idaho.

Beyond Data Visualization: Experiencing Data With All The Senses. For all the familiar benefits of visualizing data, there are limitations to relying on a single sense to gain understanding. 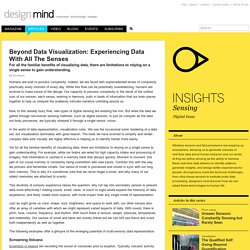 By Eric Boam Humans are built to process complexity. Indeed, we are faced with unprecedented levels of complexity practically every moment of every day. While this flow can be potentially overwhelming, humans are evolved to make sense of the deluge. Our capacity to process complexity is the result of the unified sum of our senses; each sense, working in harmony, pulls in loads of information that our brain pieces together to help us interpret the endlessly intricate narrative unfolding around us.

The Qualified Self: Going Beyond Quantification. By Eric Boam & Jarrett Webb As humans, we are driven to seek ever-deeper understandings of both the world around us and the world within us. 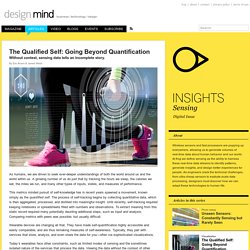 A growing number of us do just that by tracking the hours we sleep, the calories we eat, the miles we run, and many other types of inputs, states, and measures of performance. This metrics minded pursuit of self-knowledge has in recent years spawned a movement, known simply as the quantified self. The process of self-tracking begins by collecting quantitative data, which is then aggregated, processed, and distilled into meaningful insight. Until recently, self-tracking required keeping notebooks or spreadsheets filled with numbers and observations. Wearable devices are changing all that. Today’s wearables face other constraints, such as limited modes of sensing and the sometimes isolated nature of the services that process the data.

This is what we describe as the qualified self. We can clearly see the quantitative side of these sleep behaviors. Beyond the quantified self: the reflexive monitoring self. The Qualified Self. This post, however, takes a break from The Great Dualism Debates of 2013 and reflects instead on some musings that have been whirring around in my brain since #TtW13 based on discussions surrounding the Quantified Self. 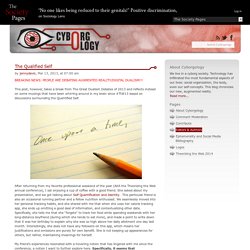 After returning from my favorite professional weekend of the year (AKA the Theorizing the Web annual conference), I sat enjoying a cup of coffee with a good friend. She asked about my presentation, and we got talking about Self Quantification and Identity. This particular friend is also an occasional running partner and a fellow nutrition enthusiast.