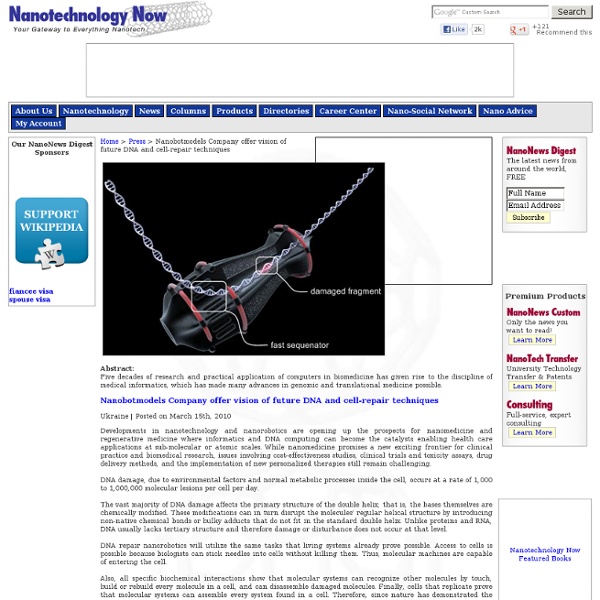 Home > Press > Nanobotmodels Company offer vision of future DNA and cell-repair techniques Abstract: Five decades of research and practical application of computers in biomedicine has given rise to the discipline of medical informatics, which has made many advances in genomic and translational medicine possible. Ukraine | Posted on March 15th, 2010 Developments in nanotechnology and nanorobotics are opening up the prospects for nanomedicine and regenerative medicine where informatics and DNA computing can become the catalysts enabling health care applications at sub-molecular or atomic scales. While nanomedicine promises a new exciting frontier for clinical practice and biomedical research, issues involving cost-effectiveness studies, clinical trials and toxicity assays, drug delivery methods, and the implementation of new personalized therapies still remain challenging. DNA repair nanorobotics will utilize the same tasks that living systems already prove possible. Bookmark: Nanomedicine Related:  article masters

"Can We Achieve Immortality?" Although the speed of light still remains sacrosanct, are we at least making progress toward profaning time? In fact, breaking out of the shackles of the here and now can be done—but it's not terribly feasible. That's because, as Einstein instructed us, the passage of time is relative. Time moves faster at greater distances from the center of a massive object, such as the Earth; the clocks on satellites passing overhead have to be calibrated for these miniscule, albeit very real, relativistic discrepancies. Remarkably, this effect is detectable at a difference in height of a mere foot, as National Institutes for Standards and Technology scientists demonstrated with two atomic clocks last year. Ergo, our head ages quicker than our hearts... though only about 90 billionths of a second over a lifetime. This phenomenon of time dilation can, however, start to pay dividends for an astronaut standing on a neutron star—the compact, super-massive remnant of a giant star.

Phagocyte During an infection, chemical signals attract phagocytes to places where the pathogen has invaded the body. These chemicals may come from bacteria or from other phagocytes already present. The phagocytes move by a method called chemotaxis. History[edit] Ilya Ilyich Mechnikov in his laboratory The Russian zoologist Ilya Ilyich Mechnikov (1845–1916) first recognized that specialized cells were involved in defense against microbial infections. A year later, Mechnikov studied a fresh water crustacean called Daphnia, a tiny transparent animal that can be examined directly under a microscope. In 1903, Almroth Wright discovered that phagocytosis was reinforced by specific antibodies that he called opsonins, from the Greek opson, "a dressing or relish".[19] Mechnikov was awarded (jointly with Paul Ehrlich) the 1908 Nobel Prize in Physiology or Medicine for his work on phagocytes and phagocytosis.[7] Phagocytosis[edit] Phagocytosis in three steps: 1. Methods of killing[edit] Extracellular[edit]

Cool science, but is it news? The other day a news release with this headline landed in my email: "McMaster University researchers discover drug destroys human cancer stem cells but not healthy ones." Of course, the writers of the press release know, that I know, that the discovery didn’t just happen in the last few days. The headline is press release code for: "our researchers have been working on this for a few years and they are about to be published in a prominent medical journal, and if their work is deemed significant enough for Cell, it might also be interesting enough for the daily news." It’s something we struggle with every day, trying to decide when to report on raw, technical and basic scientific discoveries, and how to avoid exaggerating the impact of these early, incremental developments. It’s tempting to get excited. Right now, new technology is allowing researchers to throw all kinds of molecules at cancer cells, to see what happens. It has happened before. But he has not abandoned research on DCA.

Lesch–Nyhan syndrome Lesch–Nyhan syndrome (LNS), also known as Nyhan's syndrome, Kelley-Seegmiller syndrome and juvenile gout,[1] is a rare inherited disorder caused by a deficiency of the enzyme hypoxanthine-guanine phosphoribosyltransferase (HGPRT), produced by mutations in the HPRT gene located on the X chromosome. LNS affects about one in 380,000 live births.[2] The disorder was first recognized and clinically characterized by medical student Michael Lesch and his mentor, pediatrician William Nyhan, who published their findings in 1964.[3] The HGPRT deficiency causes a build-up of uric acid in all body fluids. This results in both hyperuricemia and hyperuricosuria, associated with severe gout and kidney problems. LNS is an X-linked recessive disease: the gene mutation is usually carried by the mother and passed on to her son, although one-third of all cases arise de novo (from new mutations) and do not have a family history. Signs and symptoms[edit] Overproduction of uric acid[edit] LNS in females[edit]

Anti-aging drug breakthrough Drugs that combat aging may be available within five years, following landmark work led by an Australian researcher. The work, published in the March 8 issue of Science, finally proves that a single anti-aging enzyme in the body can be targeted, with the potential to prevent age-related diseases and extend lifespans. The paper shows all of the 117 drugs tested work on the single enzyme through a common mechanism. "Ultimately, these drugs would treat one disease, but unlike drugs of today, they would prevent 20 others," says the lead author of the paper, Professor David Sinclair, from UNSW Medicine, who is based at Harvard University. The target enzyme, SIRT1, is switched on naturally by calorie restriction and exercise, but it can also be enhanced through activators. Although research surrounding resveratrol has been going for a decade, until now the basic science had been contested. The technology was sold to pharmaceutical giant GlaxoSmithKline in 2008[i].

U.S. Women Are Dying Younger Than Their Mothers, and No One Knows Why - Grace Wyler While advancements in medicine and technology have prolonged life expectancy and decreased premature deaths overall, women in parts of the country have been left behind. The Affordable Care Act took a major step toward implementation last Tuesday with the launch of the online insurance exchanges, limping across the finish line despite three years of Republican obstruction that culminated in this week’s 11th hour attempt to dismantle the law by shutting down the federal government. It’s easy to forget, amid the hyper-partisan controversy, that the main purpose behind President Obama’s signature health-care reform law is not to curtail individual freedom or send senior citizens to death panels, but to give more Americans access to health insurance. Whether you think the Affordable Care Act is the right solution or a dangerous step toward tyranny, it’s hard to dispute that the U.S. health-care system is broken. “I was shocked, actually,” Kindig said.

Biological Clock It may not be the eternal spring that Ponce de León searched for, but thanks to Steve Horvath PhD, a professor of human genetics and biostatistics at the University of California, Los Angeles, the Fountain of Youth is not as elusive as it once was. Our Real Biological Clock Horvath has developed a biological clock that makes it possible to measure the age of humans via tissue samples. The implications are huge. How It Works Horvath's work falls into an area of genetics called epigenomics, which studies epigenomes, the chemical compounds that modify DNA to tell it what to do. The DNA Data So in 2009, when Horvath decided to tackle the arduous process of developing biomarkers of aging, he turned to methylation data. He began by collecting data from open access repositories, which amass DNA research from scientists around the world. The Results What he found is that there were some tissues that consistently displayed a different biological age.

Exercise 10 min a day to live longer Even as little as 75 minutes a week of physical activity can extend your life by nearly two years, according to U.S. researchers who found some benefits regardless of body weight. The study by Steven Moore of the U.S. National Cancer Institute and his co-authors also suggests that regular activity would boost life expectancy even more. The researchers pooled data on 650,000 men and women aged 40 and older in Sweden and the U.S. who reported their activity levels. The findings show that 75 minutes a week — or just over 10 minutes a day — was associated with 1.8 years of added life expectancy, compared to getting no leisure-time activity. As well, brisk walking for 450 minutes a week, just over an hour a day, was associated with living 4.5 years longer. The researchers in the study in PLOS Medicine hope the findings convince sedentary people that even a modest physical activity program can boost health. Investigators also considered weight categories: Intensity rule of thumb