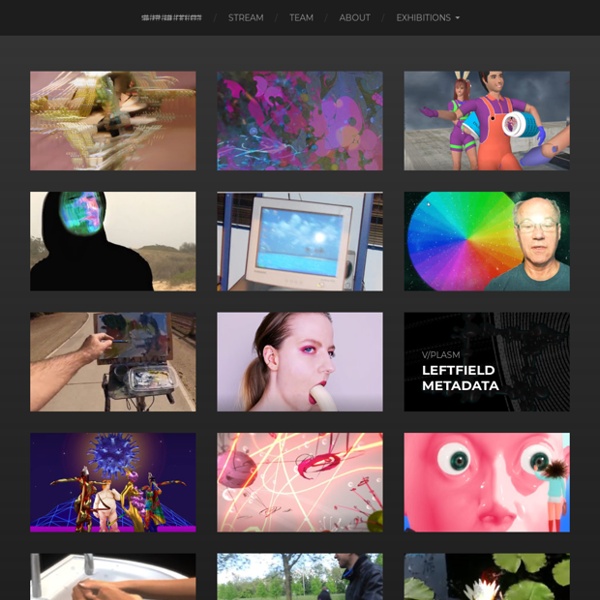 Kupfer A gastronomic evening of insect appreciation, insect canapés, talks and discussion. As the human population multiplies, could entomophagy be an alternative to our imminent food crises? Online ad for Samsung Galaxy Note II featuring us. Believe it or not. Liquidscapes was an exhibition by Bijari at the Brazilian Embassy during London Olympic Games. FWA awarded flash website installation to promote the John Lewis lighting range. Carsten Höller’s Whimsical Experiences at The New Museum Last week the New Museum opened the first New York survey of works by German artist, Carsten Höller. Ongoing until early next year, the entire exhibition is an immersive, interactive installation. Twenty years in the making, Höller has created an artistic vision that is equal parts a scientific exploration of architecture and structural engineering and a real-life lab. Höller’s pieces are designed to push the limits of human sensorial perception and logic through carefully executed participatory experiences. Prior to entering the show we were asked to read and sign a waiver of liability, which is very unusual for any kind of exhibition at a museum, but definitely a good sign.

Connections by theme I'm Thomas Campbell. In my first few months as director of the Metropolitan Museum, some colleagues and I developed the idea of a series that would get people thinking about the Met's collection in a new way. The result is Connections, an exploration of the Met's holdings by staff from around the Museum. These journeys through the collection are not driven so much by art history as by broad, often personal themes. LINDA ZACKS : art & typography Keep on the lookout for my Holler posters as they pop up in the NYC subway tunnels…there’s a bunch of different versions teeming with Tupac lyrics…YESSSSSSS! more wood bread buttered with paint OR short stack of woodcakes with paint syrup? more Typewriter Art: A Modern Anthology by Barrie Tullett, will be published later this month.

The Met Around the World The Met Around the World presents the Met’s work via the global scope of its collection and as it extends across the nation and the world through a variety of domestic and international initiatives and programs, including exhibitions, excavations, fellowships, professional exchanges, conservation projects, and traveling works of art. The Met Around the World is designed and maintained by the Office of the Director. 3D Geometric Light Graffiti Creates Mesmerizing Glow Armed with an arsenal of custom light painting tools (various LED and xenon flashlights) he designed himself, Trevor Williams creates mesmerizing effects that must be seen to be believed. The Japan-based photographer and light painting pioneer produces individual light images, as well as group paintings with the collective he founded, Fiz-iks. Paying special attention to location, the group explores Japanese architecture to construct surprising narratives that meld the modern artistic technique with traditional landscapes. The photographs feature bright colorful spheres, neon cylinders, spastic light beams – each image revealing a mesmerizing pattern.

Design and the Elastic Mind, MoMA 'Revolutions,' Paola Antonelli writes in her introduction to 'Design and the Elastic Mind', her just-opened exhibition at New York's Museum of Modern Art, 'are not easy on us.' It's a hell of a way to start a design show. That might be because it's a hell of a show. Click here to see works from the exhibition 'Design and the Elastic Mind', on view through May 12 in the museum's sixth-floor galleries, takes on ideas of the future, and how design works - and will work - with it. The over 200 objects, drawings, ideas, speculations, nanotechnologies, photographs, concepts, possibilities, environments, arguments, polemics, drawings, renderings, models and more on view here, combine to create a vision of the future that isn't apocalyptic, or even post-apocalyptic, but instead that exemplifies the range we cross-disciplinarily express these days; the work is everything from quietly hopeful to overtly celebratory, from politically argumentative to aesthetically stunning.

Building Facades Of The Future Will Display Music And Video Art The “Augmented Structures v1.1: Acoustic Formations / İstiklâl Caddesi” exhibition by Salon2 in Istanbul, Turkey, plays with sound, music, light, video, mathematics, visual arts and architecture for a new type of building and streetscape experience. Each of these disciplines is transformed into another, creating a multi-sensory experience on the “living canvas.” This interdisciplinary design provides a glimpse into what buildings might look like in the future.

Optical Illusion Street Art Installation Recreates City Streets We don’t typically think about how architecture affects how we navigate a city or town. It’s such a naturalized part of the experience that we tend to ignore how restricted our movement can truly be. Alleyways, streets, grids, public transportation, skyscrapers, all exist within a very specific set of parameters that all people operate under when they inhabit or navigate a series of places. So would we be surprised if certain streets or pathways cropped up one day that were never there before? How would it affect how we see the layout of a city? Deconstructing Ways by Isidro Blasco is an installation that creates the illusion of a new street being etched into the corner of two alleys.

Typographic Optical Illusions Predict The Future Of Augmented Reality As Augmented Reality apps become more ubiquitous our dreams for the potential of the technology increase. Can you imagine a world where the the hovering social network information, travel information or map directions integrate seamlessly with the real world? Currently relegated to tablets and phones, it is difficult to imagine Augmented Reality (AR) transcending the level of novelty without divesting themselves from these trappings first. Cripplebush Ghost Tour Local history by SMS2007 Candy Chang collaborated with Sarah Williams, Jennifer Kaminsky, Catherine Herdlick, Amanda Huron, and Michael Wilkerson to create the Cripplebush Ghost Tour, an interactive project that combines mobile technology, public space and neighborhood history. Over 200 stickers were placed in specific public locations in Williamsburg and Greenpoint in Brooklyn. By texting the unique 4-digit code on the sticker, passersby immediately received an SMS with brief history about the person behind their named location, such as Edmund Driggs of Driggs Avenue, Patrick McCarren of McCarren Park, Jaime Campiz of Campiz Playground.

Global Studio UN goals furthered From 2006-2008 Candy was involved with Global Studio, a program where international students, academics and professionals come together in one city for a month to learn from and collaborate with community organizations. Initiated by the UN Millennium Development Goals, the program has worked in Istanbul in 2005, Vancouver in 2006, and Johannesburg in 2007, 2008 and 2009. Artists as Agents of Change Stories of art and artists inspiring, inciting, and leading organizational transformation. Featuring three dynamic leaders in the field, these 12-minute talks explored the outputs and impacts of innovative projects across the country. An in-depth discussion followed and discussion among Virtual Summit participants took place simultaneously via #ArtsFwd on Twitter. These Talks stream in the following order. Policy, Prisons, and Pranks: Artists Collide with the WorldRuby Lerner, President & Founding Director, Creative Capital In this talk, Ruby Lerner will discuss artists working at the intersections of science, technology, community organizing, entrepreneurship and the media.

Related:
Related:  Locaux et Numérique   -  Our Dear Leader makes a Stand   -  Makes me think...   -  "Love Makes Us Act Like We Are Fools" Can This Be Avoided?   -  What Makes iOS First Choice for Developers?   -  Qult Covers Makes Youre Apartments a Lavish Accommodation - Izzz   -  Mobile Web @ W3C   -  Untrusted Connection   -  You're living in a computer simulation, and math proves it   -  20 Things I Learned While I Was in North Korea | Wait But Why   -  This Infographic Reveals the Secrets of the Happiest Couples   -  10 Mind-Blowing Theories That Will Change Your Perception of the World   -  You Are Not So Smart   -  Brain Pickings – An inventory of the meaningful life.   -  Relationship Rules   -  Mapping Emotions On The Body: Love Makes Us Warm All Over