Jimmy Carter’s Disastrous Olympic Boycott - Nicholas Evan Sarantakes - POLITICO Magazine. Muhammad Ali was exhausted as he clambered from a plane on a tarmac in Tanzania as the waiting throng exploded with enthusiasm. 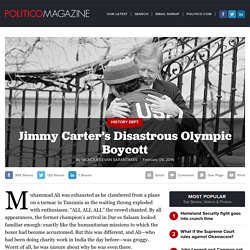 “ALI, ALI, ALI,” the crowd chanted. By all appearances, the former champion’s arrival in Dar es Salaam looked familiar enough: exactly like the humanitarian missions to which the boxer had become accustomed. But this was different, and Ali—who had been doing charity work in India the day before—was groggy. Worst of all, he was unsure about why he was even there. In a plan that seemed like a good one when it was hatched, U.S. Dropping the Torch: Jimmy Carter, the Olympic Boycott, and the Cold War: Amazon.co.uk: Nicholas Evan Sarantakes: 9780521176668: Books. Europeans considering boycott of Russia's World Cup. Football Fanaticos: Greatest World Cup Matches: West Germany-East Germany (1974)

Football is more than just a game: as the “real” world unfolds, football becomes caught up in it, and particular matches have particular political symbolism. 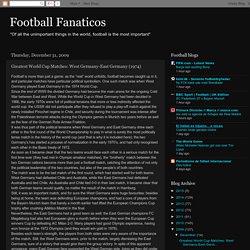 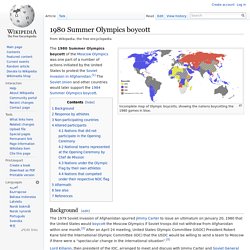 The 1980 Summer Olympics boycott of the Moscow Olympics was one part of a number of actions initiated by the United States to protest the Soviet invasion in Afghanistan.[1] The Soviet Union and other countries would later support the 1984 Summer Olympics boycott. Background[edit] The 1979 Soviet invasion of Afghanistan spurred Jimmy Carter to issue an ultimatum on January 20, 1980 that the United States would boycott the Moscow Olympics if Soviet troops did not withdraw from Afghanistan within one month.[2] After an April 24 meeting, United States Olympic Committee (USOC) President Robert Kane told the International Olympic Committee (IOC) that the USOC would be willing to send a team to Moscow if there were a “spectacular change in the international situation”.[3] 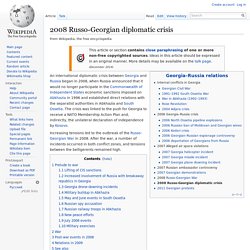 After the war, a number of incidents occurred in both conflict zones, and tensions between the belligerents remained high. Prelude to war[edit] Lifting of CIS sanctions[edit] What you need to know about rising tensions with Russia. The fraught relationship between Russia and the West has descended into renewed acrimony after a series of tense military and diplomatic confrontations. 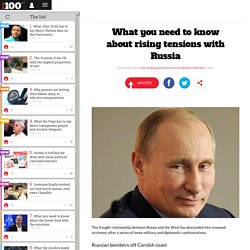 Russian bombers off Cornish coast News emerged yesterday that RAF jets had been scrambled to the Cornish coast to intercept two Russian Bear bombers just outside British airspace. David Cameron said Moscow was trying to make “some sort of a point”, but added: “I don’t think we should dignify it with too much of a response.” Alleged footage of the confrontation, filmed from one of the bombers, has been shown on Russian television (Picture: YouTube/TV Zvezda) While the presence of Russian warplanes probing Britain and Western Europe’s coastline is nothing new - Nato flew 400 intercepts last year - Robert Emerson, a security analyst, warns that increasing brinkmanship could lead to a costly mistake by one side or the other.

Robert Emerson Fraying ceasefire in Ukraine Alarm in the Baltics Russia is behaving aggressively. Ukraine crisis: Putin is counting on fact West has no desire for war - Comment - Voices - The Independent. The short answer, provided by geography, history and a cold evaluation of diplomatic and political realities, is that he cannot, unless the US and its Nato allies convince Moscow that it is ready for war with Russia, with all that this implies. 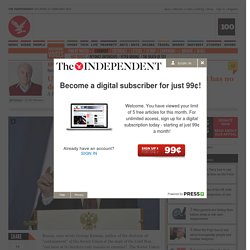 Otherwise they have two lesser options of countering Putin’s undeclared campaign to take control of eastern Ukraine by hybrid war, asymmetric war, creeping invasion – call it what you will. One is economic, the other military. Neither looks very promising, again unless the West is prepared to go all the way. The economic option, already being tried, is sanctions.

Rarely though do sanctions work, least of all against places like Russia, a supremely resilient country that has faced far worse in the past. Ukraine crisis: Russia is a threat to other Baltic states, warns Defence Secretary Michael Fallon - UK Politics - UK - The Independent. Michael Fallon urged Nato to prepare to repulse Russian aggression in “whatever form it takes” as he acknowledged tensions between the alliance and Moscow were “warming up”. 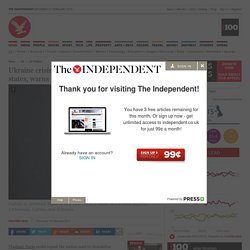 He spoke after Ukrainian government forces retreated from a key strategic town which has been under siege by pro-Russian separatists for weeks. Their departure from the town of Debaltseve followed fierce gun battles, despite a ceasefire agreed by both sides in Minsk last week. Ukraine: UK and EU 'badly misread' Russia. FIFA World Cup.