You're living in a computer simulation, and math proves it 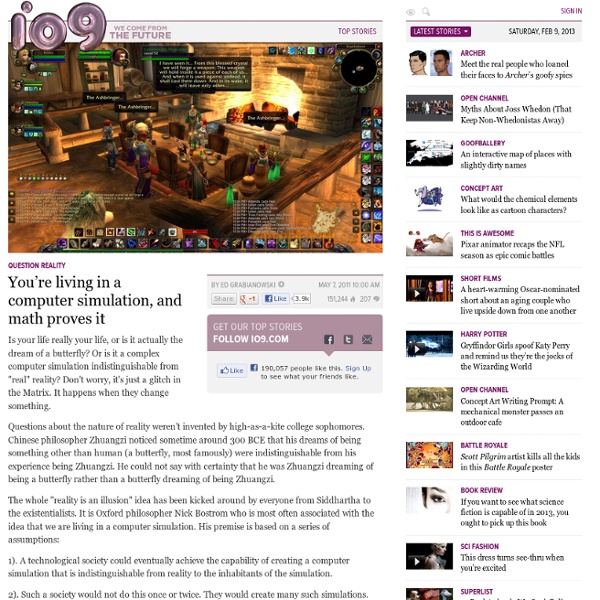 Professional blog | 21st Century Educator I've normally started my classes with a description of what math we will be learning, and a class discussion about what the math means. When I first started teaching, I would lecture for 30 minutes, and students would work for 60 minutes (I started in with a double block of math) during double block math classes, and in a 45 minute lesson, I would still lecture for 30 minutes, and students would get 15 minutes to practice and do other activities. I discovered early on in my teaching that the less time I talked, the more time students had to work on activities and exercises, and this led to improved understanding. I read research suggesting that adolescents could actively pay attention for about 10 - 15 minutes, so I focused on getting the lecture portion of my lesson down to this length, and on embedding more questions and subsequent discussion into my lecture. Today I tried something new. Here are some observations I had while I was circulating around the classroom.

World Population - Live Update In the following interactive, you can choose different years and see the population and growth rates for that year. World population in 2014 CE (now) is approximately: Population growth rate: 1.1% per year. Number of new people: 2.441 per second (or one each 0.41 seconds)210,928 per day76,988,670 per year We are currently adding over 75 million new people per year. Assumptions Most of the assumptions for the above interactive are contained in the excellent source: U.S Census Bureau Of course, the population figures you see in the above Flash interactive are best-guess estimates. You may also be interested in: 90% of those who ever lived, alive today? Rapid Urbanization Cities with more than 1 million inhabitants, as at 1996 [Image source] Why "UTC time"? UTC is the new name for what used to be called GMT (Greenwich Mean Time). Why "CE" and not "AD"? CE stands for "Common Era" and is commonly used these days instead of the more culturally specific "AD". Interesting Fact... Concluding Remarks

Maths Online Resource Banks « Number Loving Essential, essential resource banks that I have found invaluable and a good starting point for lesson planning, inspiration and ideas. 1) TES Teaching Resources The TES teaching resources in particular Mr Barton‘s Secondary Maths Collections. It is free and easy to sign up and the possibilities are endless! 2) Mr Barton Although already mentioned, Mr Barton is such a great website it needs a mention of its own. 3) Guardian Teacher Network In particular the mathematics resources are great. 4) MyMaths Integrate This part of the site is free, unbeknown to many. 5) Mathsfaculty Wow, this has it all. 6) S.Peter’s Collegiate Among many great resources look at the revision and exam material, great for practice and/or homework sheets. 7) Mathed Up Resources, including teaching Powerpoints for key stages 3, 4, 5. 8. Do not miss the interactive schemes of work available to download for free from Kangaroo Maths. 9) nRich These website is a must for puzzles and developing pupils lateral thinking skills.

The Magical Mind of Persi Diaconis - The Chronicle Review By Jeffrey R. Young Palo Alto, Ca. Persi Diaconis's unlikely scholarly career in mathematics began with a disappearing act. He was 14 years old and obsessed with magic, spending much of his free time in or around Tannen's Magic Store, on Times Square, where sleight-of-hand masters regularly gathered to show off tricks and to gossip. Diaconis vanished from his regular life, dropping out of school and cutting ties with his family. It was this search for the hidden workings of magic that led Diaconis to math. This month the magician-turned-mathematician reveals some secrets in a new book, Magical Mathematics: The Mathematical Ideas That Animate Great Magic Tricks (Princeton University Press). The audience Diaconis imagined as he wrote the new book is his own teenage self. He long ago gave up performing magic, but his background doing card tricks has inspired his most innovative scholarship. Then he stumbled upon a book in the Stanford library that changed his mind. That was in 1990.

Math tips from Maths Insider photo © 2007 Herman Yung | more info (via: Wylio) Perfect hair, perfect teeth, perfect nails, perfect parents. Pah! There’s no such thing! As much as you try to be the perfect parent and raise the perfect child, you’ll always fall short! If you want advice on how to get your child to go to bed early; get them to watch less TV; always tell the truth or call if they’re going to be late; then you’ve come to the wrong website! However, if you want advice on how to correct some common mistakes in relation to your child’s maths learning, then read on (and worry about the early bedtime tomorrow!) Are you making these 5 mistakes? 1) Being negative about maths Do you hate math? Don’t say:“I was no good at math, It’s too hard-go ask your mum/dad.”Instead say:“Math can be hard but let’s see if we can work this out together first before asking for help” 2) Not praising every maths achievement If your kid finds maths easy, we often take their maths ability for granted and fail to praise them.

Graphing Inequalities « Zero-Knowledge Proofs November 3, 2011 by John Scammell Last week, I mentioned to a group of teachers that I had never come up with a good way to teach kids where to shade when graphing an inequality. Vicky from one of our local high schools shared her method with me. Vicky gives her students an inequality like She asks them to each find two coordinates that satisfy the inequality, and then plot them on a giant grid at the front of the room. From this graph, it becomes pretty obvious that there is a line involved, and which side of the line we should shade. We could extend this method to quadratic inequalities. , we could ask students to find ordered pairs that satisfy the inequality, and plot them on a grid at the front. Students could then have conversations about which of the shading should include the boundary, and which should not, and how to deal with that. Like this: Like Loading...

Looking at new ways to learn math, science | SignOnSanDiego.com One way to learn projective geometry is to sit in a classroom and memorize Whitehead’s axiom and ternary relations. Another is to go out on a wide swath of grass and use Alberti’s window to study giant parabolas. The latter is the manner preferred by Ricardo Nemirovsky, a professor of mathematics education at San Diego State University and director of the Center for Research in Mathematics and Science Education, a joint program involving SDSU and the University of California San Diego. About the program The Mathematics and Science Education Ph.D. program operated jointly by SDSU and UCSD. • Began in 1993 • Currently 16 students: 14 math education & 2 science education • Research intensive, full-time program • Admissions requirements: master’s degree in math, biology, or physics or master’s degree in math education and with math courses during Ph.D. • Interdisciplinary program of study • Stipends for 2011-12 are $20,000 plus tuition at both campuses is covered. Contact us

Weighing the world In the late 18th century knowing the density of the Earth was a crucial, but missing, piece in a puzzle. Not only could that knowledge provide an insight in what was at the centre of the Earth, it could also provide the actual densities of every other body in the solar system - at this time only relative densities were known. This was important in working out whether they were rocky worlds like the Earth or predominately gassy planets. Earlier, in the 17th century, Sir Isaac Newton had previously mulled over the possibility of using a mountain to test his theory of gravitational attraction. The idea went that if you put a pendulum near enough to a large mass – like a mountain – the deflection of the pendulum caused by the gravitational pull of the mountain might be enough to measure. The notion was picked up again by Astronomer Royal, Nevil Maskelyne in 1774 when he headed to Scotland to weigh the world. Here is a summary of what they were doing: Newton's law of gravitation says that: