Bob Thurman says we can be Buddhas 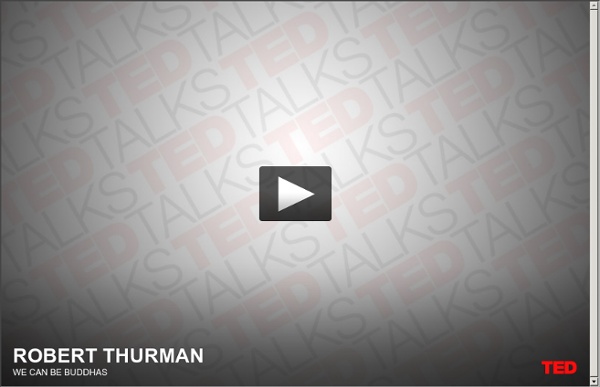 10 things science (and Buddhism) says will make you happy I’m a science geek as well as a Buddhist geek, and recently when I was leading a retreat on how to bring more joy into our lives I found myself making a lot of references to an article published in Yes magazine, which touched on ten things that have been shown by science to make us happier. It seemed natural to draw upon the article because so much of the research that was described resonated with Buddhist teachings. So I thought it would be interesting to take the main points of the article and flesh them out with a little Buddhism. 1. Be generous“Make altruism and giving part of your life, and be purposeful about it,” Yes magazine says. “Researcher Elizabeth Dunn found that those who spend money on others reported much greater happiness than those who spend it on themselves.” And in fact Buddhism has always emphasized the practice of dana, or giving. “And which are the three factors of the donor? 2. This of course is an example of another fundamental Buddhist practice — mindfulness. 3.

Lojong - Wikipedia, the free encyclopedia - StumbleUpon Lojong (Tib. བློ་སྦྱོང་,Wylie: blo sbyong) is a mind training practice in the Tibetan Buddhist tradition based on a set of aphorisms formulated in Tibet in the 12th century by Geshe Chekhawa. The practice involves refining and purifying one's motivations and attitudes. The fifty-nine or so slogans that form the root text of the mind training practice are designed as a set of antidotes to undesired mental habits that cause suffering. Prominent teachers who have popularized this practice in the West include Pema Chodron,[1] Ken McLeod, Alan Wallace, Chogyam Trungpa, Sogyal Rinpoche, Geshe Kelsang Gyatso, and the 14th Dalai Lama.[2] History of the practice[edit] Atiśa journeyed to Sumatra and studied with Dharmarakṣita for twelve years. A story is told that Atiśa heard that the inhabitants of Tibet were very pleasant and easy to get along with. The aphorisms on mind training in their present form were composed by Chekawa Yeshe Dorje (1101–1175 CE). The Root Text[edit] Slogan 1. 1. 2. 3. 4.

Psalms of the Early Buddhists: I. Psalms of the Sisters. 'I laughed. I rose. I was glad the long day was before me.'OLIVE SCHREINER. London PUBLISHED FOR THE PALI TEXT SOCIETY BY HENRY FROWDE OXFORD UNIVERSITY PRESS WAREHOUSE, AMEN CORNER, E.C. 1909 (In the Pali names pronounce the vowels as in Italian, but the unaccented a like u in nut. BOOK titles are necessarily brief. No one, not even, I imagine, a pious Buddhist, believes that these verses contain the ipsissima verba of those members of the Order to whom they are ascribed, or that these notable adherents conversed in Pali ślokas. The poems or verses so preserved to us are included in the Fifth Group of the second of the Three Pitakas (the Sutta-Pitaka) in the Pali Canon–the Group entitled Short: Khud'dăkă-Nikāya–and ranged after the Four Nikāyas often quoted in the following pages: Dīgha, Majjhima, Saŋyutt'a, Angutt'ără. This indeed has been the case in Dr. About 80 B. Now, the Commentator's explanations of episode and speaker are, it is true, legends woven out of legends. and

Guest Voices: The Buddha wasnt a Buddhist - On Faith at washingtonpost.com By Dzogchen Ponlop RinpocheTibetan Buddhist teacher If we want to be free of the pain we inflict on ourselves and each other — in other words, if we want to be happy — then we have to learn to think for ourselves. We need to be responsible for ourselves and examine anything that claims to be the truth. That’s what the Buddha did long ago to free himself from his own discontent and persistent doubts about what he heard, day-after-day, from his parents, teachers and the palace priests. Although he was a prince born into a wealthy and powerful family, the young Siddhartha often just wanted to get away from it all. There are many definitions of religion. If you search “world religions,” you’ll find “Buddhism” on every list. What Buddhism is, at this point, is certainly out of the Buddha’s hands. At the start of his own spiritual quest, Prince Siddhartha left his royal home, along with its many luxuries and privileges. Where do we find this truth?

Mind in Indian Buddhist Philosophy 1. History of the Issue Buddhist conceptions of mind evolved from early attempts to offer a systematic account of human experience as described in the large body of discourses attributed to the Buddha. The Buddha offered an account of the human individual as a composite of various psychological and physical elements that challenged the prevailing philosophical views, dominated by the Upaniṣadic idea of an enduring, substantive self (ātman). This aggregated view of persons became the object of early and extensive scholastic debates as Buddhists sought to explain how we come to mistakenly apprehend an unchanging and enduring self in a stream of causally interconnected phenomena. 1.1 The Not-Self Doctrine In one of his earlier discourses, the Buddha declares that we ought to regard any form of sensation and consciousness, whether “past, future, or present; internal or external; manifest or subtle...as it actually is...: ‘This is not mine. 2. 2.1 The Three Marks of Existence 1. 2. 3. Form.

Nine Essential Qualities of Mindfulness Meditation is one aspect of mindfulness Most people these days are stressed out by the fast pace of life, economy, and worries about the future. In a recent survey, conducted in the UK, a whopping 86 percent agreed that "people would be much happier and healthier if they knew how to slow down and live in the moment" (Mental Health Foundation, 2010). Mindfulness is a mind-body medicine practice, based on ancient Zen Buddhist meditation techniques, that was popularized by Jon Kabat-Zinn, a researcher at the University of Massachusetts Medical School. While most people seem to think that mindfulness is a good thing, many people are confused about what exactly mindfulness is. The beauty of the present moment Focus on the Present Moment —When your thoughts get lost in thinking about the past or worrying about the future, you bring them back to what you are experiencing right now. Connection —You feel connected to all living things and nature in being part of a larger whole. About The Author

A Bite of Buddhism | Psychology Today - StumbleUpon The four sublime mental states are qualities of mind that we cultivate in order to alleviate the suffering we experience in everyday life and to feel more connected to others—and the worries and fears we all share. In the language of the Buddha (Pali), they are called the brahma viharas , which means "the dwelling place of awakened beings." The good news for us unawakened beings is that it's easy to begin cultivating the brahma viharas . Indeed, they are an integral part of other religious, spiritual, and humanistic traditions. I present them here with a distinctly Buddhist "flavor." Metta . I like to think of metta as the simple act of well-wishing. Sylvia once said that she practices metta by just looking at a person and silently saying, "I love you." Karuna . The Vietnamese Zen master, Thich Nhat Hanh, helped me learn to cultivate compassion for myself. Mudita . Just as metta is an antidote for our judgmental tendencies, mudita is the perfect antidote for envy. Upekkha .

Zen Buddhism | Thematic Essay | Heilbrunn Timeline of Art History | The Metropolitan Museum of Art - StumbleUpon The essential element of Zen Buddhism is found in its name, for Zen means "meditation." Zen teaches that enlightenment is achieved through the profound realization that one is already an enlightened being. This awakening can happen gradually or in a flash of insight (as emphasized by the Soto and Rinzai schools, respectively). Zen traces its origins to India, but it was formalized in China. Today, ink monochrome painting is the art form most closely associated with Zen Buddhism. Zen Buddhism's emphasis on simplicity and the importance of the natural world generated a distinctive aesthetic, which is expressed by the terms wabi and sabi.

Buddhism Vaults : Dalai Lamas Heart Sutra Talk, May 2001, SF Bay Area, California, Day 1 of 3. by Dave Evans - StumbleUpon Day 2Day 3 Introduction Today I was fortunate enough to sneak out of work for a few hours to hear His Holiness the Dalai Lama began a lecture on the Heart Sutra. This is a three day class and I'm going to sneak out of some work tomorrow and Attend Saturday during the day as well. I thought I'd share some of what he said (as interpreted through my notes) with everyone. Please forgive my spelling, my crutch... er, spell checker is not working currently. Tickets for the three day class were $150. His Holiness started this morning talking about the diversity of religions and then even the diversity of views within buddhism. I want to point out that these are just my notes of H.H.' I missed some of the afternoon session, couldn't sneak out of work for the whole thing, but I'll summarize as much detail as I have. The shoreline stage was decorated with a large backdrop picture of the palace in Lhasa, with a small decorated throne like chair in front for the fourteenth Dalai Lama to sit on.