Share if You Think Every School Should Have a Year-Round Gardening Program! A few years ago the children at our school grew, harvested and, ultimately, ate a giant, two-pound carrot. 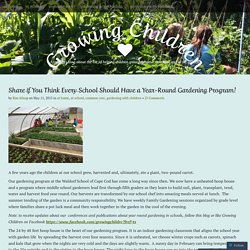 Our gardening program at the Waldorf School of Cape Cod has come a long way since then. We now have a unheated hoop house and a program where middle school gardeners lead first through fifth graders as they learn to build soil, plant, transplant, tend, water and harvest food year round. Our harvests are transformed by our school chef into amazing meals served at lunch. The summer tending of the garden is a community responsibility. We have weekly Family Gardening sessions organized by grade level where families share a pot luck meal and then work together in the garden in the cool of the evening. Note: to receive updates about our conferences and publications about year round gardening in schools, follow this blog or like Growing Children on Facebook The 24 by 48 feet hoop house is the heart of our gardening program. 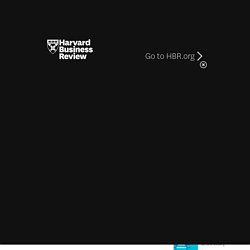 I think you remember our three finalists: One had built his company from a single store to more than 800 locations, 4,000 employees, and $600 million in annual revenue, and he didn’t have a college degree. Another hadn’t been ready to leave the private-equity world when we first contacted him, but circumstances changed his mind and now he’s 110% committed to the idea. The third had tremendous marketing and management experience, with fabulous networks that might help Opportunity get to a new level. None come from the nonprofit sector, so we wanted to craft the best possible evaluation for them. Thanks in part to your comments, we came up with a great approach for making our decision: We created three role-playing scenarios to see how our candidates would perform as CEO.

The three-part final interview went like this: Bill Morgenstern. Bill Morgenstern "has a remarkable track record of accomplishments as an entrepreneur, senior executive and servant leader. 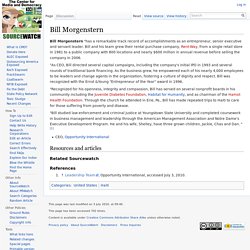 Bill and his team grew their rental purchase company, Rent-Way, from a single retail store in 1981 to a public company with 800 locations and nearly $600 million in annual revenue before selling the company in 2006. "As CEO, Bill directed several capital campaigns, including the company’s initial IPO in 1993 and several rounds of traditional bank financing. As the business grew, he empowered each of his nearly 4,000 employees to be leaders and change agents in the organization, fostering a culture of dignity and respect. Bill was recognized with the Ernst &Young "Entrepreneur of the Year" award in 1996.

"Recognized for his openness, integrity and compassion, Bill has served on several nonprofit boards in his community including the Juvenile Diabetes Foundation, Habitat for Humanity, and as chairman of the Hamot Health Foundation. CEO, Opportunity International. 84-Year-Old Holocaust Survivor Says Running Saved Her Life. Sylvia Weiner has rarely missed a day of running in the last 50 years. 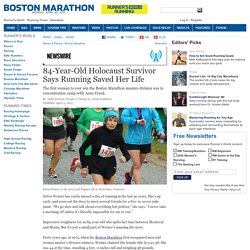 She’s up early, and soon out the door to meet several friends for a five- to seven-mile jaunt. “We go slow and talk about everything but politics,” she says. Good Citizen. Neglected Horse Makes A Miraculous Recovery. Pittsburgh-area teen with terminal cancer defies odds, retires... "It's not supposed to be, but who cares, because it is," Devin's stepmother, Daneen Kowall said. 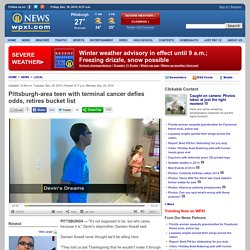 Daneen Kowall never thought we'd be sitting here. "They told us last Thanksgiving that he wouldn't make it through the holidays," said Kowall. Freshwater pearl and labradorite necklace by MissKooRoosBeads. 103-year-old man records his eighth ace, becomes oldest with hole-in-one. They say golf is a game you can play for a lifetime. 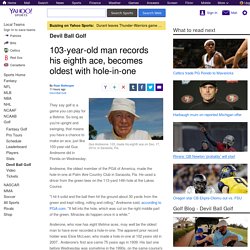 So long as you're upright and swinging, that means you have a chance to make an ace, just like 103-year-old Gus Andreone did in Florida on Wednesday. Andreone, the oldest member of the PGA of America, made the hole-in-one at Palm Aire Country Club in Sarasota, Fla. He used a driver from the green tees on the 113-yard 14th hole at the Lakes Course. "I hit it solid and the ball then hit the ground about 30 yards from the green and kept rolling, rolling and rolling," Andreone said, according to PGA.com.

"It fell into the hole, which was cut on the right middle part of the green. Matching Gardeners to Pantries Brings A Harvest of Caring. In his bountiful garden in New Jersey, Gary Oppenheimer was producing more than he could eat. 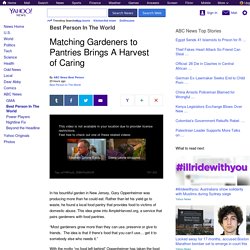 Rather than let his yield go to waste, he found a local food pantry that provides food to victims of domestic abuse. This idea grew into AmpleHarvest.org, a service that pairs gardeners with food pantries. “Most gardeners grow more than they can use, preserve or give to friends. The idea is that if there’s food that you can’t use… get it to somebody else who needs it.” With the motto “no food left behind” Oppenheimer has taken the food donation world by storm - signing up more than 7,000 food pantries across the country. Roberta Cevasco, director of the St. “People wouldn’t be able to afford this to go out to stores to buy it.

Related:  Articles That Caught My Eyes   -  Currently Looking Into   -  worth looking at   -  I am looking for a place, for my mind   -  looking for job   -  stoptherobbery.com   -  Binaural Beats « Get High Now (without drugs)   -  Feeling Bored and Undereducated? Try Any of These 400 Free Online Courses! | Geekosystem   -  How Can I Turn My Mess of Ideas Into Something Organized and Useful?   -  Why You Should Be Using an App Launcher (and How to Make It Do More Than Launch Apps)   -  Writing a CV/résumé   -  How to Develop Sherlock Holmes-Like Powers of Observation and Deduction   -  Education   -  Enterprise