50 Things You Need To Give Up Today!! 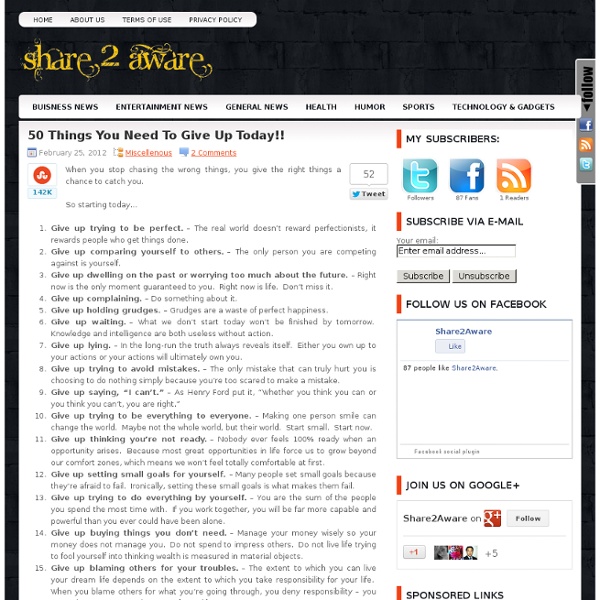 When you stop chasing the wrong things, you give the right things a chance to catch you. So starting today… Give up trying to be perfect. – The real world doesn’t reward perfectionists, it rewards people who get things done. Give up comparing yourself to others. – The only person you are competing against is yourself. Give up dwelling on the past or worrying too much about the future. – Right now is the only moment guaranteed to you. Right now is life. And remember, mistakes make us human, failures help us grow, hope keeps us going and love is the reason we’re alive. Source: Marcandangel

Flowers HD Desktop Wallpapers for Widescreen, High Definition, Mobile WallpapersWide.com Your display featuresAspect Ratio: StandardResolution: 1600 x 1200 Categories untitled What are Legitimate Reasons to Not Have Sex? Sometimes you have to say no to sex—even when you’re ready and rarin’ to go! These are seven good reasons not to have sex. My World and Welcome... Funny Pages: Handy Latin Phrases Non calor sed umor est qui nobis incommodat. It's not the heat, it's the humidity. Di! Ecce hora! 100 Incredible Lectures from the World's Top Scientists Posted on Thursday June 18, 2009 by Staff Writers By Sarah Russel Unless you’re enrolled at one of the best online colleges or are an elite member of the science and engineering inner circle, you’re probably left out of most of the exciting research explored by the world’s greatest scientists. But thanks to the Internet and the generosity of many universities and online colleges, you’ve now got access to the cutting edge theories and projects that are changing the world in this list below. If you’re looking for even more amazing lectures, check out our updated list for 2012 with more talks from great minds.

27 Science Fictions That Became Science Facts In 2012 We may never have our flying cars, but the future is here. From creating fully functioning artificial leaves to hacking the human brain, science made a lot of breakthroughs this year. 1. Quadriplegic Uses Her Mind to Control Her Robotic Arm At the University of Pittsburgh, the neurobiology department worked with 52-year-old Jan Scheuermann over the course of 13 weeks to create a robotic arm controlled only by the power of Scheuermann’s mind. The team implanted her with two 96-channel intracortical microelectrodes. Record-breaking NASA ion engine runs non-stop for 5 years Image © Image © NASA/JPL-Caltech Record-breaking NASA advanced ion propulsion engine, runs non-stop for more than 48,000 hours, or 5 and a half years. It is the longest test duration of any type of space propulsion system demonstration project ever.

Physicists To Test If Universe Is A Computer Simulation Physicists have devised a new experiment to test if the universe is a computer. A philosophical thought experiment has long held that it is more likely than not that we're living inside a machine. The theory basically goes that any civilisation which could evolve to a 'post-human' stage would almost certainly learn to run simulations on the scale of a universe. And that given the size of reality - billions of worlds, around billions of suns - it is fairly likely that if this is possible, it has already happened.

A review of Her by Ray Kurzweil (credit: Warner Brothers) Her, written, directed and produced by Spike Jonze, presents a nuanced love story between a man and his operating system. Although there are caveats I could (and will) mention about the details of the OS and how the lovers interact, the movie compellingly presents the core idea that a software program (an AI) can — will — be believably human and lovable.