Enabling and disabling services during start up in GNU/Linux. This guide shows you how to enable and disable services in Linux. 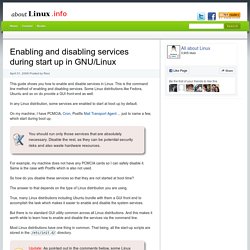 This is the command line method of enabling and disabling services. Some Linux distributions like Fedora, Ubuntu and so on do provide a GUI front-end as well. In any Linux distribution, some services are enabled to start at boot up by default. On my machine, I have PCMCIA, Cron, Postfix Mail Transport Agent ... just to name a few, which start during boot up. You should run only those services that are absolutely necessary.

For example, my machine does not have any PCMCIA cards so I can safely disable it. So how do you disable these services so that they are not started at boot time? The answer to that depends on the type of Linux distribution you are using. True, many Linux distributions including Ubuntu bundle with them a GUI front end to accomplish the task which makes it easier to enable and disable the system services. But there is no standard GUI utility common across all Linux distributions. How to Restart Services in Linux (with Step-by-Step Screenshots) How to monitor RedHat Enterprise Linux 5 or 6 using Microsoft System Center Operations Manager (SCOM) 2012 R2. Accessing UNIX and Linux Computers in Operations Manager. 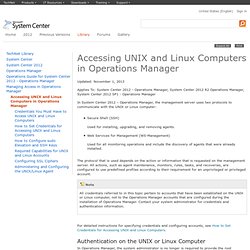 Credentials You Must Have to Access UNIX and Linux Computers. This topic describes how you use credentials to install, maintain, upgrade, and uninstall agents. 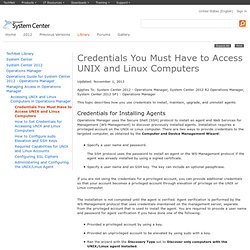 Credentials for Installing Agents Operations Manager uses the Secure Shell (SSH) protocol to install an agent and Web Services for Management (WS-Management) to discover previously installed agents. Installation requires a privileged account on the UNIX or Linux computer. There are two ways to provide credentials to the targeted computer, as obtained by the Computer and Device Management Wizard: Specify a user name and password.The SSH protocol uses the password to install an agent or the WS-Management protocol if the agent was already installed by using a signed certificate. If you are not using the credentials for a privileged account, you can provide additional credentials so that your account becomes a privileged account through elevation of privilege on the UNIX or Linux computer. The installation is not completed until the agent is verified. Specify a user name and a password. How to Set Credentials for Accessing UNIX and Linux Computers. 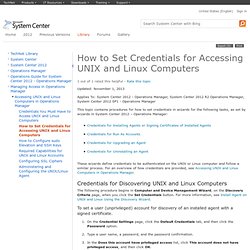 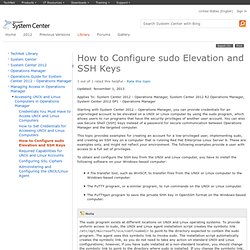 You can also use Secure Shell (SSH) keys instead of a password for secure communication between Operations Manager and the targeted computer. This topic provides examples for creating an account for a low-privileged user, implementing sudo, and creating an SSH key on a computer that is running Red Hat Enterprise Linux Server 6. These are examples only, and might not reflect your environment. Install Agent and Certificate on UNIX and Linux Computers Using the Command Line. Updated: November 1, 2013. 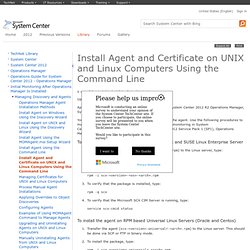 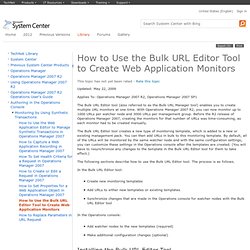 With Operations Manager 2007 R2, you can now monitor up to 1000 URLs per watcher node and 3000 URLs per management group. Before the R2 release of Operations Manager 2007, creating the monitors for that number of URLs was time-consuming, as each monitor had to be created manually. The Bulk URL Editor tool creates a new type of monitoring template, which is added to a new or existing management pack. You can then add URLs in bulk to this monitoring template. By default, all of the URLs will be monitored by the same watcher node and with the same configuration settings; you can customize these settings in the Operations console after the templates are created. The following sections describe how to use the Bulk URL Editor tool. 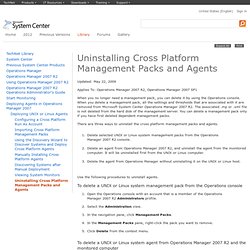 When you delete a management pack, all the settings and thresholds that are associated with it are removed from Microsoft System Center Operations Manager 2007 R2. The associated .mp or .xml file is not deleted from the hard disk of the management server. Linux Directory Structure Explained with diagram. Install Agent on UNIX and Linux Using the Discovery Wizard. Linux Agent install issue - Chandan Bharti's Blog. I tried discovering a linux box and deploying agent, But I see below error. 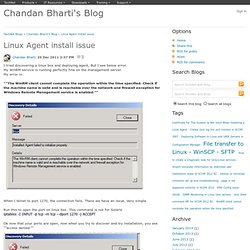 My WinRM service is running perfectly fine on the management server. My error is: “”The WinRM client cannot complete the operation within the time specified. Check if the machine name is valid and is reachable over the network and firewall exception for Windows Remote Management service is enabled.”” When I telnet to port 1270, the connection fails. Open Ports on Linux Systems. Opening Ports in a Linux Firewall This guide applies only to users of Linux based operating systems. 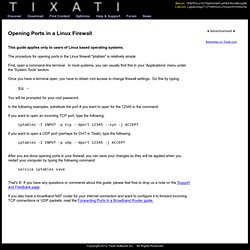 The procedure for opening ports in the Linux firewall "iptables" is relatively simple. First, open a command-line terminal. In most systems, you can usually find this in your 'Applications' menu under the 'System Tools' section. Once you have a terminal open, you have to obtain root access to change firewall settings. Su - You will be prompted for your root password. In the following examples, substitute the port # you want to open for the 12345 in the command. Deploying Unix/Linux Agents using OpsMgr 2012 - Kevin Holman's System Center Blog. Microsoft started including Unix and Linux monitoring in OpsMgr directly in OpsMgr 2007 R2, which shipped in 2009.

Some significant updates have been made to this for OpsMgr 2012. Primarily these updates are around: Highly available Monitoring via Resource Pools Sudo elevation support for using a low priv account with elevation rights for specific workflows. Ssh key authentication New wizards for discovery, agent upgrade, and agent uninstallation Additional Powershell cmdlets Performance and scalability improvements New monitoring templates for common monitoring tasks This article will cover the discovery, agent deployment, and monitoring configuration of a Linux server in OpsMgr 2012. Manually Installing Cross Platform Agents. Updated: May 22, 2009. Deploying UNIX or Linux Agents.

For many enterprises, this much anticipated functionality bridges the gap between disparate monitoring systems. Consolidating Unix and Windows servers into the same console provides a more holistic view into the health of your systems. The benefits of managing Windows and Unix servers with a single monitoring platform are many. Most notably, cost savings (licenses, support), consolidated alerting and availability reporting using the SCOM Data Warehouse. Problem Statement If reading this article and unsure if your management servers have the right updates or configuration, you’re in the right place. Appendix A - Cross Platform Operating System Package Dependencies.