NASA Computer Model Provides a New Portrait of Carbon Dioxide. An ultra-high-resolution NASA computer model has given scientists a stunning new look at how carbon dioxide in the atmosphere travels around the globe. 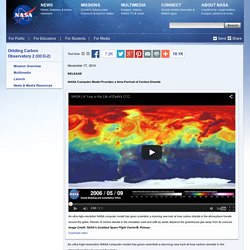 The work of the Wildfire Research Team with regards to fire radiative power (FRP), and the algorithms and data products resulting from it, have had major instrumental impacts on European capacity to map, quantify and monitor global wildfires and their effects. 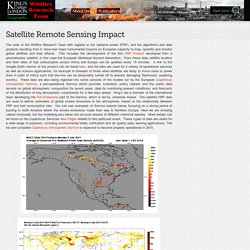 This includes the development of the first FRP Product developed from a geostationary satellite, in this case the European Meteosat Second Generation. From these data, wildfire location and their rates of fuel consumption across Africa and Europe can be updated every 15 minutes. A link to the Google Earth version of the product can be found here, and the data are used for a variety of operational services as well as science applications, for example to forewarn of times when wildfires are likely to move close to power lines in parts of Africa such that the line can be temporarily turned off to prevent damaging ‘flashovers’ (sparking events). The picture at left shows the ESA Sentinel-3 carrying the SLSTR. MACC Project - Press Room. The examples below illustrate some of the services that MACC-II provides. 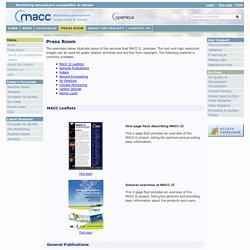 The text and high resolution images can be used for public relation activities and are free from copyright. The following material is currently available: MACC Leaflets General Publications. A 10-Year Endeavor: NASA's Aura and Climate Change. Nitrogen and oxygen make up nearly 99 percent of Earth's atmosphere. 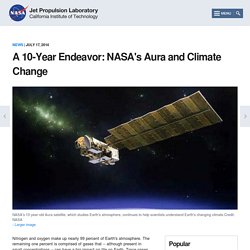 The remaining one percent is comprised of gases that -- although present in small concentrations -- can have a big impact on life on Earth. Trace gases called greenhouse gases warm the surface, making it habitable for humans, plants and animals. But these greenhouse gases, as well as clouds and tiny particles called aerosols in the atmosphere, also play vital roles in Earth's complex climate system. Home Page - Orbiting Carbon Observatory. Aerosol Optical Depth : Global Maps. Download a Quicktime animation of this dataset (5 MB) Tiny solid and liquid particles suspended in the atmosphere are called aerosols. 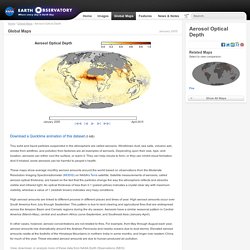 Windblown dust, sea salts, volcanic ash, smoke from wildfires, and pollution from factories are all examples of aerosols. Depending upon their size, type, and location, aerosols can either cool the surface, or warm it. They can help clouds to form, or they can inhibit cloud formation. And if inhaled, some aerosols can be harmful to people’s health. These maps show average monthly aerosol amounts around the world based on observations from the Moderate Resolution Imaging Spectroradiometer (MODIS) on NASA’s Terra satellite. High aerosol amounts are linked to different process in different places and times of year.

In other cases, however, aerosol concentrations are not related to fires. View, download, or analyze more of these data from NASA Earth Observations (NEO): The EOS Flagship. Aqua Earth-observing satellite mission. GMAO - Research. Animation 1. 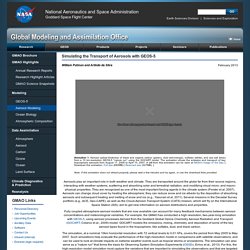 Aerosol optical thickness of black and organic carbon (green), dust (red-orange), sulfates (white), and sea salt (blue) from a 10 km resolution GEOS-5 "nature run" using the GOCART model. The animation shows the emission and transport of key tropospheric aerosols from August 17, 2006 to April 10, 2007. A still from this animation can be seen at NASA's Image of the Day. [ Download this animation: Full size (684MB) | Reduced size (327MB). ] Note: If this animation does not stream properly, please wait a few minutes and try again, or use the download links provided. Aerosols play an important role in both weather and climate. Fully coupled atmosphere-aerosol models that are now available can account for many feedback mechanisms between aerosol concentrations and meteorological variables. 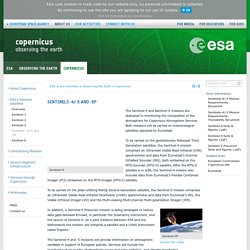 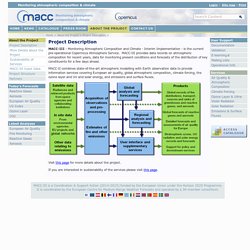 Visit this page for more details about the project. Aerosols: Tiny Particles, Big Impact : Feature Articles. A previous version of this article, written in 1999, is now archived as a PDF file. 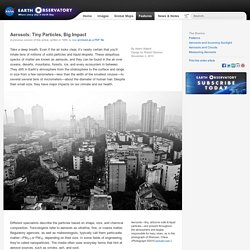 By Adam Voiland Design by Robert Simmon November 2, 2010 Take a deep breath. Even if the air looks clear, it’s nearly certain that you’ll inhale tens of millions of solid particles and liquid droplets. These ubiquitous specks of matter are known as aerosols, and they can be found in the air over oceans, deserts, mountains, forests, ice, and every ecosystem in between. They drift in Earth’s atmosphere from the stratosphere to the surface and range in size from a few nanometers—less than the width of the smallest viruses—to several several tens of micrometers—about the diameter of human hair.

Aerosols—tiny, airborne solid & liquid particles—are present throughout the atmosphere and largely responsible for hazy skies, as in this photograph of Shenzen, China. Different specialists describe the particles based on shape, size, and chemical composition. Aerosols / Space for our climate. Aerosols Tiny dust particles and droplets suspended in the atmosphere have a definite influence on our climate, but we are a long way from defining precisely the role that aerosols play. That they do have an effect was established more than a decade ago. Volcanic dust Mount Pinatubo devastated the Philippines when it erupted in 1991, forcing half a million people from their homes.

Atmosphere : All Images. Overview / Space for our climate. Atmosphere Overview Side-on from space, our atmosphere appears as a thin sliver of orange and blue. For all life on Earth, it functions as a combined life support system and protective shield. About GOSAT - GOSAT Project. The Greenhouse Gases Observing Satellite "IBUKI" (GOSAT) is the world's first spacecraft to measure the concentrations of carbon dioxide and methane, the two major greenhouse gases, from space (Figure 1). The spacecraft was launched successfully on January 23, 2009, and has been operating properly since then.

Through analyzing the GOSAT observational data, scientists will be able to ascertain the global distribution of carbon dioxide (CO2) and methane (CH4), and how the sources and sinks of these gases vary with seasons, years, and locations. These new findings will enhance scientific understanding on the causes of global warming. Also, they will serve as fundamental information for improving climate change prediction and establishing sound plans for mitigating global warming. The GOSAT Project is a joint effort of the Ministry of the Environment (MOE), the National Institute for Environmental Studies (NIES), and the Japan Aerospace Exploration Agency (JAXA) (Figure 2).

Introducing Sentinel-2 / Sentinel-2 / Copernicus. The Sentinels are a fleet of satellites designed specifically to deliver the wealth of data and imagery that are central to the European Commission’s Copernicus programme. This unique environmental monitoring programme is making a step change in the way we manage our environment, understand and tackle the effects of climate change and safeguard everyday lives.

Following the success of this first mission, the subsequent series of Meteosat satellites, ERS-1, ERS-2 and Envisat provided us with a wealth of valuable data about Earth, its climate and changing environment. It is crucial, however, that we continue to learn more about our planet if we are to understand the Earth system and its processes, especially within the context of global change. This will equip us better for predicting the effects a changing climate may bring. As our quest for knowledge continues to grow, so does our demand for accurate satellite data to be used for numerous practical applications for protecting and securing the environment. In addition, the Copernicus Sentinel missions, which form part of the Copernicus Space Component, will collect robust, long-term climate-relevant datasets.

Overview / Copernicus. Overview Observing our planet for a safer world Copernicus is the most ambitious Earth observation programme to date. Copernicus. Mission overview / Envisat. Mission overview Envisat soars into orbit Launched on 1 March 2002 on an Ariane-5 rocket from Europe’s spaceport in French Guyana, Envisat was the largest Earth observation spacecraft ever built. The eight-tonne satellite orbited Earth more than 50 000 times over 10 years – twice its planned lifetime. The mission delivered thousands of images and a wealth of data used to study the workings of the Earth system, including insights into factors contributing to climate change. Latest EU Sentinel satellite to track global food crops - BBC News. Space in Videos - 2013 - 12 - Sentinel-3 over ice. Introduction. ESA’s next Earth Explorer satellite / Press Releases / For Media / ESA.

Scientists Get a Real "Rise" Out of Breakthroughs in How We Understand Changes in Sea Level For the first time, researchers have the tools and expertise to understand the rate at which sea level is changing and the mechanisms that drive that change. Image Left:Oceans change. Beyond merely the sloshing of waves that we all recognize along the beaches of the world, sea level describes a complex array of conditions, from chemistry to temperature to changes in the shape of the basins that hold the world's water. In this visualization, we look at changes in sea level measured from space using data from the TOPEX/Poseidon and Jason satellites. Click here to view this .mpg animation. Sea levels rise and fall as oceans warm and cool and as ice on land grows and shrinks.

Image Right:Sea surface temperature plays a vital role in the behavior of the Earth's climate and weather. According to Dr. The latest sea level research conducted by Dr. Related Links: Assessment of global megatrends — an update. Table of contents Most of these interactions are intimately linked and set to unfold over decades. Balancing the sea-level budget / Space for our climate. Is Europe an underestimated sink for carbon dioxide? Join the virtual classroom / Space for our climate. ESA's Climate Change Initiative (CCI) / Space for our climate. GCOS: About GCOS. Www.esa-cci.org. OSTM/Jason-2. 02 - Sentinel-1 constellation. SVS: Five-Year Global Temperature Anomalies from 1880 to 2013 (id 4135) SVS: Five-Year Global Temperature Anomalies from 1880 to 2013 (id 4135)