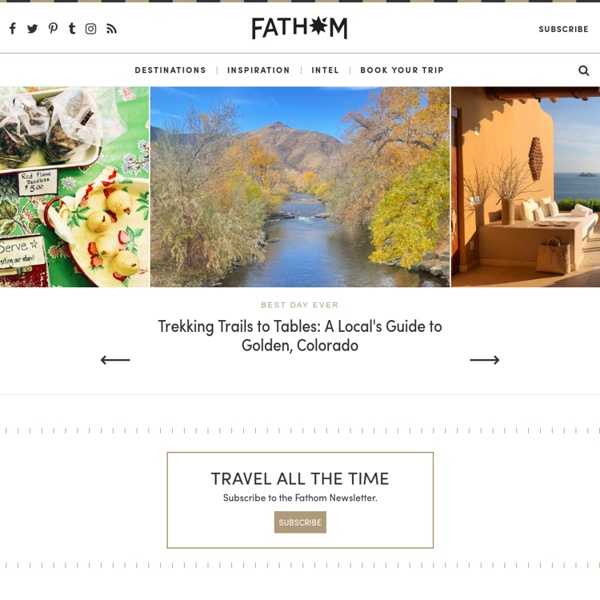 Project Run and Play 24 Best Travel Blogs and Websites When we compiled our original list of the 24 Best Travel Blogs and Websites, we thought we were creating an index that would be useful for readers and for ourselves. Little did we know it would become the most popular feature we've ever published. We're doing things a little differently in 2017, asking previous winners of the Blogs & Websites feature to nominate their favorite travel sites. The results give a refreshing glimpse into a tight-knit travel community filled with old pals and new voices. We're excited to present the 24 Best Travel Blogs and Websites of 2017: Off Assignment Recommended by Jungles in Paris (2015 and 2016 winner) Why they love it: It's a platform for reflective travel writing. Why we love it: The Letters to a Stranger section is equally heartwarming and haunting. Fresh Off the Grid Recommended by Sidetracked (2015) Carnets de Traverse Recommended by Classetouriste (2014, 2016) Scandinavia Standard Recommended by The Travelling Light (2015), 12hrs (2014, 2016) Travelfish

Links We Love: 1/10/2015 What we're clicking on this week (when we're not packing on the layers.) One day, I'd love to check into Houshi Ryokan. The traditional Japanese hotel is supposedly the oldest continually operating, family-run business. Meet Gluta, probably the world's happiest dog. Norges Bank, the central bank of Norway, held a competition to redesign kroner bank notes. From Jean-Michel Basquiat to Peggy Guggenheim, see where NYC's biggest players in the art world once lived. – Berit, editor One of my favorite reads this month: An exploration of life aboard the International Space Station. – Berit As part of Kate Spade New York's collection of space-themed accessories, we compiled a guide to far-out, super spacey, intergalatic phenomena as seen from Earth. – Jeralyn, editorial director The Charlie Hebdo tribute on the cover of next week's New Yorker magazine is incredibly moving. – Pavia THIS WEEK ON FATHOM: Mapping Out 2015 Bedroom details in Casa Claridge. Seven OCD buys to ward off travel bugs.

Rough Guides [:en]Follow the Food Festival: A Voyage into Small Town Portugal[:] [:en] As the mayor of the tiny Portuguese village told me in broken Spanish, (our only common language)-“If it doesn’t melt in your mouth, it’s not ham…” Those of you guys who know me by now, know I’m an absolute sucker for food. So, where in the world is Barrancos? Barrancos is a teeeeeny tiny 2,000 person village in the South of Portugal, right next to the Spanish border. except everyone spoke Portuguese. Now, I’ve never been a big hamconnoisseur. And ham I ate. Now what exactly is this mysterious ham, you might ask? I introduce you to my dear friend, the ham. We got really personal… Like, really personal. Now, behind every leg of ham, there is a man cutting it. His name is Alberto. But his heart… His heart was with the cheese. And that’s not all. After 2 hours of ham lovin’, sausage stuffin’, cheese munchin’ fun, came the dessert. Dulce de yema (more like dulce de YUMa) A really huge chocolate truffle ball And the classic. And then came the wine. Starting on the left. Port wine from Porto!