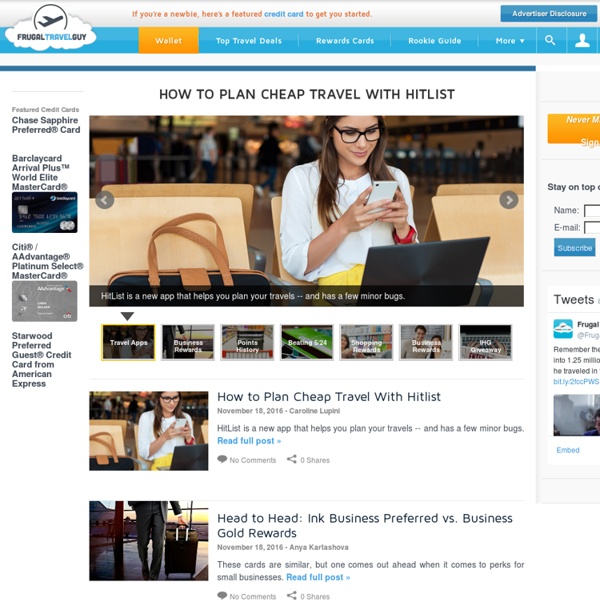 PointChaser - A Guide to Points, Miles and Free Travel Yes, You Can Get Paid To Travel (I Know Because I Did For 12 Years) If you were to Google “how to travel the world," the articles and resources you see first might give you the impression you have to quit your job to do it. But guess what? You definitely don’t have to quit your job in order to travel the world. You can get a job that pays you to travel. For more than 12 years, I traveled in my job as a tourism marketer for America’s largest department store retailer. My career allowed me to travel regularly across the United States and internationally to places like New Zealand, China, India, Brazil, Australia, Belgium, France, Argentina, and Switzerland on work assignments. Instead of trying to figure out ways to fit travel into a certain number of vacation days, hating the fact that you’re unable to quit your job or “escape the cubicle,” figure out ways to make the world your office. So, how do you become a successful tourism professional who gets paid to travel around the world? It’s not a matter of chance. 1. 2. 3. Related Reads: SHARE SHARES 4.1k

Apply for a Teacher Travel Grant This Summer Summer is the perfect time to research and apply for a teacher travel grant. The key is to look in the right places and write a compelling application. Then, once you win an award, you might find yourself kayaking the length of the Mississippi River while developing a river ecology unit. (At least, that’s what one teacher did with a Fund For Teachers grant.) To help you get started, here are some tips for writing winning proposals, a few inspiring articles, and a list of interesting travel grants that you might want to research or apply to this summer. The Best Places to Look Edutopia has covered travel grants in the past. Also, the Institute for International Education is an organization that anyone interested in educational travel should get to know. Grosvenor Teacher Fellowships From National Geographic: Each year, National Geographic and Lindblad Expeditions take K-12 geography teachers on expeditions around the world. Other Great Travel Grant Sources Writing an Awesome Application

10 Weird and Strange Foods from Iceland Iceland is a magical and fascinating travel destination and together with the normal choice of supermarket foods which are available you can also sample some of the more traditional and unusual Icelandic foods. These foods may seem weird and strange to us but in Iceland they are part of their national heritage. Most of these weird foods are traditionally eaten during the Icelandic winter festival of Thorrablot which takes place every year at the end of January and lasts a month. The festival is a Viking midwinter pagan celebration and the feast, called Thorramatur, consists of these unusual foods. 1. This fish is poisonous when eaten fresh so instead it is left to putrefy (rot) for 6 weeks, literally fermenting, and then cut and hung out to dry for another 4 months. 2. Made from sheep innards during the autumn this weird food comes in two forms, either as a black blood pudding or a white liver sausage. 3. 4. 5. 6. 7. 8. 9. 10.

20+ Of The Craziest Festivals Around The World That Bring People Together The world is full of fun and crazy people, and these festivals are solid proof. This list features some of the craziest, messiest or most colorful festivals and events ever, which have gathered millions of people from all around the world. From mass food fights, such as grape throwing festival in Australia and a tomato fight in Spain, to underwater music festival or baby jumping fiesta, there is something for everyone. Festivals can offer you extraordinary experiences and help you get to know a new country. If you are planning your holidays, be sure to check if the countries you're visiting are having any festivals. If you know of any festivals that absolutely must be seen to be believed, then add them to this list and vote for your favorites! Show 80 more Add Image Recent submissions to this list Pot Throwing Ceremony - Corfu, Greece Escobazos - Jarandilla De La Vera,spain Beer Floating Kaljakellunta - Finland Regional Rose Festival In Karlovo (bulgaria) Drag Image Select File Ooops!

Wonders of the World Various lists of the Wonders of the World have been compiled from antiquity to the present day, to catalogue the world's most spectacular natural wonders and manmade structures. The Seven Wonders of the Ancient World is the first known list of the most remarkable creations of classical antiquity; it was based on guidebooks popular among Hellenic sightseers and only includes works located around the Mediterranean rim. The number seven was chosen because the Greeks believed it represented perfection and plenty, and because it was the number of the five planets known anciently, plus the sun and moon.[1] Many similar lists have been made. Seven Wonders of the Ancient World The Victoria Falls contain the largest sheet of falling water in the world in terms of area The historian Herodotus (484 – ca. 425 BCE), and the scholar Callimachus of Cyrene (ca. 305 – 240 BCE) at the Museum of Alexandria, made early lists of seven wonders. The classic seven wonders were: Lists from other eras Recent lists

Here’s A Genius Map Of How To Drive Through Every State In Just 113 Hours As summer break looms upon us, you're wondering what to do with your spare time. All those warm days stuck in one place? No way! Averaging 55 mph with stops along the way, you'll be able to see all 48 contiguous states in just under 124 hours (or 113 without stops!). For the 6,813-mile drive, you'll start at South Berwick, Maine, and end in Taft, Montana. Imgur.comIf you've got the dough, plan your U.S. tour with a corporate jet. Using Von Workley's incredible calculations, you'd be cruising at 460 knots, retiring after 6,200 miles in just 11.7 hours, "and at fifteen over the speed limit," you'll navigate the 440 road miles in 6.3 hours. The total comes to 39 hours (or, 47 minutes per state). Now, say you're the President of the United States and you get this strange urge to visit all 50 U.S. With a "pair of souped-up fighters and a squadron of Apaches," the President can make the same route but twice as fast. The total comes to just 18 hours (or, 21 minutes per state). H/t: Data Pointed