10 places to move abroad and extend your life 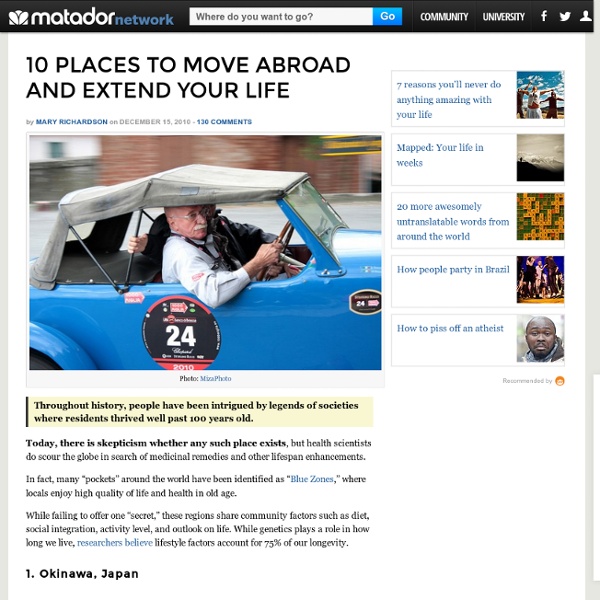 Throughout history, people have been intrigued by legends of societies where residents thrived well past 100 years old. Today, there is skepticism whether any such place exists, but health scientists do scour the globe in search of medicinal remedies and other lifespan enhancements. In fact, many “pockets” around the world have been identified as “Blue Zones,” where locals enjoy high quality of life and health in old age. While failing to offer one “secret,” these regions share community factors such as diet, social integration, activity level, and outlook on life. While genetics plays a role in how long we live, researchers believe lifestyle factors account for 75% of our longevity. 1. Japanese rank high in lifespan studies, but Okinawans boast exceptional health. Okinawan cuisine, Photo: pelican The Okinawa diet has been studied intensely. 2. Situated between Spain and France, this small principality of 84,000 people has one of the longest life expectancies in world. 3. 4. 5. 6. 7. 8. 9.

15 Amazing Castles from Around the Globe Although designed and built for the prominent purpose of defense, today the castles seem like somewhat unrealistic constructions straight from the fairytale world. From solid strongholds to oriental fortresses and highly decorative palaces, the castles are our connection to the past, where legends mix with history and reality blends with a fairyland. This fairytale castle is the historical seat of the Prussian Kings and German Emperors. Its origin dates back to the Middle Ages - it was built in the 11th century, then completely destroyed in 1423 and reconstructed in 1461.

Amazing Places To Experience Around The Globe (Part 1) 98 Flares Facebook 13 Twitter 15 Google+ 60 StumbleUpon 0 Pin It Share 10 10 98 Flares × Kayangan Lake, Coron islands, Palawan, Philippines Preachers Rock, Preikestolen, Norway Blue Caves – Zakynthos Island, Greece Cities of Color: 10 Vibrant, Colorful Cities of the World Cities of Color: 10 Vibrant, Colorful Cities of the World The most colorful cities around the world – There’s more to a city than just concrete, steel and hard work. The color of a city’s architecture and the creativity of its people can turn a dull, functional town into a thing of vibrant beauty. From the favelas of Rio de Janeiro to the Blue City of India and beyond, color is a core characteristic of some of the world’s most stunning cities. Join us to explore 10 of the most bright and colorful cities around the world today.

Beautiful Places to Visit - StumbleUpon The stunning Plitvice Lakes National Park lies in the Lika region of Croatia. The park is surrounded by the mountains Plješevica, Mala Kapela, and Medveđak, which are part of the Dinaric Alps. The 16 blue-green Plitvice Lakes, which are separated by natural dams of travertine, are situated on the Plitvice plateau. Waterfalls connect the lakes, and the tallest waterfall is Veliki Slap at 70 meters (230 feet) tall. The Plitvice lakes area boasts a large variety of interesting and colorful flora and fauna. Visitors can enjoy walking and hiking the many pathways and trails, or exploring the lakes by boat.

12 Tough Truths that Help You Grow As you look back on your life, you will often realize that many of the times you thought you were being rejected from something good, you were in fact being redirected to something better. You can’t control everything. Sometimes you just need to relax and have faith that things will work out. Let go a little and just let life happen. Because sometimes the truths you can’t change, end up changing you and helping you grow. Here are twelve such truths…

22 Incredible Photos of Faraway Places Thailand Chances are you already know Steve McCurry as the man who took one of the most iconic photos of our time. It was of a 12-year-old Afghan refugee girl who's piercing green eyes told us her harrowing story. 10 Wonders of the World You Don’t Know Our World While most of these wonders will be known to a few people, they are, on the whole, not as well known as the famous “seven wonders”. Despite that, each has a reason for being considered wonderful and deserves its spot on this list. The 20 Best Travel Websites on the Internet - Golden Book Traveler Update: Visit the 2012 version of The 20 Best Travel Websites on the Internet I hope that everyone who attended my SXSW Core Conversation panel on How to Make Money Traveling Around the World enjoyed the presentation. As promised, I have a listing of my top 20 favorite travel websites (in no particular order).