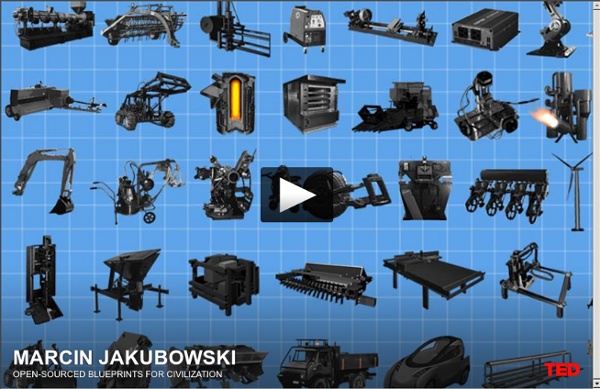 For the price of a TV you can start a FabLab This Christmas season you could buy a loved one an HDTV, a low end MacBook, or a suite of tools that enable them to create anything they can imagine. MIT Media Lab professor Neil Gershenfeld coined the term “FabLabs” to describe such a set of customization manufacturing tools (CNC mills, 3D printers, etc.) that would theoretically enable people to make almost anything. His vision was that these labs could be deployed to the inner city or developing world helping people fashion appropriate technology.

First, Let's Fire All the Managers Management is the least efficient activity in your organization. Think of the countless hours that team leaders, department heads, and vice presidents devote to supervising the work of others. Most managers are hardworking; the problem doesn’t lie with them. The inefficiency stems from a top-heavy management model that is both cumbersome and costly. Open Source Ecology My Blogspot: My Matrix Solutions Affiliate link: My Zeolite Affiliate link: Winning With Code Pleading Interview w/ David Williams: ­485695&cmd=apop The Right of Self-Determination is about Self-governing. Living systems Some scientists have proposed in the last few decades that a general living systems theory is required to explain the nature of life.[1] Such general theory, arising out of the ecological and biological sciences, attempts to map general principles for how all living systems work. Instead of examining phenomena by attempting to break things down into components, a general living systems theory explores phenomena in terms of dynamic patterns of the relationships of organisms with their environment.[2] Theory[edit]

Digital badges could help measure 21st-century skills Government, industry launch nationwide call to innovators to create ‘digital badges’ that can verify digital skills By Meris Stansbury, Online Editor Read more by Meris Stansbury TopCoder, an adviser for the MacArthur Foundation’s competition, currently has a badge system for its community members that validates skills and competencies. Stop Competing to Be the Best - Joan Magretta With Cyber Monday, the tablet wars kicked into full swing. Which one is the best? Is it the iPad? The Kindle? Who has the best technology? The best distribution?

True Fans True Fans [Edit] We are able to work on the GVCS full-time thanks to the generosity of your donations. Kevin Kelly's influential essay 1000 True Fans suggested a funding structure in which 1000 supporters each donate a small amount to sustain a project they really believe in.