The struggle of mental health. Alison Gopnik: What do babies think? What is going onin this baby's mind? 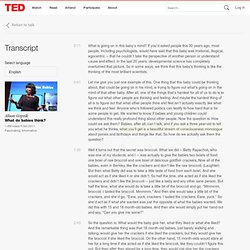 If you'd asked people this 30 years ago,most people, including psychologists,would have said that this baby was irrational,illogical, egocentric --that he couldn't take the perspective of another personor understand cause and effect.In the last 20 years,developmental science has completely overturned that picture.So in some ways,we think that this baby's thinkingis like the thinking of the most brilliant scientists. Well it turns out that the secret was broccoli.What we did -- Betty Rapacholi, who was one of my students, and I --was actually to give the babies two bowls of food:one bowl of raw broccoliand one bowl of delicious goldfish crackers.Now all of the babies, even in Berkley,like the crackers and don't like the raw broccoli.

So the question is: What would the baby give her,what they liked or what she liked? The question you might ask though is:Why do children learn so much? And how is it possible for them to learn so muchin such a short time? Jill Bolte Taylor: My stroke of insight. I grew up to study the brainbecause I have a brother who has been diagnosed with a brain disorder:schizophrenia. 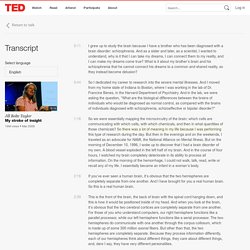 And as a sisterand later, as a scientist, I wanted to understand, whyis it that I can take my dreams, I can connectthem to my reality, and I can make my dreams come true? What is it about my brother's brain andhis schizophrenia that he cannot connect hisdreams to a common and shared reality, so theyinstead become delusion? So I dedicated my career to research into thesevere mental illnesses.

And I moved from my home stateof Indiana to Boston, where I was working inthe lab of Dr. Francine Benes, in the HarvardDepartment of Psychiatry. So we were essentially mapping the microcircuitryof the brain: which cells are communicating withwhich cells, with which chemicals, and then inwhat quantities of those chemicals? Excuse me. Our right human hemisphere is all about this present moment.It's all about "right here, right now.

" TED Talk Subtitles and Transcript. Humans have long held a fascinationfor the human brain.We chart it, we've described it,we've drawn it,we've mapped it.Now just like the physical maps of our worldthat have been highly influenced by technology --think Google Maps,think GPS --the same thing is happening for brain mappingthrough transformation. 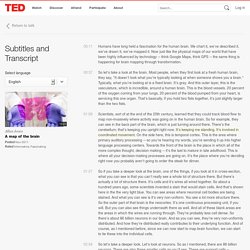 So let's take a look at the brain.Most people, when they first look at a fresh human brain,they say, "It doesn't look what you're typically looking atwhen someone shows you a brain. "Typically, what you're looking at is a fixed brain. It's gray.And this outer layer, this is the vasculature,which is incredible, around a human brain.This is the blood vessels.20 percent of the oxygencoming from your lungs,20 percent of the blood pumped from your heart,is servicing this one organ.That's basically, if you hold two fists together,it's just slightly larger than the two fists. (Laughter) So what can scientists learn about this data? Now what do those differences look like? Thanks. (Applause) Sarah-Jayne Blakemore: The mysterious workings of the adolescent brain.

Fifteen years ago, it was widely assumedthat the vast majority of brain developmenttakes place in the first few years of life.Back then, 15 years ago, we didn't have the abilityto look inside the living human brainand track development across the lifespan.In the past decade or so, mainly due to advancesin brain imaging technologysuch as magnetic resonance imaging, or MRI,neuroscientists have started to look inside the livinghuman brain of all ages, and to track changesin brain structure and brain function,so we use structural MRI if you'd like to take a snapshot,a photograph, at really high resolution of the insideof the living human brain, and we can ask questions like,how much gray matter does the brain contain,and how does that change with age? 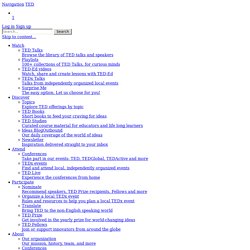 And we also use functional MRI, called fMRI,to take a video, a movie, of brain activitywhen participants are taking part in some kind of tasklike thinking or feeling or perceiving something. So for example, take risk-taking. Sarah-Jayne Blakemore: The mysterious workings of the adolescent brain.