School Libraries and Makerspaces: Can They Coexist? 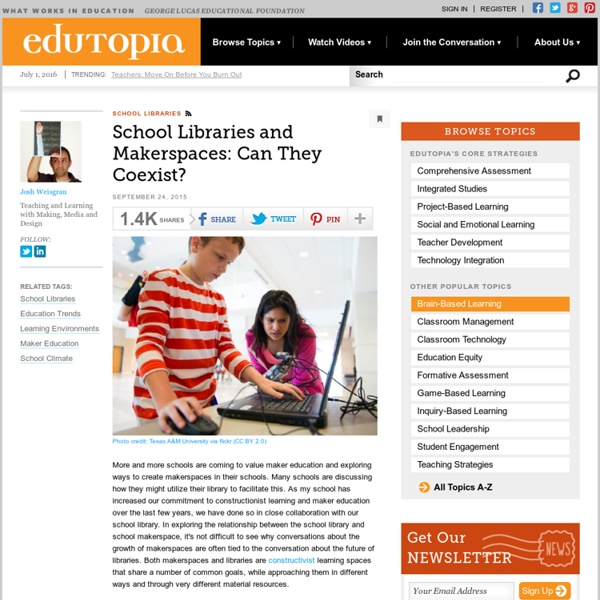 More and more schools are coming to value maker education and exploring ways to create makerspaces in their schools. Many schools are discussing how they might utilize their library to facilitate this. As my school has increased our commitment to constructionist learning and maker education over the last few years, we have done so in close collaboration with our school library. In exploring the relationship between the school library and school makerspace, it's not difficult to see why conversations about the growth of makerspaces are often tied to the conversation about the future of libraries. Both makerspaces and libraries are constructivist learning spaces that share a number of common goals, while approaching them in different ways and through very different material resources. Similar Yet Distinct Makerspaces and libraries are sites of informal learning. Libraries and makerspaces are inherently interdisciplinary spaces. Makerspaces and libraries are more than just resource closets.

Online referencing generator Access to information has never been easier for students as traditional print resources are supplemented with information from a plethora of World Wide Web sources. However, the ease of information access has developed a 'cut-and-paste' mentality to research, resulting in a rise in plagiarism among the student population. In order to minimise this problem, students need to be aware of the importance of acknowledging sources and, in particular, the conventions of referencing.

A Librarian's Guide to Makerspaces: 16 Resources "There were more than 135 million adult makers, more than half of the total adult population in America, in 2015." What is a makerspace? You’ve no doubt been hearing that word more than a few times over the past several years. Makerspaces, also called hackerspaces, hackspaces, and fablabs, are collaborative spaces where people gather to get creative with DIY projects, invent new ones, and share ideas. Since the first official makerspace convened six years ago in a library in upstate New York, libraries have remained an ideal setting for makerspace events across the country.

How to Turn Your School Into a Maker Haven One of the best ways for frustrated parents, students and teachers to convince school leaders that it’s time for a reboot is with amazing student work. An unconventional learning community of “makers” — people who like to figure out and fix problems with their hands — stands ready to demonstrate a hands-on learning style in which students engage problems that matter to them, taking agency and displaying creativity along the way. The Maker Movement is slowly infiltrating schools across the country with the help of dedicated educators and inspirational students proving with their creations that they can do incredible things when given a chance. “People are seeing through the eyes and the hands and the screens of children what’s possible, and it’s re-energizing progressive views of education,” said Gary Stager, co-author with Sylvia Libow Martinez of “Invent to Learn,” a book about the Maker Movement. “School is a big system,” Martinez said. “When you push it one way, it pushes back.”

Thing 31: Evidence Based Practice – Getting Started If school librarians can’t prove they make a difference, they may cease to exist.(Ross Todd – The Evidence-Based Manifesto for School Librarians SLJ, 2008) This first lesson in our latest Cool Tools track was inspired by conversations that started at a recent workshop by Jennifer LaGarde on annual reports and collecting data. And by the work of Ross Todd, Lyn Hay and Joyce Valenza (among many others!) on Evidence Based Practice. Some of you asked us to put together lessons that would give you time and resources to think about using Evidence Based Practice (EBP) to help improve your library’s program and help you show how you and your library’s services help students succeed.

Maker's Imagination The Beauty of Homemade Fun By Kristina Holzweiss, School Library Journal Librarian of the Year, 2015 In my next life I will come back as an archaeologist, a female Indiana Jones on the quest for the lost relic of an ancient civilization. For now, I am on the hunt for recyclable materials that my students can transform into works of art and engineering in our library makerspace. My own three young children (Tyler, 7; Riley, 5; and Lexy, 3) always know to ask Mommy before they toss anything into the trash. Soda cans, water bottles, cardboard, and packing materials are all resources that have the potential to become jewelry, flowers, cars, and forts. Some see trash, but I see treasure!

ACRL Report Shows Compelling Evidence of Library Contributions to Student Learning and Success A new report issued by ACRL, “Documented Library Contributions to Student Learning and Success: Building Evidence with Team-Based Assessment in Action Campus Projects,” shows compelling evidence for library contributions to student learning and success. The report focuses on dozens of projects conducted as part of the program Assessment in Action: Academic Libraries and Student Success (AiA) by teams that participated in the second year of the program, from April 2014 to June 2015. Synthesizing more than 60 individual project reports (fully searchable online) and using past findings from projects completed during the first year of the AiA program as context, the report identifies strong evidence of the positive contributions of academic libraries to student learning and success in four key areas: Students benefit from library instruction in their initial coursework.

Makerspaces in the Media Center For most people when they hear the words location, location, location they think real estate. I think of school library media centers. In almost all schools the media center occupies the largest amount of real estate on the campus. When Kids Engage In “Making,” Are They Learning Anything? Tuesday, May 12, 2015 A note to Brilliant readers: The following essay appears in the May issue of School Library Journal. The issue is devoted to making and maker spaces, and includes many interesting articles on the subject—I encourage you to check it out. My own contribution looks at how librarians, teachers, and parents can make sure that kids are learning while they make stuff.—Annie

ISTE 2015: Takeaway Tips for a Library Maker Space Maker station at the ISTE Librarians Digital Age Playground at the 2015 ISTE conference in Philadelphia. The maker movement was front and center at the 2015 ISTE conference—and that’s a good thing for me. After following maker initiatives with great interest for some time now, I have the opportunity to design a maker space this year for 6th–12th grade students at my school, Worcester (MA) Academy. A search of this year’s program at ISTE, held June 28 to July 1 in Philadelphia, using the term “constructivist learning/maker movement” resulted in 67 related sessions. The ISTE Librarians Network hosted a maker station at their Digital Age Playground and convened a panel on library maker spaces, featuring elementary and middle school librarians, a school administrator, and the coordinator of a public library maker initiative. Vendors and exhibitors demonstrated tools, lessons, and ideas for maker spaces.

Lego in libraries This page aims to bring together a whole ton of information on lego in libraries in one place. Why? Because I love lego. I remember playing with it as a child so it was particularly thrilling to see so many references to lego in public libraries in so many countries. Teachers in school libraries - what does the data tell us? Each year, the Wednesday of Library and Information Week is synonymous with National Simultaneous Storytime (NSS) – a time when schools, libraries and playgroups across Australia stop to share the same book at the same time. Hats off to the Australian Library and Information Association (ALIA) for choosing Jol and Kate Temple’s I Got This Hat, illustrated by Jon Foye for NSS 2016. It is a big week for school libraries with the announcement of the Children’s Book Council of Australia (CBCA) Shortlist last Friday. The shortlist containing the top Australian children’s books published in the past year forms the basis of reading activities in schools leading up to Children’s Book Week in August.

Showing my students how to add comments by margieteacheslibstudies Oct 21