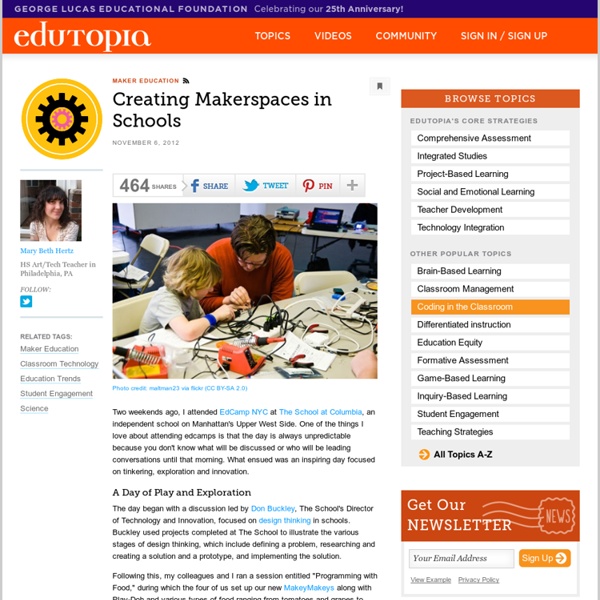 Two weekends ago, I attended EdCamp NYC at The School at Columbia, an independent school on Manhattan's Upper West Side. One of the things I love about attending edcamps is that the day is always unpredictable because you don't know what will be discussed or who will be leading conversations until that morning. What ensued was an inspiring day focused on tinkering, exploration and innovation. A Day of Play and Exploration The day began with a discussion led by Don Buckley, The School's Director of Technology and Innovation, focused on design thinking in schools. Buckley used projects completed at The School to illustrate the various stages of design thinking, which include defining a problem, researching and creating a solution and a prototype, and implementing the solution. The day ended with a session on 3D printing run by Don Buckley and Jaymes Dec. Design thinking, tinkering and exploring, designing and creating . . . Why Makerspaces? Bringing Makerspaces into Schools More on Makerspaces

Makerspaces, Year 1 Copy I started by looking for ways to tie into the month. Examples: 1. Design a haunted house (Oct.) 2. Design your own code (Dec. in honor of Hour of Code.) 3. AHS Makerspace (We are located in Brisbane, Australia, so have some preference for buying nearer home. These are sellers we have used or are considering. Please comment if you find other good sources.) 3D printer Makerbot Replicator 2

Makerspaces in Schools: Creating STEAM Connections Educators have discovered the power of makerspaces in schools to build students’ competencies and interest in science, technology, engineering and math. Guest blogger Diana Rendina, media specialist/school librarian at Stewart Middle Magnet School in Tampa, FL, describes how her school set up and uses a makerspace to support curricular goals and encourage STEAM skills. Our Makerspace Story

Elementary Library Makerspace Resources Collaborative Resources created with Mrs. J in the Library Elementary Librarians to Follow STEM Facilitators in Elementary Kids Are Using Minecraft To Design A More Sustainable World If you're going to communicate effectively with young people, it helps to do it in a language and format they understand. Like Minecraft, for instance. One hundred million people already play the Swedish-born game, and even those who haven't played can soon appreciate its build-it-with-blocks vernacular. UN-Habitat, the UN's agency for sustainable urban development, has a program to improve public space in developing world cities. It helps build new parks, squares, sports fields, and sidewalks, and promotes the value of public space to local people. Recently, it's used Minecraft to engage young people.

BarePaint - Greeting Card Kit - COM-11522 Description: Replacement: None. We are no longer carrying this conductive paint kit in our catalog. This page is for reference only. Bare Paint is the first non-toxic electrically conductive paint available to consumers today! This unique child-friendly material is designed for people of all ages to explore and learn about electronics with an inclusive, easy-to-use material. Bare’s Card Kit contains all the components you need to make three greeting cards using a Bare Paint Pen as shown in the tutorial below! The Common Core Meets the Maker Movement How do maker projects jibe with the requirements of the new Common Core? Educators were out in full force this past weekend, for the annual World Maker Faire held in New York City. Billed as the “greatest show (and tell) on earth,” a good chunk of the DIYers, citizen scientists, crafting experts, and tech enthusiasts in attendance were, thankfully, also educators. And in addition to working on their own projects, these educators were sharing ideas for how to use making in classrooms this fall. The Maker Education Initiative released an online resource library, a digital archive of sorts intended to help educators get started making in education.

The Makings of Maker Spaces, Part 1: Space for Creation, Not Just Consumption Maker spaces in libraries are the latest step in the evolving debate over what public libraries’ core mission is or should be. From collecting in an era of scarce resources to curation in an era of overabundant ones, some libraries are moving to incorporate cocreation: providing the tools to help patrons produce their own works of art or information and sometimes also collecting the results to share with other members of the ­community. Maker spaces promote learning through play; have the potential to demystify science, math, technology, and engineering; and encourage women and under­represented minorities to seek careers in those fields. They also tie in to the growing trend of indie artists in every medium—including books—who are bypassing traditional gatekeepers, taking advantage of new tools to produce professionally polished products, and going direct to the web to seek an audience. Libraries around the United States offer tools for patrons to learn by doingBy Lauren Britton

3D Printers Add a New Dimension to Classrooms When Ron Smith first saw a 3D printer in action, he knew the device belonged in his Engineering and Metal Fabrication program at Nestucca Junior/Senior High School in Cloverdale, Ore. The technology could guide students all the way through the manufacturing process — from concept to completion — and reward them with an object they could hold in their hands. But it wasn’t until Smith had an Afinia 3D printer in his classroom that he realized its value as an educational tool. Computer-assisted design (CAD) software by itself is great, he says.

Chibitronics – Mashing Craft and Electronics in an exciting Maker Opportunity For those who are fans of Manga or Anime, the term Chibi will be familiar as one used to describe super cute figures, usually with tiny bodies and huge heads. Chibi also is a Japanese slang term for tiny. Whether it is their tiny size or the super cute things you can create,the name ‘Chibitronics’ was a great choice of inventor, Jie Qi,. Chibitronics combine tiny sensors and electronic circuits with stickers, making it possible for anyone with imagination and some time to create interactive designs. Chibitronics are an exciting addition to a Makerspace. They consist of tiny circuits on stickers, which can be combined with copper tape or conductive paint to make almost anything interactive.

Why the Maker Movement Is Important to America’s Future I grew up in the age of Tinker Toys and Erector Sets. Both were meant to inspire me to be a maker instead of a consumer. My first real tool was a wood-burning engraver that had such a short chord it was almost impossible to use. 5 Makerspace Books You Need to Read There’s so many amazing books coming out now related to starting a school makerspace, and many of them are fantastic. But for this post, I want to take a look back and focus on the five books that had the biggest impact on me as I was planning and creating my makerspace at Stewart Middle Magnet School. This was back in late 2013/early 2014, when there wasn’t a ton of stuff out there that specifically focused on school makerspaces. Even without a direct focus on library makerspaces, these books still had a profound impact in shaping my thinking about creating an innovative, playful learning environment.

SUPPLEMENT: The Next Dimension: 3D Printers In his forward to The Invent To Learn Guide to 3D Printing in the Classroom: Recipes for Success, Gary Stager makes the case for this technology du jour to have a place in K-12 classrooms. 3D printers are hot. They’re so hot that even schools are buying them.