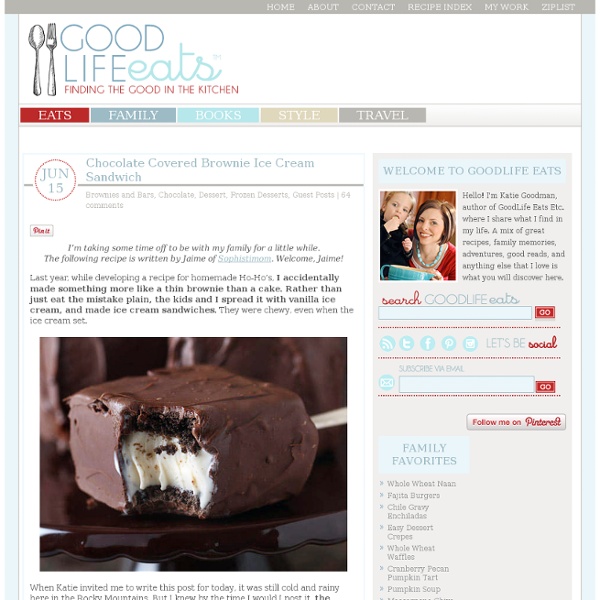 Chocolate Covered Brownie Ice Cream Sandwich Brownies and Bars, Chocolate, Dessert, Frozen Desserts, Guest Posts | 66 comments I’m taking some time off to be with my family for a little while. The following recipe is written by Jaime of Sophistimom. Welcome, Jaime! Last year, while developing a recipe for homemade Ho-Ho’s, I accidentally made something more like a thin brownie than a cake. When Katie invited me to write this post for today, it was still cold and rainy here in the Rocky Mountains. So I turned to my food magazines for a little help, as I often do. And that became my starting point. Martha’s ice cream bar had only one cookie layer, so I wanted to make it a little different—more like an ice cream sandwich. To make them easier to dip in chocolate, I inserted wooden Dixie cup spoons, and turned them on end to set. What about you? Need another Ice Cream Sandwich Recipe? About the Author:

Henri’s French Onion Soup I don’t know who Henri is, but I would like to kiss this man. Since going vegetarian (ahem, pescetarian), I realized that enjoying the things that I used to like, i.e. French onion soup, usually contains things like beef or chicken stock. I was totally disappointed and was hoping to find another substitute for a soup base.

Coffee Cake. Literally. This is a yummy cake for coffee lovers ONLY, man. Just read the title. It’s not cake you eat with your morning coffee. Lilyshop Mar 14 2012 Chocolate Peanut Butter Pretzels Ahhhhh I need to stop with the Pinterest. Yes, another late night Pinterest search yields this yummy peanut buttery-chocolately find. I altered the recipe a bit so see below. Yum! Caramel Sauce Recipe Method 1 First, before you begin, make sure you have everything ready to go - the cream and the butter next to the pan, ready to put in. Making caramel is a fast process that cannot wait for hunting around for ingredients. If you don't work fast, the sugar will burn. Safety first - make sure there are no children under foot and you may want to wear oven mitts; the caramelized sugar will be much hotter than boiling water.

Nutella Caramel Hazelnut Brownies I thought we were a little overdue for another NUTELLA recipe! What about you? I have been wanting to try a Nutella brownie recipe for a bit now, but it couldn’t be just any brownie, it had to be an oooey gooey over the top slap your momma kinda brownie. And after much drooling ehem contemplation, I think I got it! I decided on a layered brownie. Chocolate-Strawberry Truffle Pie You will fall in love with this pie. Are you in love yet? How about now?

banana bread crepe cake with butterscotch If this site could have a single prologue, it would go like this: It all started out so innocently. Because doesn’t it always? I wanted something simple but got carried away. A search for a lasagna I could love became a Mount Everest of a Lasagna Bolognese; a hankering for a great game-day snack became a mash-up of Welsh rarebit and pull-apart rye bread; and a hunt for a quiche that could serve a crowd became a 4 1/2 year vendetta until I triumphed over those 137 square inches of buttery flaky shell. Okay, I’m being a little dramatic. I’m likely scaring away people who just wanted something simple to cook (I promise, the next recipe will be so simple, you might, like me, weep and wonder where it’s been every rushed weekday night of your life thus far.)

Make Your Own Girl Scout Cookies Make Your Own Girl Scout Cookies, Sans The Artificial Ingredients Whether you want to avoid some of the highly-processed ingredients (like trans fats and palm oil) or you just can’t wait for the annual cookie sale, we’ve got some simple ways to make healthier versions of these classic treats. Why Make Your Own Though Girl Scout cookies boxes say “trans-fat free,” the term is officially defined by the FDA as a food that contains less than 0.5 grams of trans fat per serving, meaning some varieties — including uber-popular Thin Mints, Samoas and Tagalongs — still contain trace amounts of the fat. The giveaway: Look for “partially-hydrogenated” on the ingredient list. That ingredient list also contains palm oil and preservatives — your homemade ones will just taste better.

salted caramel mocha I didn’t do a dang thing to make this drink healthified. No natural sweeteners. No low-fat whipped cream. Knock You Naked Brownies Goodness. You have to try these. Here’s how it shakes out. Several weeks ago, I was gifted with a tin of brownies. To be specific: Killer Brownies from Dorothy Lane Market in Dayton, Ohio.