Making sense of the right

The terrorists are NOT who you think they are: - Index page. Roger Pearson (anthropologist) - Wikipedia. Pearson joined the British Army Queen's Royal Regiment in England, April 1945, and was commissioned in 1946 from British Indian Army Officers Training School Kakul, North-West Frontier Province (today the Pakistan Military Academy). 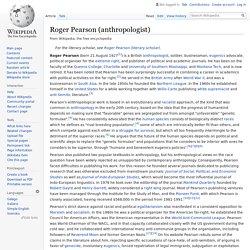 He served with the British Indian Army in Meerut, (1946) before the Partition of India, with the British Indian Division in the Occupation of Japan, and with the British Army in Singapore (1948), before returning to university in England. Pearson later directed various British-controlled companies in East Pakistan (now Bangladesh). In 1973 Pearson also founded the academic Journal of Indo-European Studies, which is today considered one of the major international journals for Indo-European studies. Pearson is also director of the Council for Social and Economics Studies, which owns the Scott-Townsend Publishers imprint (which has published most of his recent books), and General Editor of the Journal of Social, Political, and Economic Studies. 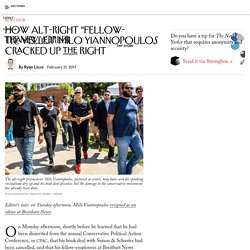 On Monday afternoon, shortly before he learned that he had been disinvited from the annual Conservative Political Action Conference, or CPAC, that his book deal with Simon & Schuster had been cancelled, and that his fellow-employees at Breitbart News were threatening to quit if he wasn’t fired, Milo Yiannopoulos calmly explained to me that he wasn’t a pedophile or an anti-Semite. Over the weekend, interviews in which he discussed underage sex and Jewish influence on the media and finance had circulated on social media. Medieval memes: The far right’s new fascination with the Middle Ages. UNTIL fairly recently, it was rare to find Americans who were passionate about both medieval history and contemporary politics. 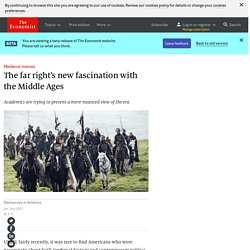 Barring the odd Christian conservative, medievalists tended to lean left: a Marxist grad student, say, mucking around in land ownership patterns to show how past inequalities gave birth to present ones, or an environmentalist activist, perhaps, fascinated with vegetable-dyed handspun clothing. But when Americans invoked historical events in politics, they tended to be more recent—the founding of the republic; the struggle against slavery and segregation; victory over Nazi Germany. This has changed. Dr. Benjamin Carson's Amazing Speech at the National Prayer Breakfast with Obama Present. Now you can come clean, Mr. Obama - - Articles - Jack Engelhard Jack Engelhard’s classic international bestselling novel Indecent Proposal, which later became a worldwide hit movie, has been republished to meet readers’ demands. 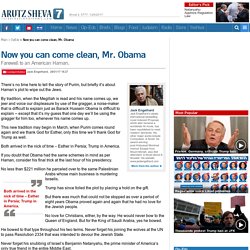 His other major works include Compulsive: A Novel, his award-winning post-Holocaust Montreal memoir Escape from Mount Moriah, plus Slot Attendant: A Novel About A Novelist. His website: www.jackengelhard.com There’s no time here to tell the story of Purim, but briefly it’s about Haman’s plot to wipe out the Jews. By tradition, when the Megillah is read and his name comes up, we jeer and voice our displeasure by use of the gragger, a noise-maker that is difficult to explain just as Barack Hussein Obama is difficult to explain -- except that it’s my guess that one day we’ll be using the gragger for him too, whenever his name comes up.

This new tradition may begin in March, when Purim comes round again and we thank God for Esther, only this time we’ll thank God for Trump as well. Pool Party’s Closed: A Timeline of The Right Stuff’s Meltdown – Angry White Men. Over the past month, a series of events took place that shocked the alt-right movement. 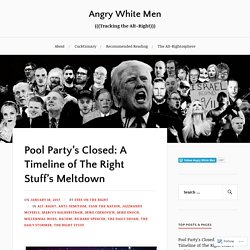 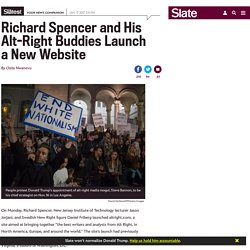 Safety Pins and Swastikas. The new issue of Jacobin is out now. 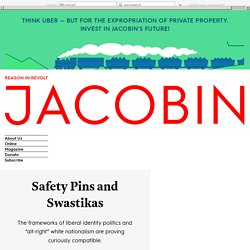 To mark its release, we’re offering discounted introductory subscriptions. If you had read in early 2016 about a National Policy Institute conference on the theme of “Identity Politics,” you might have assumed it was an innocent gathering of progressives. If you had attended, you would have been in for an unpleasant surprise. The National Policy Institute is an organization of white nationalists, overseen by neo-Nazi media darling Richard Spencer. The Alt-Lite Is Imploding. By Reinhard Wolff | redice.tv Something amazing is taking place. 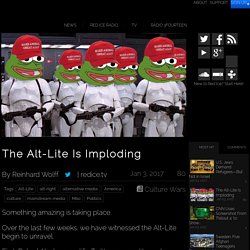 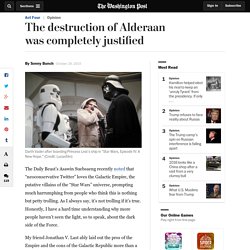 (Credit: Lucasfilm) How The American Academy Helped Create The Alt-Right. American academics are rightly alarmed by the ascendance of the alt-right and its entrenchment in American politics. 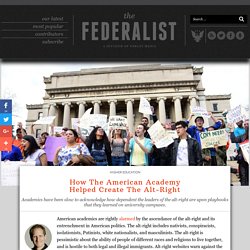 The alt-right includes nativists, conspiracists, isolationists, Putinists, white nationalists, and masculinists. The alt-right is pessimistic about the ability of people of different races and religions to live together, and is hostile to both legal and illegal immigrants. Alt-right websites warn against the dangers of miscegenation and criticize the pro-life movement as “dysgenic” because it encourages breeding by “the least intelligent and responsible” women. As a white nationalist, what do you do? A conversation with a scholar of America’s extreme right. Chip Berlet has spent the past four decades studying right-wing political movements as a writer, activist and scholar. Now retired, he worked for many years as a senior analyst at Political Research Associates, a think tank based in the Boston area. What Happened When I Trolled an Alt Right Hero. Pepe the Frog, a meme adopted by the alt right I'm a Muslim who spends a lot of time on Twitter.

Too much time, according to pretty much everyone. When I signed up in 2012 things on the site were fairly bland – you'd retweet the news, make some comments on the news, DM the Guardian to ask for an unpaid internship and maybe call a footballer a dickhead. Twitter, as you know, really isn't like that any more. And if you're not a straight white guy, a Trump supporting bot or a brand, you'll probably have experienced the darker, more vindictive side of Twitter. Alt-Right ‘Dark Enlightenment’ Group Seeks Campus Safe Space. Dark Enlightenment is recruiting on college campuses and trying to grab attention with stunts at Columbia and NYU—but leaders are touchy about revealing their real identities.

The fake book in Columbia University’s Butler Library seemed like a too-obvious clue from an old detective novel. How the alt-right became racist, Part 2: Long before Trump, white nationalists flocked to Ron Paul. While future neo-Nazi Richard Spencer was struggling with white nationalism in the world of political journalism, most of the people who would later comprise the alt-right’s online shock troops were involved in a different venture. They were fighting hard to make former Texas congressman Ron Paul the Republican presidential nominee, first in 2008 and again in 2012. It’s more than uncanny how many current alt-right leaders backed the former Texas congressman in his quixotic bids to stop GOP mainstream candidates John McCain and Mitt Romney. 'Alt-right': why the Guardian decided not to ban use of the term. Problem loading page. The Legacy of Progressivism. While Franklin Delano Roosevelt narrowly missed being Time Magazine’s "Man of the Century," there is no doubt that the man who prolonged the Great Depression and helped lay the groundwork for World War II looms large in the consciousness of statist journalists and historians.