Conspiracies to make sense of the world

Should you fact-check your grandma’s Facebook posts? – Lyz Lenz. My grandma believes that the President of the United States is trying to remove ‘In God We Trust’ from US currency. 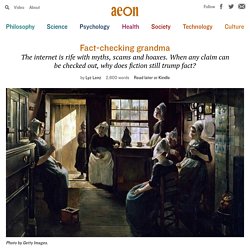 She has forwarded me three emails about the subject, each punctuated with a two-sentence commentary: ‘I can believe this! We live in a godless time!’ Like most patient grandchildren, I ignored the first two emails, chalking up her misplaced rage to the foibles of her age. After all, no one wants to fight with grandma. She is in her 80s and the daughter of Salvation Army missionaries, so she has Jesus on her side. L’évidence du complot : un défi à l’argumentation. Douter de tout pour ne plus douter du tout. Un complot mondial serait à l’origine de nombreuses théories du complot. 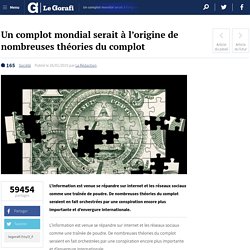 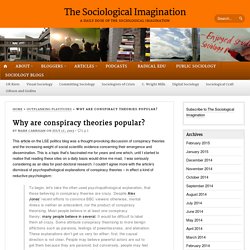 This is a topic that’s fascinated me for years and one which, until I started to realise that reading these sites on a daily basis would drive me mad, I was seriously considering as an idea for post-doctoral research. I couldn’t agree more with the article’s dismissal of psychopathological explanations of conspiracy theories – in effect a kind of reductive psychologism: To begin, let’s take the often used psychopathological explanation, that those believing in conspiracy theories are crazy.

Despite Alex Jones’ recent efforts to convince BBC viewers otherwise, mental illness is neither an antecedent, nor the product of conspiracy theorising. The Psychology of Conspiracy Theories. As a reader of the many essays here at World Mysteries.com, I have noticed that many of them deal with, at least in part, what are popularly known as conspiracy theories. 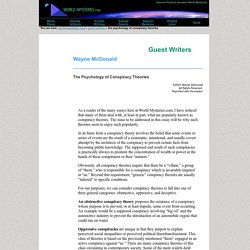 The issue to be addressed in this essay will be why such theories seem to enjoy such popularity. In its basic form a conspiracy theory involves the belief that some events or series of events are the result of a systematic, intentional, and usually covert attempt by the architects of the conspiracy to prevent certain facts from becoming public knowledge. The supposed end result of such conspiracies is practically always to promote the concentration of wealth or power in the hands of these conspirators or their “masters.”

Obviously, all conspiracy theories require that there be a “villain,” a group of “them,” who is responsible for a conspiracy which is invariably targeted at “us.” Beyond this requirement, “generic” conspiracy theories are usually “tailored” to specific conditions. Table 1 Notes 1. 2. 3. 4. 5. 6. The Sociology of Conspiracy Theories. Actually, there might be two studies worth doing in the near future, but I will focus on my main idea here. 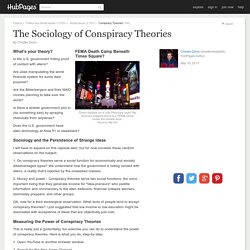 Who is more likely to believe a conspiracy theory and why? The twin questions suggest a survey of the general public on their beliefs and backgrounds. This would be a random sample survey, ideally, so every adult in the United States has a chance of being selected to participate. Alex Jones on the Bilderberg, BBC Sunday Politics (09Jun13) Apophenia makes unrelated things seem connected: Metaphors, paranormal beliefs, conspiracies, delusions. Conspiracy theories for moderate Muslims - MUSTAFA AKYOL. Since the cruel attacks in Paris that killed 17 innocent human beings, Turks are discussing what really happened and why. 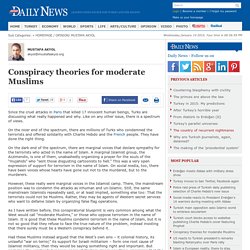 Like on any other issue, there is a spectrum of views. On the nicer end of the spectrum, there are millions of Turks who condemned the terrorists and offered solidarity with Charlie Hebdo and the French people. They have done the right thing. Who Falls for Conspiracy Theories? New research finds those on the political extremes are more susceptible than moderates. 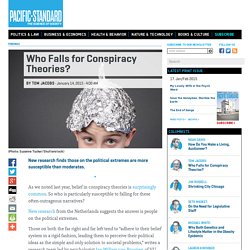 As we noted last year, belief in conspiracy theories is surprisingly common. A Guide to the Charlie Hebdo Conspiracy Theories. It's inevitable that in the wake of tragedy, sorrow and mourning give way to think pieces, handwringing, and a flock of deranged conspiracy theories. 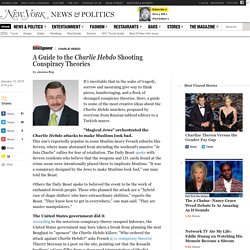 Here, a guide to some of the most creative ideas about the Charlie Hebdo murders, proposed by everyone from Russian tabloid editors to a Turkish mayor. "Magical Jews" orchestrated the Charlie Hebdo attacks to make Muslims look bad.This one's reportedly popular in some Muslim-heavy French suburbs like Sevren, where many abstained from attending the weekend's massive "Je Suis Charlie" rallies for fear of retaliation. The Daily Beast spoke with Sevren residents who believe that the weapons and I.D. cards found at the crime scene were intentionally placed there to implicate Muslims.