How the regenerative farming movement transformed Charles Massy's sheep station - ABC News. On a still autumn morning in 2016, Charles Massy walked up a hill above his farm to sit beside a favourite old snow gum. High up on the Monaro plateau that runs off the flank of Mount Kosciuszko he could see his homestead and the native brown grasses on his farm dusted with frost. There were swamp wallabies, frogs, previously unrecorded woodland birds.

"As a kid there we had no swamp wallabies or wallaroos," he said. It was a sign that the land was slowly returning to health after he had stopped using chemicals in 2000. Recently he had visited a friend who had regenerated his creek. Equity in health and wellbeing: Why does regional, rural and remote Australia matter? By Dr Robyn Vines FAPS, Chair, APS Regional, Rural and Remote Advisory Group and Adjunct Senior Research Fellow, Faculty of Medicine, Nursing and Health Sciences, Monash University The demographer Bernard Salt has stated that the unfolding story of our continent indicates that there are progressively becoming “two Australias” separated by a Great Divide stretching between Port Douglas in Far North Queensland and Eucla on the Great Australian Bight. 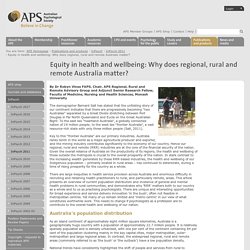 To the east lies “heartland Australia”, a globally connected nation of 19 million people; to the west lies “frontier Australia”, a vast resource-rich state with only three million people (Salt, 2011). Key to this “frontier Australia” are our primary industries. Australia ranks tenth in the world as a major agricultural producer and exporter, and the mining industry contributes significantly to the economy of our country. Hence our regional, rural and remote (RRR) industries are at the core of the financial security of the nation. Sustainable communities are doing it for themselves. Analysis Posted For many years the Australian media has been reporting on the death of the country town. 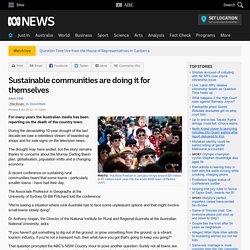 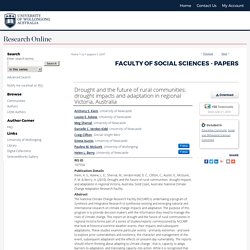 The purpose of this program is to provide decision-makers with the information they need to manage the risks of climate change. Rural health. Australians living in rural and remote areas tend to have shorter lives, higher levels of disease and injury and poorer access to and use of health services compared to people living in metropolitan areas. 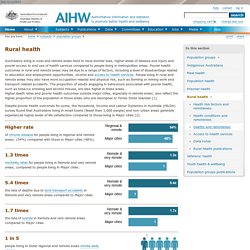 What is the future for Australia’s declining country towns? - On Line Opinion - 31/8/2000. During the twentieth century the application of advanced technology to farming and regionally based manufacturing has significantly reduced the demand for labour in rural Australia and the United States. 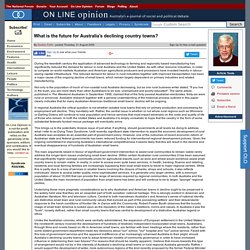 As with other resource industries, in order to compete on world markets Australian and American agricultural producers and processors have invested heavily in labour-saving capital infrastructure. The reduced demand for labour in rural industries together with improved transportation has been a major cause of the ongoing decline of small towns, which remain largely dependent on primary industries and related manufacturing. 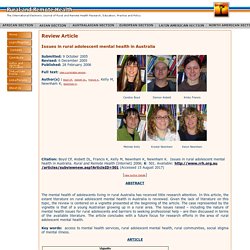 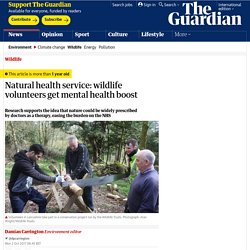 It advances the idea that nature could be widely prescribed by doctors as a therapy, which its supporters say would ease the burden on the NHS. Social determinants of health: Whose responsibility? - May - 2013 - Australian Journal of Rural Health. In Australia, when issues of health status are discussed, these discussions are often influenced by bigger issues affecting health outcomes including housing, education, transport, employment, income and access to health-care services. 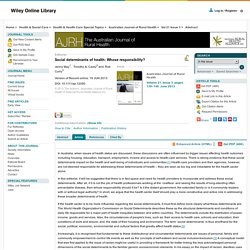 The National Centre for Farmer Health. Fact-sheet-05-health%20promtion%20in%20rural%20australia_0.pdf. Impact of rurality on health status. Health outcomes, as exemplified by higher rates of death, tend to be poorer outside major cities. 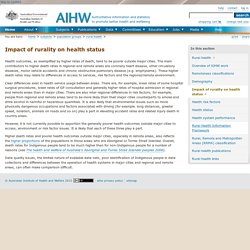 The main contributors to higher death rates in regional and remote areas are coronary heart disease, other circulatory diseases, motor vehicle accidents and chronic obstructive pulmonary disease (e.g. emphysema). These higher death rates may relate to differences in access to services, risk factors and the regional/remote environment. Clear differences exist in health service usage between areas. Transition Toolkit to Remote and Rural Practice. Caseload management refers to the ability to manage a number of clients, within a given amount of time and provide optimum services (this is the client specific aspect of workload management). 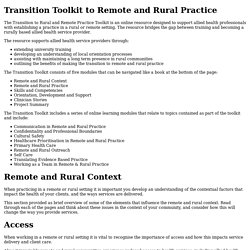 Rural and remote practice is one of the most challenging in terms of implementing caseload management strategies. However it also has excellent potential for change and innovation by health professionals who already demonstrate many new ways of looking at things, flexibility and non-traditional thinking. Both positive (supporting) and negative (impeding) factors must be considered when implementing caseload management strategies in a rural or remote context: Factors Influencing Caseload Management Sound caseload management can allow more effective use of the limited resources you have available allowing a greater scope of service provision across the continuum from preventative services to treatment services.

By 2031, the state’s population will near 8 million, with Melbourne to absorb most of the growth. New State Government data reveals that regional cities Geelong will grow to nearly 300,000, Bendigo to 145,000 and Ballarat to 140,000. Mitchell Shire, just north of Melbourne, containing Kilmore and Seymour, is the state’s fastest growing municipality and by 2031 will have 86,000 people — more than double its population in 2011. However, several places around the state will buck the trend and actually lose people. .

Driest start to winter on record has farmers worried, weather bureau forecasts no reprieve to dry spell - Rural News - ABC News. Drier weather may have made for a pleasant start to winter across southern Australia, but for grain growers, like South Australian Jordan Wilksch, it has been a source of much frustration. Grain grower Jordan Wilksch stands in a dry paddock on his Eyre Peninsula property in South Australia. A village of 70 folks might have the secret to living sustainably. Igiugig, Alaska. Population: 70. Yes, 70. Small town, ain't it? Also known as Igyaraq in the Central Alaskan Yup'ik language, Igiugig is a city that is going down an incredible path I hope more cities will follow.

The report, titled ‘New entrants to Australian agricultural industries – where are all the young farmers?’ Used Australian Bureau of Statistics (ABS) population census data from the eight censuses conducted between 1976 to 2011 to examine the current demographic structure of the Australian farmer population. Living in a woodland wonderland: The rise of the tree house. Image copyright Tom Chudleigh.