25 Insights on Becoming a Better Writer 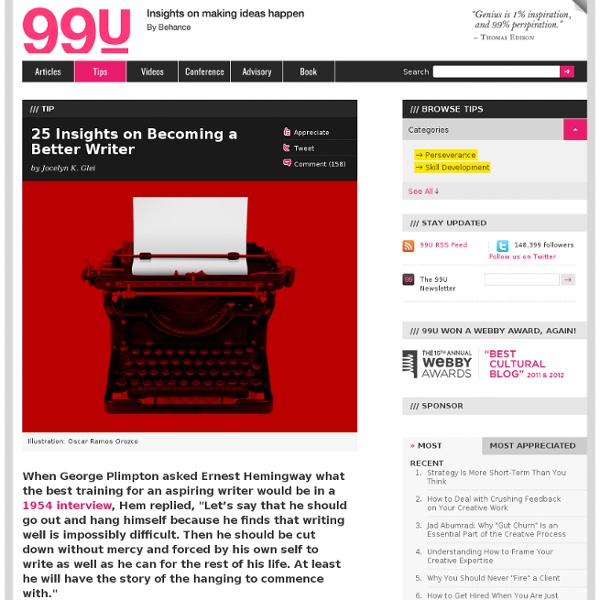 When George Plimpton asked Ernest Hemingway what the best training for an aspiring writer would be in a 1954 interview, Hem replied, “Let’s say that he should go out and hang himself because he finds that writing well is impossibly difficult. Then he should be cut down without mercy and forced by his own self to write as well as he can for the rest of his life. At least he will have the story of the hanging to commence with.” Today, writing well is more important than ever. Far from being the province of a select few as it was in Hemingway’s day, writing is a daily occupation for all of us — in email, on blogs, and through social media. It is also a primary means for documenting, communicating, and refining our ideas. So what can we do to improve our writing short of hanging ourselves? 1. Don’t just plan to write—write. 2. [The] Resistance knows that the longer we noodle around “getting ready,” the more time and opportunity we’ll have to sabotage ourselves. 3. 4. 5. 6. 7. 8. 9. 10. 11.

Fifteen Writing Exercises Writing exercises are a great way to increase your writing skills and generate new ideas. They give you perspective and help you break free from old patterns and crutches. To grow as a writer, you need to sometimes write without the expectation of publication or worry about who will read your work. Don’t fear imperfection. That is what practice is for. Creative Writing For Dummies Cheat Sheet Rewriting and editing helps to tighten up your work. But it can be difficult – what to chop and when to stop may not be clear, and you may change your mind more than once during the process. Ask yourself whether you need to take out: Unnecessary information and explanation.

(More) tips for writing well (Austin Govella at Thinking and Making) Published Wed, Jul 8, 2009 by Austin Govella. Updated Wed, Jul 8, 2009. As an editor, I’ve noticed several recurring bad habits you heathens would do well to disabuse yourselves of immediately. Almost without exception, these bad habits instantiate themselves as a series of stock phrases and constructions that reflect a lack of focus, a lack of fully developed argument, or the kind of intellectual laziness that sets in as you slog through your first draft.

Eight Secrets Which Writers Won’t Tell You Image from Flickr by Lazurite This is not particularly relevant to the post, but I’m getting an awful lot of comments telling me, often a little snarkily, “it’s ‘THAT’ not ‘WHICH’”. The “don’t use which for restrictive clauses” rule comes (as far as I can tell) from Strunk and White. Plenty of authors, including Austen, have used “which” exactly as I use it in the title. It’s very commonly used like this here in England, so I’m guessing my comments are coming from US readers. There was never a period in the history of English when “which” at the beginning of a restrictive relative clause was an error.

Creative Writing Prompts Many creative writers use prompts to generate new material. Prompts can be challenges -- for example, write a story using only one syllable words or craft an alphabet story where the first sentence begins with the letter A, the next sentence B, and so on -- or themes provided by journals, or a poem to which an writer can respond. For example, the Sun lists prompts and deadlines every issue. To see responses, check out "Readers Write." For a list of up-to-date journal prompts, deadlines, and contest information, see the Writing Program's bulletin board in Jensen on the second floor.

English 50 Exercises for Story Writers English 50 – Intro to Creative Writing: Exercises for Story Writers Basic Theory: What is a short story? As soon as someone delivers a definition, some good writer will write a story that proves the theory wrong. Read These Seven Books, and You’ll be a Better Writer Donald Miller I used to play golf but I wasn’t very good. I rented a DVD, though, that taught me a better way to swing, and after watching it a few times and spending an hour or so practicing, I knocked ten strokes off my game. I can’t believe how much time I wasted when a simple DVD saved me years of frustration. I’d say something similar is true in my writing career. 5 editor’s secrets to help you write like a pro I do a lot of copyediting, both of books and advertising collateral. I’ll let you in on a secret that still surprises me, although I’ve seen it hundreds of times now. If you looked at the raw work of most professional writers, you’d be pretty underwhelmed. Professional writers get work because they hit their deadlines, they stay on message, and they don’t throw too many tantrums. Some pros have a great writing voice or a superb style, but as often as not, that gets in the way.

Stocking Stuffers: 13 Writing Tips From Chuck Palahniuk *Editor's Note: This column is part of a collection of 36 total essays on the craft of writing by Chuck Palahniuk. They were submitted starting in 2005, so this essay will refer to thinks in the past and therefore be on an older timeline. Twenty years ago, a friend and I walked around downtown Portland at Christmas. The big department stores: Meier and Frank… Fredrick and Nelson… Nordstroms… their big display windows each held a simple, pretty scene: a mannequin wearing clothes or a perfume bottle sitting in fake snow. But the windows at the J.J. List of Interactive Quizzes The quizzes with a magenta marble are also listed within the section or digital handout to which they apply. The twenty-one quizzes with a green marble and designated "Practice" have been adapted from the instructor's manual and other ancillary materials accompanying Sentence Sense: A Writer's Guide. They are duplicated here with permission of the author, Evelyn Farbman, and the publisher, Houghton Mifflin Inc.

Tension Hook Your Readers With Tension By Laura Backes, Write4Kids.com Tension. Without it, life would be—let's face it—boring. So would fiction. Tension works with conflict to raise the emotional level of the text to a boiling point. It forces the reader to become invested in the story.