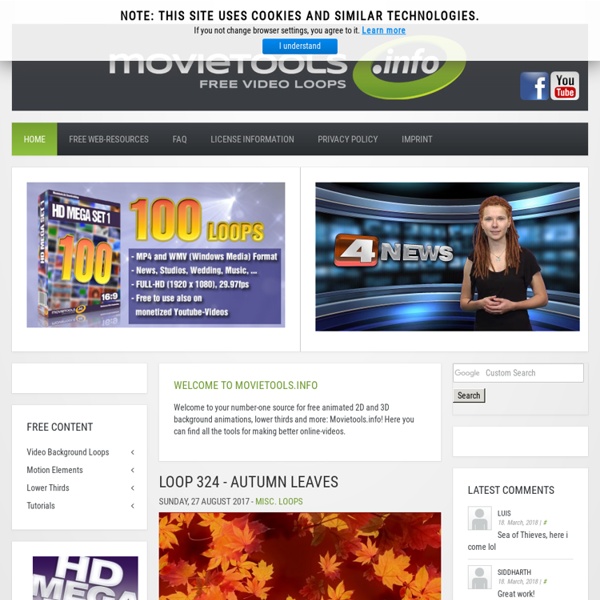 Use Flipgrid to Publish Instructional Videos The new school year will be here soon and I haven't taken a break all summer. I'm taking a short break from the Internet to go fishing at one of my favorite places in the world, Kennebago Lake. I'll be back with new posts on Saturday. While I'm gone I'll be republishing some of the most popular posts of the year so far. In Sunday's Practical Ed Tech Tip of the Week I mentioned three ways to use Flipgrid now that all features are free for all users.

Splasheo Below are a set of animated outros clips you can add to the end of your videos to make them instantly more effective. For example, they'll help you get more views, more subscribers and also more likes and comments... to name but a few benefits. To view them, simply click on their play buttons (click the full screen icon on the video if you want to see a bigger version). And to download them, simply click on the download button. Outros (Call To Action Clips) The Subscriber Multiplier Booster

AVCHD AVCHD (Advanced Video Coding High Definition)[1] is a file-based format for the digital recording and playback of high-definition video. Developed jointly by Sony and Panasonic, the format was introduced in 2006 primarily for use in high definition consumer camcorders.[2] Favorable comparisons of AVCHD against HDV and XDCAM EX[3][4] solidified perception of AVCHD as a format acceptable for professional use.

Category:Videos — Wikimedia Commons CancelEditDeletePreviewrevert Text of the note (may include Wiki markup) Could not save your note (edit conflict or other problem). Please copy the text in the edit box below and insert it manually by editing this page. Upon submitting the note will be published multi-licensed under the terms of the CC-BY-SA-3.0 license and of the GFDL, versions 1.2, 1.3, or any later version. How to Get the Most Out of Google Photos Movie Editor But if your smartphone or tablet is already capable of editing movies together, what is the point of a desktop app? This is the approach taken by the developers of the Google Photos app, which has an excellent movie editor built in. Capable of creating movies while you sleep from the clips in your library, or letting you do the hard work, it’s available absolutely free to iOS and Android users. Basically, if you have the Google Photos app (available free from your mobile app store), you have the movie editor. Want to find out more? Make Movies With Google Photos

Stock Footage, Video Clips, & Royalty-Free Stock Video Footage by Dreamstime Welcome to Dreamstime`s stock footage and video section. Here you`ll find a wide variety of professional SD & HD royalty free video footage to suit all your video production needs. Our talented videographers upload amazing stock footage daily covering a diverse range of subject matter from live action nature footage to abstract production elements Open Source Desktop Television Software Will Let Anyone Webcast Video At Virtually No Cost The sourcecode for a ground-breaking project has just been released by the Participatory Culture Foundation (PCF). The software, currently under development and due to be released in June, will enable anyone to broadcast full-screen video to thousands or millions of people at virtually no cost. Photo credit: Matt Williams The so-called 'Broadcast Machine' will be free web software built on top of the PCF's open-source project Blog Torrent.

The 7 Best Video Editors for Chromebook Chromebooks are more than mere glorified web browsers. They’re fantastic machines that can perform many of the same tasks as Windows and macOS. One of those tasks is video editing. Zoom H4n Hand held Digital Recorder - Portable Recorders from Inta Audio UK Zoom H4n Hand Digital Recorder - The H4n is Zoom's most sophisticated handheld recorder to date. The H4n by Zoom offers up a significantly improved user interface, integral X/Y stereo condenser microphones, a digitally controlled mic pre-amp and the ability to use both internal and external microphones simultaneously for 4-channel recording. Here at Inta Audio we love the Zoom H4n and we are sure you will too. H4N Product Information The Zoom H4n field recorder includes:

Use Toontastic 3D to Create Animated Videos Toontastic 3D is the latest version of the popular Toontastic animation app. The free app is available on the iOS, Android, and Chrome platforms. I now have the app installed on my Android phone, on my iPad, and on my Chromebook. SoCalVegasUsers : SCVUG - SoCal Sony Vegas Pro Users Group Welcome to The Southern California Vegas Users Group. The SCVUG is the first and largest established group of Sony Vegas Pro Video Editing Software Users with over 2200 worldwide members. The SoCal Vegas Users Group was founded in Los Angeles in 2003 and has grown into a Worldwide Sony Vegas Pro Users Group. The SCVUG Message Board Forum contains over 21,000 Sony Vegas Pro and video editing related Q&A message posts that are fully searchable. You can find quick answers to questions relating to Sony Vegas Pro 10 Video editing software as well as discussions on all Sony Media Software Products and applications like Sony DVD Architect, Sony Vegas Movie Studio, Sony Sound Forge, Sony Acid Pro, Sony CD Architect, Cinescore and many third party video editing applications software and products.

Important News About Adobe Spark Adobe Spark is a great tool for making videos, storytelling websites, and simple graphics. It has been popular since its launch a few years ago. Also since its launch there have been many questions about whether or not it can be used with students under the age of 13. Helvetica Neue - Free AE Template Animated fonts are a fantastic way to make your videos seem more engaging. The only problem? They can take a lot of time to create by hand. Making video: Using free archive film footage Regardless of a project's existing merits, there are times when you'll want to splice (and spice) up your footage with a little something extra. Well, you can. Be it a sequence from a classic silent movie or footage of an Arctic icesheet breaking apart, the internet boasts achives full of wonderful (and weird) footage just crying out to be in your film.