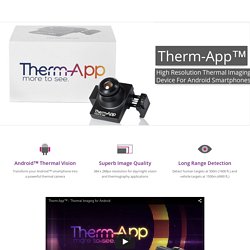 This revolutionary concept extends human vision by turning smartphones into thermal cameras. It is great news for professionals world wide, whether they are night guards, law enforcement officers, construction workers, air-conditioning technicians, service & maintenance personnel, physicians, veterinarians, farmers or hunters. Now you can purchase a lightweight, modular, low power device that clips onto your smartphone. Plug in its USB cable, and your phone turns into a powerful camera that can display thermal images, record them, share them – and run a whole new family of exciting dedicated night vision and thermography applications.

Therm-App™ combines the power of a fully functional thermal camera with the mobility, processing power, display capabilities and advanced features provided by smartphones today, and in the future. Seek Thermal Camera Android. Display Calibration - Part I. Oct 19 2010 Display Calibration Poll Results Last week, we polled MissingRemote readers regarding the calibration status of their displays and here are the results. 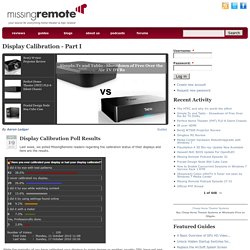 While the majority of you have calibrated your displays to some degree or another, roughly 25% have not and approximately 25% of you have either calibrated by viewing content or using settings found online. Basic Guide to Color Calibration using a CMS (updated and enhanced) There have been several repetitive questions about how to use a Color Management System (CMS) to achieve accurate color for those lucky enough to own a display that has one. 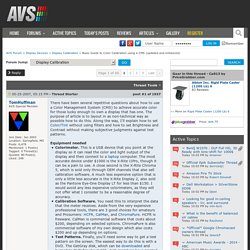 The purpose of article is to layout in as non-technical way as possible how to do this. Along the way, I'll explain how to set Color/Tint without using filters and how to set Brightness and Contrast without making subjective judgments against test patterns. Equipment needed Colorimeter. This is a USB device that you point at the display so it can read the color and light output of the display and then connect to a laptop computer. First, some basic principles and terminology. Gray scale tracking. AVS HD 709 - Blu-ray & MP4 Calibration. INTRODUCTION This project aims to provide a free set of calibration patterns for high definition (HD) video players. 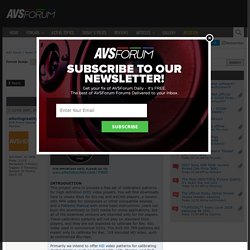 You will find downloads here to create discs for Blu-ray and AVCHD players, a version with MP4 video for computers or other compatible devices, and a Patterns Manual with some basic instructions. Users can burn the downloads to DVD media for some applications, but all of the download versions are intended only for HD players. These calibration patterns will not play on standard DVD players, and they are not expected to calibrate for Rec. 601 video used in commercial DVDs. The AVS HD 709 patterns are meant only to calibrate for Rec. 709 encoded HD video, such as commercial Blu-rays. Primarily we intend to offer HD video patterns for calibrating digital displays, such as current LCD, LED, Plasma, and DLP models.

DOWNLOADS Updated November 30, 2010 Directly below you will find the project downloads. Create 3D Models of Buildings with a UAV. DIY Photogrammetry: Open Source Alternatives to 123D Catch. Autodesk’s 123D Catch is great for making 3D scans from digital photos — miraculous, really — but it’s a cloud-based freebie that comes with constraints. 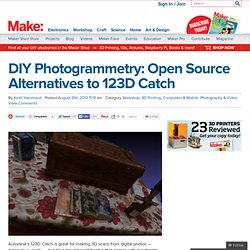 You can upload only a limited number of photos, and your 3D mesh will come back at a maximum resolution that may not be all you desire. Here are three ways to create your own 3D models with photogrammetry, aka “structure from motion (SFM)”, using free open source software: VisualSFM — Digital compositor Jesse Spielman wondered if he could match 123D Catch’s results with open source tools, spending zero dollars. A total noob, he dove in and a few weeks later wrote this incredible blog post showing how to use VisualSFM to roll your own point clouds without arbitrary limits on the number of photos or point cloud density, then use Meshlab to generate a mesh and paint it with the full-resolution photo texture. DIY Photogrammetry: Open Source Alternatives to 123D Catch. The Sony PXW-X70. Sometimes good things come in small packages! The new Sony PXW-X70 XDCAM camcorder. 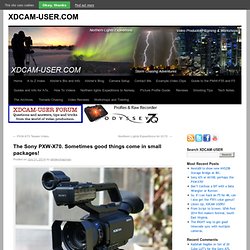 Initial Thoughts. As the owner of a Sony AX100, which is a really great little 4K and HD camcorder I wasn’t really all that excited when I saw the first prototype of the X70 at Broadcast Asia back in June. You see in the past Sony have done this many times, taken a high end consumer camcorder, updated the firmware, added a handle and then sold it for a higher price as a pro camcorder. In the past, there has in reality been little difference between the cheaper consumer model and the more expensive pro version. 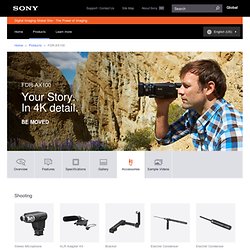 Sony A7series lens choices. Using third-party lenses on the Sony a7 / a7R: Digital Photography Review. Sony Unveils First Full-Frame Power Zoom Cinema Lens. Bokeh Dreams from 21mm to 135mm with Sony A7 & A7R. Dec. 2013 - Since the new full frame mirrorless "ILCE" cameras (A7 and A7R) from Sony were presented in October, thanks to its small flange distance many users where thrilled by the option to adapt nearly every lens. 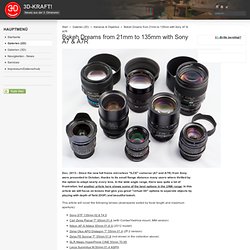 In the wide angle range, there was quite a lot of frustration, but another article here shows some of the best options in the UWA range. In this article we will focus on lenses that give you great "virtual 3D" options to seperate objects by playing with depth of field (DOF) and beautiful bokeh. This article will cover the following lenses (downwards sorted by focal length and maximum aperture): Holymanta. Full-frame compatible internal ND lens adapter With the VND series you get a lens adapter with a built in neutral ND filter. 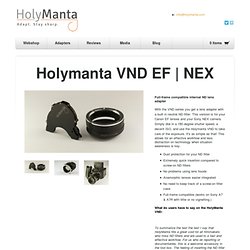 This version is for your Canon EF lenses and your Sony NEX camera. Simply dial in a 180 degree shutter speed, a decent ISO, and use the Holymanta VND to take care of the exposure. Sony A7S SLOG-2 Workflow. David Carstens » Testing Picture Profiles and Exposures with the a7S. a7S Noise and Color comparison from Espionage Films on Vimeo. 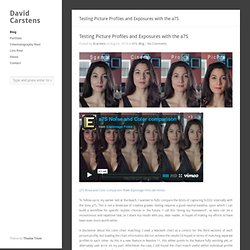 To follow-up to my earlier test at the beach, I wanted to fully compare the limits of capturing SLOG2 internally with the Sony a7S. SLR Magic Anamorphot 1.33x - 50. SLR Magic Anamorphot 1.33x 50 Anamorphic Adapter - SLR Magic UK. Canon EF 50mm f/1.2L USM Lens. After using this lens for a few hours shooting for my robotics team, I already have a good impression on what this lens is like.

First of all, it is a big lens. The filter size is as big as my 17-40mm zoom! It is also very heavy. It adds quite a bit of weight to the camera. However, my biggest gripe is the focusing speed. Shoot RM VPR1 Timer Remote Shutter Control Release for Sony A7 A6000 Camera. Sony a7S Astrophotography Review – Lonely Speck. SliderPLUS PRO - edelkrone® USA.

Front-Box Series. What Good is a Macbeth/Colorchecker Chart? by Art Adams. Most camera rental houses have an in-house expendables store, and during a recent visit to one such store I ran across a stack of X-Rite "Macbeth" ColorChecker charts sitting on a shelf. I'm firmly convinced that the only reason people buy these is because they think there is a reason to use them for film-style production... but if there is a reason I can't think of what it is. Let me explain: I work as a consultant, both paid and unpaid, to DSC Labs, manufacturers of the highest quality video test charts in the world. I straddle both the film and video worlds, and a while back I realized that there was no simple, universal, dedicated color chart for film-style HD production. So... In the days of film it was often enough to shoot an 18% gray card as a reference. HD is very different. At present I know of only three companies that make charts that can be used, in one fashion or another, to control dailies in HD.

Critter & Guitari. Our Video Scope video synthesizer produces colorful oscilloscope-style patterns on a television or projector. It displays the waveform of the audio input. It works particularly well with simple bassy tones. The grid of images on the left shows some of the possibilities when using the Pocket Piano as a sound source. The Video Scope has two knobs. One knob controls the input gain, and the other knob selects one of four display modes: Line, Color Shifter, Trapezoid, and Randomizer. The video to the left demonstrates some of the possible patterns. Anamorph-X GP - Quick FOV Comparison. Sony A7 A7r Book by Gary L. Friedman. The Friedman Archives Press. DSC Labs FrontBox OneShot Dailies Reference Chart FBOS B&H Photo. Letus Follow Focus Overview. Wireless Monitoring with the Radian Pro Unicast. JumpStart LTC - Features.