In Just a Few Short Years, CRISPR Has Sparked a Research Revolution. In Brief CRISPR is allowing scientists to make great strides in many fields in the relatively short time it's been in use. 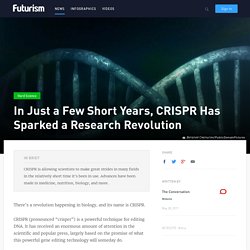 Advances have been made in medicine, nutrition, biology, and more. A World First CRISPR Trial Will Edit Genes Inside the Human Body. In Brief The CRISPR process will be used inside the human body for the first time on July 15th to combat HPV, which impacts millions of people worldwide. 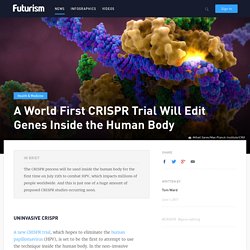 And this is just one of a huge amount of proposed CRISPR studies occurring soon. Uninvasive CRISPR A new CRISPR trial, which hopes to eliminate the human papillomavirus (HPV), is set to be the first to attempt to use the technique inside the human body. In the non-invasive treatment, scientists will apply a gel that carries the necessary DNA coding for the CRISPR machinery to the cervixes of 60 women between the ages of 18 and 50. Unraveling The Controversy Over The CRISPR Mutations Study. A new research paper is stirring up controversy among scientists interested in using DNA editing to treat disease. 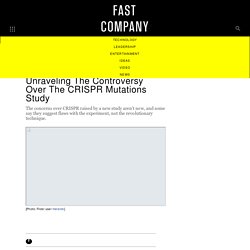 In a two-page article published in the journal Nature Methods on May 30, a group of six scientists report an alarming number of so-called “off-target mutations” in mice that underwent an experimental gene repair therapy. CRISPR, the hot new gene-editing technique that’s taken biology by storm, is no stranger to headlines. What is unusual, however, is a scientific article so clearly describing a potentially fatal shortcoming of this promising technology.

The research community is digesting this news—with many experts suggesting flaws with the experiment, not the revolutionary technique. The Promises and Pitfalls of Easy Genetic Modification. 0 Shares For $150, you can buy a CRISPR kit online and use it to engineer heartier gut bacteria in your kitchen. 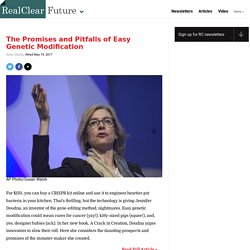 That's thrilling, but the technology is giving Jennifer Doudna, an inventor of the gene-­editing method, nightmares. Easy genetic modification could mean cures for cancer (yay!) , kitty-sized pigs (squee!) Wired. HIV has no cure. 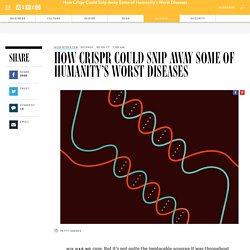 But it’s not quite the implacable scourge it was throughout the 1980s and 1990s. Education, prophylactics, and drugs like PrEP have cut down its transmission. Anti-retroviral treatments keep HIV-positive people’s immune systems from collapsing. But still, no cure. Part of the problem is HIV’s ability to squirrel itself away inside a cell’s DNA—including the DNA of the immune cells that are supposed to be killing it. The same ability, though, could be HIV’s undoing. Those diseases are all treatable, to varying degrees. Gene therapy has promised to revolutionize medicine since the 1970s, when a pair of researchers introduced the concept of using viruses to replace bad DNA with good DNA. Federal panel approves first use of CRISPR in humans. How Gene Editing Could Ruin Human Evolution. How gene editing is changing the world. The gene-editing tool CRISPR-Cas9 has been used in a human for the first time, marking a major milestone in genomic research. 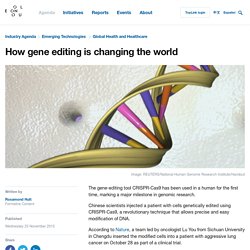 Chinese scientists injected a patient with cells genetically edited using CRISPR-Cas9, a revolutionary technique that allows precise and easy modification of DNA. According to Nature, a team led by oncologist Lu You from Sichuan University in Chengdu inserted the modified cells into a patient with aggressive lung cancer on October 28 as part of a clinical trial. CRISPR (clustered regularly interspaced short palindromic repeats) are patterns of DNA sequences found in the genomes of bacteria and other microorganisms. If a virus threatens, the bacteria use the CRISPR immune system to identify and destroy the viral genome. Scientists have adapted this system to use in cells from animals and, now, humans. New era of 'cut and paste' humans close as man injected with genetically-edited blood  An Era of Super Crops: How CRISPR Could Help Fight Famine. In Brief There are about 4,000 inherited diseases that are caused by a single broken gene. 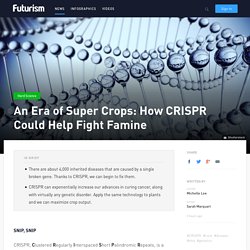 Thanks to CRISPR, we can begin to fix them. CRISPR can exponentially increase our advances in curing cancer, along with virtually any genetic disorder. Apply the same technology to plants and we can maximize crop output. CRISPR, Clustered Regularly Interspaced Short Palindromic Repeats, is a powerful genetic editing tool. But CRISPR isn’t just for humans or animals – it can be used on any living organism, including plants. Geneticists at the Chinese Academy of Sciences in Beijing, for example, have discovered that we can restructure wheat genes to make them immune to powdery mildew. A New Weapon Another example comes from researchers at Abdullah University of Science and Technology’s Center for Desert Agriculture. According to study coauthor Zahir Ali, the team is now working to create plant lines that can pass on the CRISPR-mediated viral resistance to the next generation. Federal panel approves first use of CRISPR in humans. Cutting Out Cancer: CRISPR Gene Editing Could Make Cancer Mutations Inactive.

CRISPR cuts out $90M IPO bid as another gene editing biotech goes public. Finally following in the wake of Editas and Intellia, CRISPR Therapeutics has decided to buck the tumultuous 2016 IPO trend by going public with its highly sought-after tech. 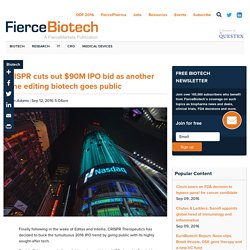 Back in Februrary, and after a fairly prolonged biotech IPO drought, Cambridge, MA-based upstart Editas Medicine ($EDIT) raised $94.4 million by pricing 5.9 million shares at $16--although this was at the bottom of its anticipated range of $16 to $18. A few months later in May the more bullish, Novartis-backed and also Cambridge, MA-based Intellia Therapeutics ($NTLA) raised $108 million, with both drawing on their preclinical CRISPR-Cas9 gene editing tech to whip up some fairly major investor interest. It booked around $2 million in sales for the year ending June 30, 2016, although it made an operating loss of nearly $30 million in the first half of 2016.

CRISPR gene-editing method shows promise for agriculture. Vital farmable cropland is decreasing in size due to soil degradation, the spread of urban sprawl, industrial crop plantations and the marked effects of climate change. 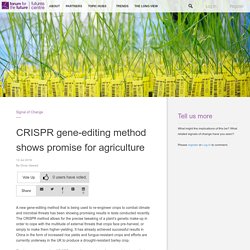 Shrinking farmable landmasses and a rapidly growing population pose a genuine threat to food sustainability - a lot sooner than most think; the UN expects the global population to reach 10 Billion by 2050. Simply put, we will have too few crops for too many people. CRISPR appears to offer an important contribution to reversing this problem.

It side steps the drawn-out regulatory process demanded of GMO products, which means that it will be able to perform its intended function at the time of its need (past cases saw GMO products designed to fight microbial threats which evolved resistances by the time the GMO products made it to the market). However, it is important to establish boundaries and governing policy early on to prevent abuses or misuse of the technology. #signalspottedby: Omar Gawad. Chinese Scientists Will Perform First CRISPR Human Gene Editing Trial In August. Scientists call for caution in using DNA-editing technology. A group of 18 scientists and ethicists today warned that a revolutionary new tool to cut and splice DNA should be used cautiously when attempting to fix human genetic disease, and strongly discouraged any attempts at making changes to the human genome that could be passed on to offspring. 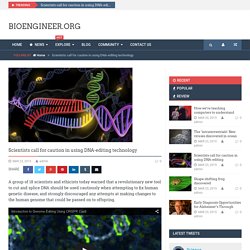 Among the authors of this warning is Jennifer Doudna, the co-inventor of the technology, called CRISPR-Cas9, which is driving a new interest in gene therapy, or “genome engineering.” She and colleagues co-authored a perspective piece that appears in the March 20 issue of Science, based on discussions at a meeting that took place in Napa on Jan. 24. The same issue of Science features a collection of recent research papers, commentary and news articles on CRISPR and its implications.

Such warnings have been issued numerous times since the dawn of genetic engineering in 1975, but until now the technology to actually fix genetic defects was hard to use. Correcting genetic defects Story Source: Researchers Use DNA ‘Clews’ to Shuttle CRISPR-Cas9 Gene-Editing Tool into Cells. Do-it-yourself CRISPR genome editing kits bring genetic engineering to your kitchen bench.

Biology Loz Blain November 11, 2015 CRISPR genome editing is one of the most significant, world-changing technologies of our era, allowing scientists to make incredibly precise cut n' paste edits to the DNA of living organisms. Now, one synthetic biologist from NASA plans to make it as accessible as a home science kit, so you can bio-hack yeast and bacteria on your kitchen bench.