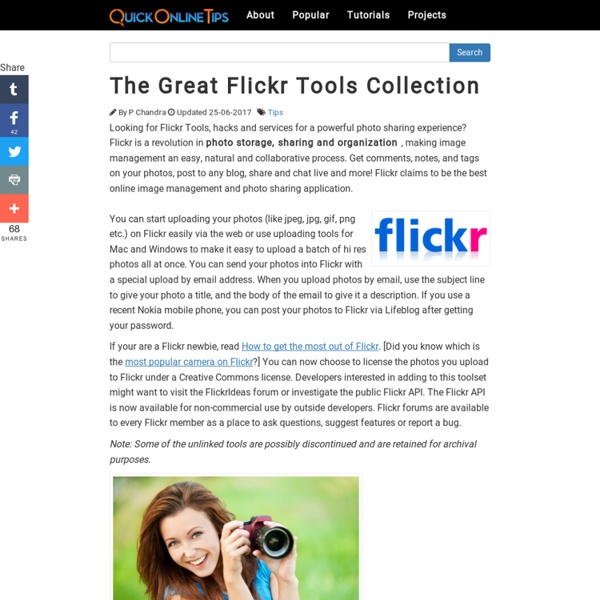 Looking for Flickr Tools, hacks and services for a powerful photo sharing experience? Flickr is a revolution in photo storage, sharing and organization , making image management an easy, natural and collaborative process. Get comments, notes, and tags on your photos, post to any blog, share and chat live and more! Flickr claims to be the best online image management and photo sharing application. You can start uploading your photos (like jpeg, jpg, gif, png etc.) on Flickr easily via the web or use uploading tools for Mac and Windows to make it easy to upload a batch of hi res photos all at once. If your are a Flickr newbie, read How to get the most out of Flickr. Note: Some of the unlinked tools are possibly discontinued and are retained for archival purposes. Official Flickr Tools Flickr Uploadr -Download an installer (.exe) that allows you to publish a batch of photos into Flickr directly from your computer. Third Party Flickr Tools

Flickr Flickr (pronounced "flicker") is an image hosting and video hosting website, and web services suite that was created by Ludicorp in 2004 and acquired by Yahoo in 2005. In addition to being a popular website for users to share and embed personal photographs, and effectively an online community, the service is widely used by photo researchers and by bloggers to host images that they embed in blogs and social media.[3] History[edit] Yahoo acquired Ludicorp and Flickr in March 2005. Flickr upgraded its services from beta to "gamma" in May 2006; the changes attracted positive attention from Lifehacker.[22] In December 2006, upload limits on free accounts were increased to 100 MB a month (from 20 MB) and were removed from Flickr Pro accounts, which originally had a 2 GB per month limit.[23] On 9 April 2008, Flickr began allowing paid subscribers to upload videos, limited to 90 seconds in length and 150 MB in size. Corporate changes[edit] Features[edit] Accounts[edit] Organization[edit]

FLICKR TOOLBOX: 100+ Tools For Flickr Addicts Flickr is back in the news this week with reports that it will add video. But we're still loving the photo-sharing element: here's 100+ ways to get even more out of the popular photo site. Desktop Applications 1001 for Mac OS X - Allows batch uploading and can notify you of new photos uploaded by your friends. Background Switcher - Will auto-change your desktop background on a Windows machine at intervals of your choosing from a pool of photos you pick. Desktop Flickr Organizer for Gnome - Desktop organizer for Linux that allows online and offline work on your photos and tagging. Flickr and Webimager - Lets you capture your entire screen, or just a portion, and auto-upload it to your account. Flickr Exporter for Aperture - Tag and upload your photos, store ID and URL for your photos in the Aperture program. Flickr Exporter for iPhoto -Edit photos, add tags, resize before loading and several other useful options. Flickr Finder - Mac OS X application for browsing your photos. Firefox Extensions

60+ Tools To Enhance Your Flickr Experience Being a popular online image platform, Flickr has enabled Internet users to manage and share digital photos easily as long as there’s an Internet connection. Flickr is a revolution for photo sharing and management plus it has a huge community of photographers who provide great photos there for the world to see. However, speaking of its graphics user interface, it seems not really user-friendly in term of viewing and searching photos on Flickr. If you’re a Flickr regular user like us, we believe you can explore Flickr in a better way with below quality tools which based on Flickr API. Full list after jump. Flickr Downloaders & Uploaders Tools that enable you to download or upload series of photos to Flickr. Flickr Importr Flickr Importr is a tool for Windows that allows you to upload images to Flickr and automatically add them to groups and sets. Flickr Search Engines Powerful new photo search engines that work with the Flickr API. Flickr Slide Show & Gallery Makers Interesting Flickr Tools

Blog educationalsoftware - Flickr Flickr This tool has been upgraded to having a page to itself as there are so many tools that are designed to support Flickr they need the space! Introduction Flickr is basically a storage area for images (and now short videos!). Features When you upload the pictures, you are able to set the level of privacy you want for the pictures (eg who can see them – family, friends or public).The ‘Add Note’ function allows you to set areas on the picture where a pop up comment will appear when the mouse rolls over that section of the picture.Pictures can be downloaded in a range of sizes from Flickr by anyone able to view the pictures if you allow this.You can lock down features such as adding notes and downloading to protect the copyright of pictures.You can download Flickr Uploader from the site to make uploading a large number of photos at once much easierUploaded videos have an excellent video compression quality compared to other online video sites (but can only be 90 seconds long!) CompFight