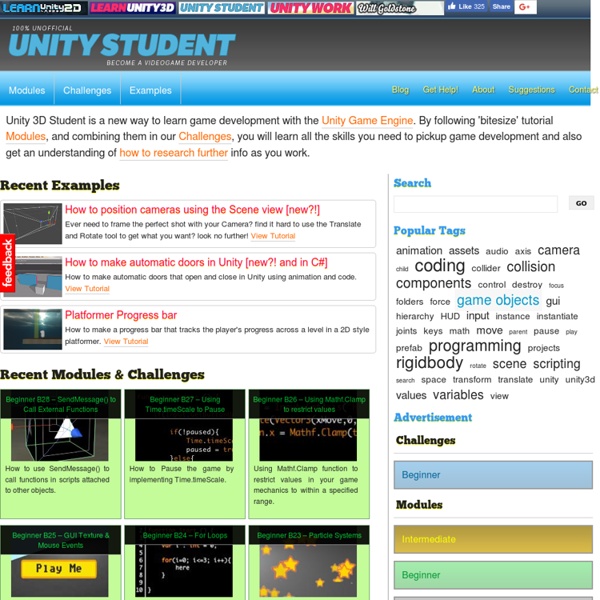 Unity Course Start Here (Free) How do I get WBS Certified? Here’s how you can receive the ‘Walker Boys Studio Course Certificate in Unity Game Development’ and a WBS Certificate image for your website. 1. Complete and pass all exams (We’ll be keeping track of that automatically). 2. Complete all five Lab projects (The Details and minimum requirements must be met). License, Version 2.0 Apache License Version 2.0, January 2004 1. Rob Miles - C# Yellow Book The C# Yellow Book is used by the Department of Computer Science in the University of Hull as the basis of the First Year programming course. You can download your own copy from here. We give away a free printed copy to students when they arrive in the department, and we also give a copy away to anyone who comes to see us on an Open Day. This is the 2014 version of the book, the Rubber Duck edition. The material in the Yellow Book is Copyright (c) Rob Miles and the University of Hull 2014.

Free and Open Source Game Maker Clone - Your Announcements ENIGMA, the Extensible Non-Interpreted Game Maker Augmentation, is an open source cross-platform game development environment derived from that of the popular software Game Maker. Its intention is to provide you with a quality game creation tool and a bridge between high- and low-level programming languages. It can be used either through an IDE, namely, its sister project, LateralGM, or through a Command line interface. * Completey Free* Open Source* Much Faster* More Powerful* Community Driven* Box2D Physics check us out! Getting Started in Android Game Development If you're interested in developing a game for the Android platform, there is a lot you need to know. I'm the developer of Light Racer, Light Racer 3D, Antigen, Deadly Chambers and Wixel, which are currently available on the Android Market. I've also been involved with the development of about 5 other games for Android and iOS and am co-author of Beginning Android Games 2nd Edition. I've developed games before but the original Light Racer was my first Android application and I learned quite a bit about writing Android games that I'd like to share with everyone. I even wrote an online book detailing the development of Light Racer 3D, which is full of how-tos and useful code snippets. If you have previous experience with game development, moving over to the mobile platform won't be all that difficult.

Beginners Games Programming So you want to be a games developer? One of the only things better than playing games in my opinion is creating them! Whilst it can be hard work learning to write computer games, it is also incredibly rewarding. I want to be a game developer... now what? With people looking to get into game development the same questions come up over and over, so I’ve opted to put my thoughts on the subject in one place and to compile a list of resources for new developers. Those questions? “I want to learn game programming, what language should I use?”