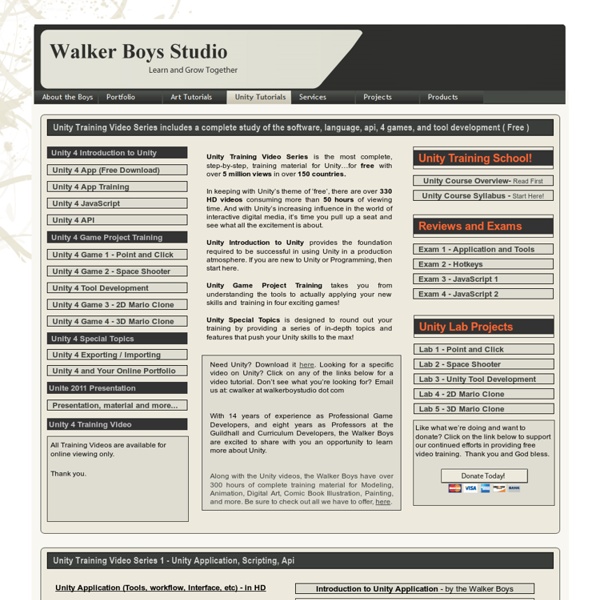 Unity Training Video Series is the most complete, step-by-step, training material for Unity…for free with over 5 million views in over 150 countries. In keeping with Unity’s theme of ‘free’, there are over 330 HD videos consuming more than 50 hours of viewing time. And with Unity’s increasing influence in the world of interactive digital media, it’s time you pull up a seat and see what all the excitement is about. Unity Introduction to Unity provides the foundation required to be successful in using Unity in a production atmosphere. If you are new to Unity or Programming, then start here. Unity Game Project Training takes you from understanding the tools to actually applying your new skills and training in four exciting games! Unity Special Topics is designed to round out your training by providing a series of in-depth topics and features that push your Unity skills to the max!

Go Beyond Retro Pixel Art With Flat Shaded 3D in Unity In this tutorial, I'll show you how to create flat-shaded 3D graphics for your Unity game, and explain why you'd want to do it in the first place. Today, there is an abundance of 3D tools and engines that allow anyone to make 3D games. However, the challenges of 3D art are daunting and often require a huge amount of time, effort, and expertise which the solo gamedev or hobbyist doesn't have. Low-polygon models, in combination with flat shading, brings back the style of the early '90s, using techniques that anyone can learn. And it's not just a nostalgic throwback; flat-shading can easily be combined with modern techniques like ambient occlusion maps to give your game a striking, avant-garde look. Get the example Unity project here

HTML5 This specification defines the 5th major version, second minor revision of the core language of the World Wide Web: the Hypertext Markup Language (HTML). In this version, new features continue to be introduced to help Web application authors, new elements continue to be introduced based on research into prevailing authoring practices, and special attention continues to be given to defining clear conformance criteria for user agents in an effort to improve interoperability. This section describes the status of this document at the time of its publication. Other documents may supersede this document. A list of current W3C publications and the latest revision of this technical report can be found in the W3C technical reports index at

Low Poly Character Creation in Blender and Unity Create Your Own Game Characters There’s no doubt about it, many of us get into CG because we wanted to make games. I was no different. Ever since I first started in Blender one of my goals was to make characters for my favorite games. Through this course you’ll learn how to make your very own characters by working through each of the key stages to the character creation process for real-time environments.

11 Incredibly Inspiring Service & App Websites A lot of times, services and app websites are a little bit neglected by designers, and this is why finding a well designed service/app site can be a challenge. But if you really dig around, you can find something inspiring, like the ones we will show here today. From good use of images and type, to videos and navigation, these websites are good examples that you need to deliver a good webpage to present your service or application to attract users. Remember that the user needs to understand what you are offering. HTML Borders The best way to create HTML borders is to actually use CSS (Cascading Style Sheets). Using CSS, you can create a border around any HTML element. There are a range of CSS properties that you can use to define borders but the shorthand border property is the most concise way.

New Tool: TileEditor While a simple extension, TileEditor makes a great addition to the rapid-prototyper’s tool belt, making it easy for you to draft out levels, dungeons, and mazes for your games. It comes with a simple tile-based pathfinding system as well, allowing you to quickly calculate the shortest path between two points in the map. Get it Here GitHub Repository

Mental Disorders & Conditions - DSM Childhood disorders, often labeled as developmental disorders or learning disorders, most often occur and are diagnosed when the child is of school-age. Although some adults may also relate to some of the symptoms of these disorders, typically the disorder’s symptoms need to have first appeared at some point in the person’s childhood. These disorders typically aren’t diagnosed until an individual is a young adult, often not until their 20’s or even 30’s. Most individuals with personality disorders lead pretty normal lives and often only seek psychotherapeutic treatment during times of increased stress or social demands.

Ultimate Input Manager for Unity Unity Input Manager pain has lasted for years. On the Unity feedback site you can find requests for InputManager programmatic access dating from 2009. Futile! Introduction to Unity Test Tools - APIs and Tools This article was originally posted on Random Bits Unity Test Tools is a package officially released by the folks at Unity in December 2013. It provides developers the components needed for creating and executing automated tests without leaving the comforts of the Unity editor. The package is available for download here.

Random Dungeon Generator for Unity Daedalus 1.0.0 Unity and Unity Pro compatibleNow with FULL 3D generation! Create mazes, dungeons, towers and multi-floor buildings with ease!Different high-quality Art Assets included! Links: Web|Docs|Support|Videos Daedalus is a random maze and dungeon generator add-on for Unity3D. Its purpose is to give game developers a different and quick way of creating game levels, adding a little bit of randomness to them. Daedalus creates tile-based maps and can be used both in Unity Editor, to generate game levels for later editing, and in runtime applications, to randomly create levels while playing.

MazeGenerator Overview This Javascript maze generator is used in the Fugu Maze player/widget. It's based on a recursive subdivision algorithm described in the Wikipedia article on maze generation. The complete project is available on the Unity Asset Store How to 100% check internet availability Great Code. Although I came across a major problem with this script. This script correctly shows result what it is intended for. I tried to make it check for connection avilability: public static bool IsConnected(string hostedURL=" try{ string HtmlText = GetHtmlFromUri(hostedURL); if(HtmlText == "" ) return false; else return true; } catch(IOException ex) { return false; }} It is working fine but, when the machine is offline, It freezes the application(Unity Editor) and after 10 seconds or so it resumes.