46 Tips & Tricks for 2D mobile Performance in Unity. If this is your first jump into the world of Unity, my first tip (this one’s a freebie) is to stop trying to use it like other languages and environments. 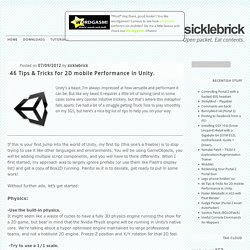 You will be using GameObjects, you will be adding multiple script components, and you will have to think differently. When I first started, my approach was to largely ignore prefabs (or use them like Flash’s display list) and get a copy of Box2D running. Painful as it is to deviate, get ready to put in some work! Without further ado, let’s get started: Physics: -Use the built-in physics.It might seem like a waste of cycles to have a fully 3D physics engine running the show for a 2D game, but bear in mind that the Nvidia PhysX engine will be running in Unity’s native core.

-Try to use a 1/1 scale. Capital: Adventures in adventure creating. Games can be the perfect medium to tell stories with. 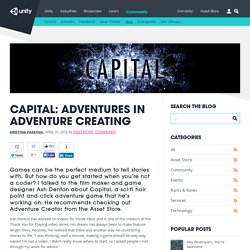 But how do you get started when you’re not a coder? I talked to the film maker and game designer Ash Denton about Capital, a sci-fi noir point and click adventure game that he’s working on. He recommends checking out Adventure Creator from the Asset Store. Ash Denton has worked on videos for Inside XBox and is one of the creators of the Thank You for Playing video series. His dream has always been to make feature-length films. One of those friends was Mike Bithell, the Thomas Was Alone developer, who recommended that Ash check out some Unity tutorials. Capital concept art He concluded that learning Unity was worth the effort and downloaded the free version of Unity 4.5. Mike Bithell also recommended the Asset Store. Soon, he found Adventure Creator on the store. 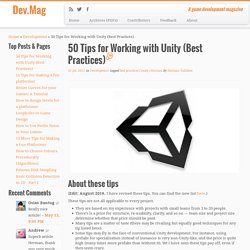 I have revised these tips. You can find the new list here.) These tips are not all applicable to every project. They are based on my experience with projects with small teams from 3 to 20 people.There’s is a price for structure, re-usability, clarity, and so on — team size and project size determine whether that price should be paid.Many tips are a matter of taste (there may be rivalling but equally good techniques for any tip listed here).Some tips may fly in the face of conventional Unity development. Process 1. 2. 3. 4. It makes it unnecessary to re-setup each scene.It makes loading much faster (if most objects are shared between scenes).It makes it easier to merge scenes (even with Unity’s new text-based scenes there is so much data in there that merging is often impractical in any case).It makes it easier to keep track of data across levels.

You can still use Unity as a level editor (although you need not). Unity Patterns. Git and Unity projects - Damien Mayance (Valryon) I know this has been covered a hundred times over the Internet, but I need to centralized all the useful information for my future projects. 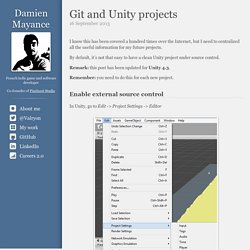 By default, it’s not that easy to have a clean Unity project under source control. Remark: this post has been updated for Unity 4.3. Remember: you need to do this for each new project. Enable external source control In Unity, go to Edit -> Project Settings -> Editor In the inspector window, select Visible Meta Files mode under Version Control and Force Text under Assets Serialization. The first option will allow a project to be commited without the huge Library folder, containing the asset database. Universal Fighting Engine: Building a business on the Asset Store. Daniel Esteves is an Asset Store publisher who is all in. 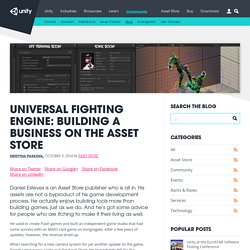 His assets are not a byproduct of his game development process. He actually enjoys building tools more than building games, just as we do. And he’s got some advice for people who are itching to make it their living as well. He used to create Flash games and built an independent game studio that had some success with an MMO card game on Kongregate. After a few years of updates, however, the revenue dried up. When searching for a new camera system for yet another update on the game, Daniel came across Unity and the Asset Store. UFE launched on the Asset Store in December 2013, but Daniel started pitching the idea to potential customers a long time before that. Since the release, Daniel has been working on updates and customer support, eventually hiring two freelancers to help him with development.

“If you are a coder, document EVERYTHING. That said, he knows that customer support pays off. What does the future hold for UFE?