Converting 2D Swipe Input into 3D Game. Hi all, I am making an iPhone game where a user swipes an object to try and land that object in the designated target area. 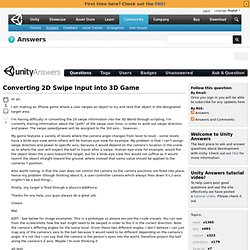 I'm having difficulty in converting the 2d swipe information into the 3D World through scripting. I'm currently storing information about the "path" of the swipe over time, in order to work out swipe direction and power. The swipe speed/power will be assigned to the 3rd axis... however... My game features a variety of levels where the camera angle changes from level to level - some levels have a birds-eye-view while others will be human-eye-view for example. Also worth noting, is that the user does not control the camera so the camera positions are fixed into place, hence my problem (though thinking about it, a user-controller camera which always fires down it's z-axis mightn't be a bad thing)... 3D Game Engine Programming.

Unity GUI In this article I will introduce the reader to Graphical User Interface (GUI) scripting in Unity. 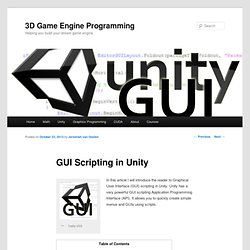 Unity has a very powerful GUI scripting Application Programming Interface (API). It allows you to quickly create simple menus and GUIs using scripts. Unity provides the ability to create GUI interfaces through the use of scripts. At the time of this writing, Unity does not provide a native visual GUI development tool, although you can probably find some tools on the Unity Asset Store that can be used to create GUIs using some form of visual scripting. Unity provides two primary classes for creating GUIs. Exit Games: Multiplayer Game Backends and Services. NGUI: Free Edition. Location Toronto, ON Posts 1,901 Have you been tempted to give NGUI a try, but just don't want to commit to spending money on something that you may not use? 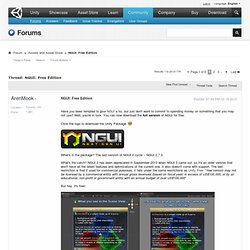 Well, you're in luck. You can now download the full version of NGUI for free. Click the logo to download the Unity Package. What's in the package? The last version of NGUI 2 cycle -- NGUI 2.7.0. Last edited by ArenMook; 03-12-2014 at 02:01 PM. Posting Permissions. 2D Toolkit. Read more about our Unity 4.3 integration here. 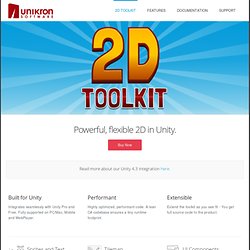 Built for Unity Integrates seamlessly with Unity Pro and Free. Fully supported on PC/Mac, Mobile and WebPlayer. Performant Highly optimized, performant code. Practical Guide to Optimization for Mobiles. This guide is for developers new to mobile game development, who are probably feeling overwhelmed, and are either planning and prototyping a new mobile game or porting an existing project to run smoothly on a mobile device. 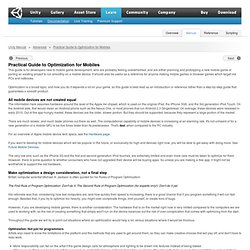 It should also be useful as a reference for anyone making mobile games or browser games which target old PCs and netbooks. Optimization is a broad topic, and how you do it depends a lot on your game, so this guide is best read as an introduction or reference rather than a step-by-step guide that guarantees a smooth product. All mobile devices are not created equal The information here assumes hardware around the level of the Apple A4 chipset, which is used on the original iPad, the iPhone 3GS, and the 3rd generation iPod Touch.

On the Android side, that would mean an Android phone such as the Nexus One, or most phones that run Android 2.3 Gingerbread. There are much slower, and much faster phones out there as well. British computer scientist Michael A. Optimizing Graphics Performance. Good performance is critical to the success of many games. 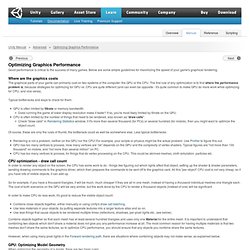 Below are some simple guidelines for maximizing the speed of your game's graphical rendering. Where are the graphics costs The graphical parts of your game can primarily cost on two systems of the computer: the GPU or the CPU. Practical Guide to Optimization for Mobiles - Optimizing Scripts. This section demonstrates how you would go about optimizing the actual scripts and methods your game uses, and it also goes into detail about the reasons why the optimizations work, and why applying them will benefit you in certain situations. 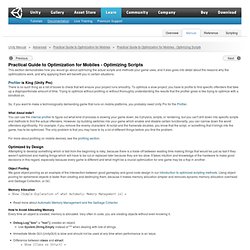 Profiler is King (Unity Pro) There is no such thing as a list of boxes to check that will ensure your project runs smoothly. PushyPixels. Créer un jeu avec Unity3D RPG Finaliser le jeu (objectif) 10. Créer un jeu avec Unity3D Introduction 01. Unity Book Roundup. Unity brings you ever closer to the "author once, deploy anywhere" dream. 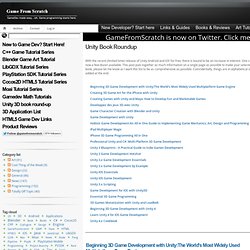 With its multiplatform capabilities, you can target desktop, web, mobile devices, and consoles using a single development engine. Little wonder that Unity has quickly become the #1 game engine out there. Mastering Unity is absolutely essential in an increasingly competitive games market where agility is expected, yet until now practical tutorials were nearly impossible to find. Creating Games with Unity and Maya gives you with an end-to-end solution for Unity game development with Maya. Written by a twelve-year veteran of the 3D animation and games industry and professor of 3D animation, this book takes you step-by-step through the process of developing an entire game from scratch-including coding, art, production, and deployment. This accessible guide provides a "non-programmer" entry point to the world of game creation.