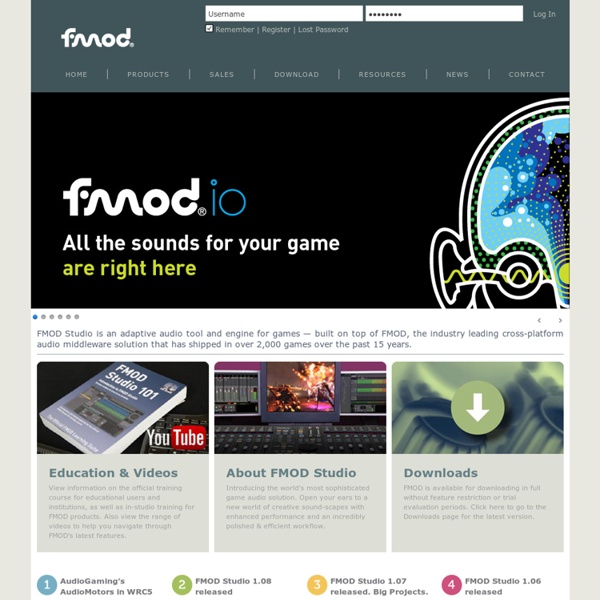 Introduction to Digital Audio In the game development environment Unity (version 4.2.1) it is possible to work with audio in the scenes. To add audio to a game scene an Audio Listener component and one or more Audio Source components need to be added to the game objects of the scene. An Audio Source can be used to play back an Audio Clip which is either an Audio File or a Tracker Module. The Audio Listener acts as a microphone-like device. Parameters in the Audio Source components can be adjusted in the Inspector of the GUI to define the behavior of the sounds attached to the game objects in a scene,. In this note a number of simple Unity scenes will introduce you to game audio in Unity. 1. In [1] two categories are described to characterize the usage of sound in a game scene: "The use of sound in (3D) computer games basically falls in two. The sound scene we will implement is a seashore with the sound of the sea as the background texture, and the sound of seagulls as foregound events. Background Texture Exercise 1

Java Applet Tutorial Java Applet Tutorial This site is meant to be a quick-and-dirty introduction to writing Java applets. A set of example applets are given to be used as exercises. Feel free to download the source code herein, try it out on your own machine, and modify it. Designers and artists: this tutorial emphasizes visual and interactive aspects of applets. Before getting started, you'll need a compiler for Java, so that you can translate source code into something executable. After getting a compiler, you can try out the examples. All of these examples were designed to be small and, hopefully, easy to absorb. If you're looking for books on Java, O'Reilly publishes some good ones, although they are most useful to people with at least a bit of prior programming experience. First-time programmers will probably find that the explanations given in this tutorial are too brief and leave out too many details. Thanks to Richard Streitmatter-Tran for encouraging me to create these lessons !

CompoHub - Find game jams Lost Chocolate Blog: Footsteps – Informal Game Sound Study THE STOCK MARKET Lately, I've been taking stock. Not the usual “What have I done with my life?” or “Where is everything headed?” (although those questions perpetually tumble around my brain stem on a regular basis); I somehow found myself obsessed with the minute details of movement sound and system design. If you're working in games today, chances are good that you've recorded, implemented, or designed systems for the playback of character footsteps and Foley at some point during the course of your career. It's even more likely that you've played a game where, at some point during your experience, footstep sound wrestled your focus away from the task at hand and demanded your listening attention. Yet, let it be said, all footsteps are not created equal – which seems obvious given that no two games are exactly the same, neither should their footsteps or the way in which they are implemented be (necessarily) the same. “the footstep system uses more than 1,500 original recorded samples.

NEO Flash Team 2005 - NDS Flash Cart Linker, GBA SP Flash Cart Linker 3 in 1 Ludum Dare Ludum Dare 29 Theme Slaughter!! April 10th, 2014 1:16 pm With over 3000 themes suggested by the community, how do we make that more manageable? It’s like hot-or-not for Ludum Dare themes. Next week we kick off Warmup Weekend (April 19th-20th), and begin main Theme Voting. Special thanks again to Sorceress for preparing the theme list for me. I’m in! April 14th, 2014 3:44 am Sorry for the choppiness. Anyway, I’m in! I’m in as well April 14th, 2014 12:34 am 2nd time LD for me. Will be using C++ and probably the SFML library. Good luck everyone! My third Ludum Dare! April 13th, 2014 9:11 pm Hello, This will be my third ludum dare and I am exited! This time I am making an accessibility first approach, complete code designed to run in browsers. Language: Javascript/HTML5Editor: Sublime? I have just tried Phaser and it looks really good. Have fun and make great games. LD 29… I am IN! April 13th, 2014 8:53 pm So I am entering LD this time with a partner, Crusable, who has been a part of the last one. In!

Gapless looping MP3 tracks The MP3loop utility, user interface This article has two objectives: to be a "how-to" guide for creating an MP3 track that can loop gaplessly, and to give the details of how it works. The first section is pragmatic: it simply tells you what you need and how to use it. If you are more interested in knowing how the ready-made software performs the trick, you will find the answers in the second part of this article. Especially the second section assumes that you know a bit of digitized audio and that a DOS box (or "console") program does not scare you. Downloads The MP3Loop utility - for Microsoft Windows (563 KiB, version 1.4A) that serves as a proof-of-concept of the technique described in this article. Part 1 - Creating loops The first step in creating an MP3 track that loops without gap or "plop", is to have a gapless looping clip as an uncompressed "WAV" file. The WAV file may be mono or stereo, but it must use a 16-bit sample resolution; 8-bit files are not supported. What you need

Forums With the new year comes updating all of the copyright information to 2012. One thing that I do is I have my “Owner” and “Copyright” information set on my Canon EOS 50D camera body. What this does for me is the camera will auto-insert this metadata into every photo that I capture. For their EOS Utility software, Canon is still using the old practice of only offering “software updates” through their web site, not the full application. What is this update requirement anyways? So if you have an older camera body with a computer using a new operating system, you cannot install the software at all? Luckily with the current versions of EOS Utility, it’ll simply detect the prior version of EOS Utility off of the CD in your CD/DVD/BD drive. After my laptop died last year, I had considered getting a netbook as an ultra-portable replacement for the laptop. After all of this, the next issue arises with this problem. Here comes the next issue.

Christophe Heral and Billy Martin Talk Rayman Legends on Top Score March 6, 2014 Copy and paste the HTML below to embed this audio onto your web page. Audio player code: St. Paul, Minn. — Christophe Héral and Billy Martin collaborated on their second Rayman game: Rayman Legends. It's a winning collaboration, because the music for Rayman Legends is fantastic. Billy lives in LA. Billy sent his scripts overseas for Christophe to supervise the recording of Billy's music. Christophe and Billy each played several instruments as well — Billy recorded all his own guitar, saxophone and flute parts. Christophe plays ukulele, whistles and sings. Christophe references a lot of famous classical melodies throughout the score. If you're in the Boston area, come meet Billy and me at the "Maestros of Video Games" panel at PAX East in the Boston Convention Center on Saturday, April 12th at 12:30 pm ET.

How to Create Concatenated Audio for Mobile Apps The increase in production of mobile phone apps in the past 3 years has opened up some excellent opportunities for the commercial composer. Theme songs, music timers, UI hits and level music are now needed for all mobile apps, be they functional, informational, or game programs. However, mobile app production teams face the same challenge all software development teams do - that of limited real estate. But even worse: some mobile apps can be as small as 10MB - including all art assets, programming, and your audio. This leads most producers working with audio designers to chop down the audio assets to as small a size as possible. Example 1: Timer Step 1 Let's take a simple example first. The Full Timer Step 2 Here's where concatenation comes in. As you can hear by listening to it, and see by examing the wave file in Logic, the timer consists of essentially four sections: Let's break those up in Logic by using the Scissor Tool. Step 3 Cell 1 - bounced Cell 2 - bounced Cell 3 - bounced Step 4 A. B.